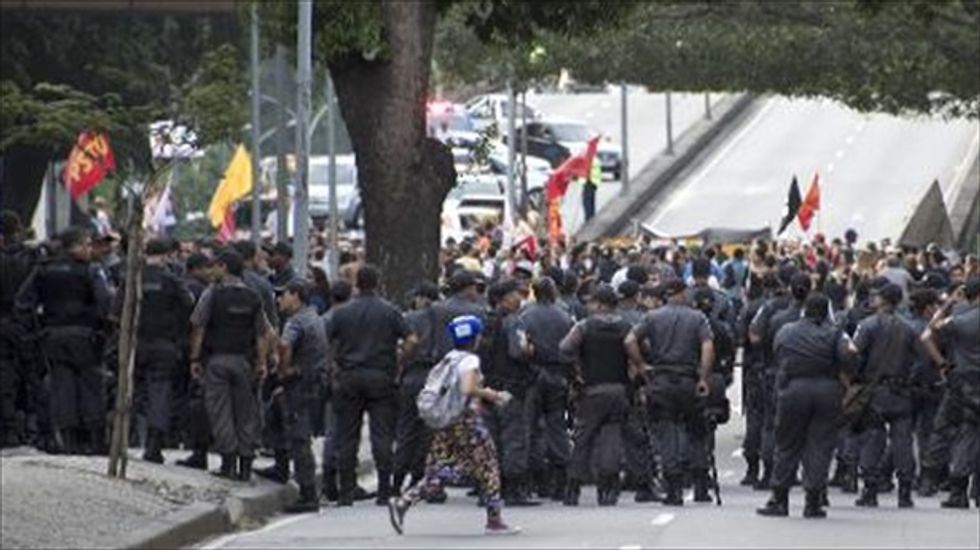 Brazil said Friday it is mobilizing 157,000 soldiers and police to ensure security during the World Cup, which opens in 20 days against a backdrop of violent protests and strikes.

The defense ministry said it would provide 57,000 navy, army and air force personnel for the event, including 21,000 who will be on a state of alert for situations requiring immediate intervention.

The ministry has invested 709 million reais ($322 million) since 2012 in modernizing its forces and preparing them for the tournament, which runs from June 12 to July 13.

Justice Minister Jose Eduardo Cardozo said he did not believe the recent string of demonstrations and strikes across Brazil would escalate to the level of protests that gripped the country last year during the Confederations Cup, a World Cup dress rehearsal.

Those protests drew a million people into the street and turned violent at times, embarrassing the tournament's organizers.

"Our feeling is that (the protests) will be smaller than the ones last June. But, sincerely speaking, we are prepared for any situation," Cardozo told journalists at a joint press conference with Defense Minister Celso Amorim.

The protesters are angry over the more than $11 billion being spent to host the World Cup in a country with glaring inequality and pressing needs in education, health care, housing and transport.

The security forces will be spread among the 12 host cities and state capitals Vitoria, Aracaju and Maceio, which will all have base camps for teams playing in the tournament.

The military will also work with police to secure the enormous South American country's 16,800 kilometers (10,400 miles) of borders.

The anti-World Cup protests have shrunk in numbers since last year, but have also grown more radical.

As the tournament approaches, a series of police strikes -- plus the threat of a nationwide strike by federal police -- have also raised concerns about security in a country with one of the world's worst crime rates.

Around three million Brazilians and 600,000 foreign tourists are expected to attend the World Cup.