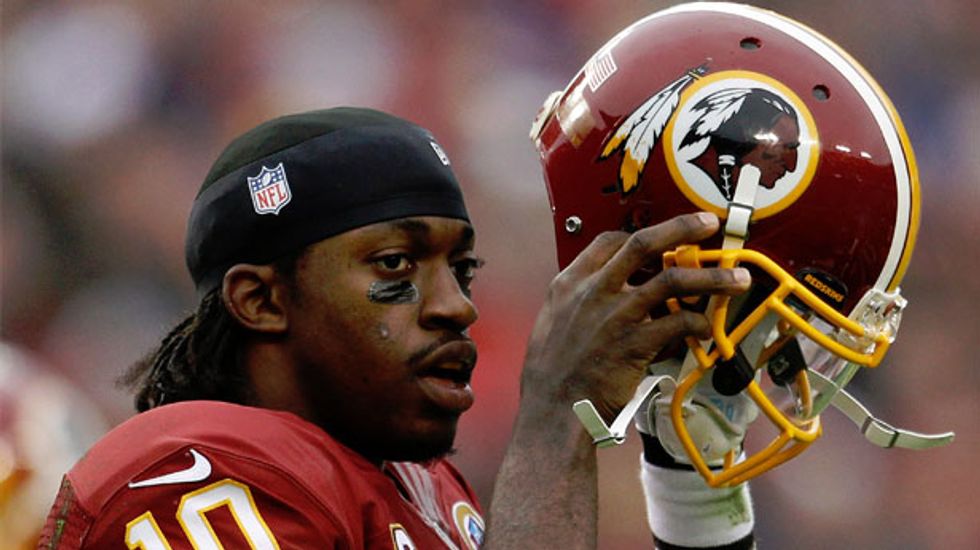 WASHINGTON (Reuters) - Fifty U.S. senators urged the National Football League on Thursday to endorse a name change for the Washington Redskins, saying the franchise's name was a racial slur.

In a letter to NFL Commissioner Roger Goodell, the lawmakers said the league should follow the example of the National Basketball Association, which has banned Los Angeles Clippers owner Donald Sterling for life for bigoted remarks.

"Today, we urge you and the National Football League to send the same clear message as the NBA did: that racism and bigotry have no place in professional sports," wrote the senators, all of them Democrats or independents.

"It's time for the NFL to endorse a name change for the Washington, D.C. football team."

The letter adds pressure on Dan Snyder, the Redskins' main owner. He has defied calls from activists and journalists for 14 years to change his team's name and Indian logo.

Native American groups have fought for the name change in court and through advertising campaigns. Even President Barack Obama has weighed in, saying that if he owned the team, he would consider changing the name.

The letter was led by Senator Maria Cantwell of Washington, a Democrat, and Senate Majority Leader Harry Reid of Nevada, and signed by 47 other senators. Senator Bill Nelson, a Florida Democrat, sent a separate letter to Goodell.

Goodell said in January that most football fans and most Americans backed the Redskins' keeping their name.

NFL spokesman Brian McCarthy said in a statement that the league had not received the letter, but that the NFL has long shown a commitment to progressive leadership on diversity issues.

"The intent of the team's name has always been to present a strong, positive and respectful image. The name is not used by the team or the NFL in any other context, though we respect those that view it differently," he said.

A spokesman for the Redskins did not immediately respond to a request for comment.

Forensic psychiatrist Bandy X. Lee spoke with Scientific America this week about the next steps for weaning supporters of Donald Trump off of the president's pathological manipulation.

Republican U.S. Rep. Lauren Boebert of Colorado is facing a lawsuit for allegedly violating the First Amendment rights of her constituents, including a former lawmaker.