Jellyfish are the most energy efficient swimmers, new metric confirms 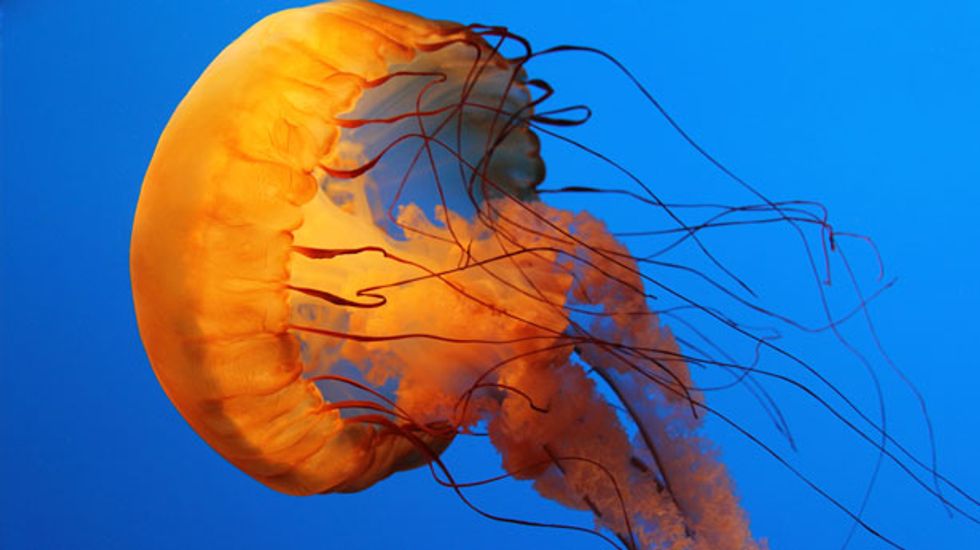 By Akshat Rathi, The Conversation

Even though a blue whale is much heavier than a tuna, the mammal consumes less energy per unit weight than the fish when they travel the same distance. For years, these sort of comparisons have dominated our understanding of the energy efficiency of animal movement, which is important for designing vehicles inspired by nature, such as underwater drones.

But Neelesh Patankar, professor of mechanical engineering at Northwestern University, believes that this measure has only limited benefit. Instead, with his colleagues, he has come up with a new measure that allows comparison of animals as small as bees or zebrafish with animals as large as albatrosses or blue whales.

The new measure has two implications. First, among those that have typical swimming and flying actions, which includes most fish and all birds, each animal is as energy efficient as it can be. This means that, given their size and shape, each animal is able to spend the least amount of energy to move the most distance. Second, this measure confirms a previous finding that jellyfish are unusually energy efficient, beating all the thousands of fish and birds Patankar studied.

“Put another way, a whale and a tuna are equally energy efficient,” Patankar said. “Except jellyfish, which have an unusual action that makes them more efficient.”

To understand why jellyfish are special, we need to first answer the question why we need a new measure for energy efficiency. Patankar offers an analogy: if there are two cars that are of equal weight, would you expect them to have the same mileage? Just as in cars, animals' motion will vary based on factors other than their weight.

John Dabiri, professor of aeronautics and bioengineering at California Institute of Technology, said, “It is not immediately obvious how to compare the swimming efficiency of a bacterium and a blue whale, for example, but Patankar and colleagues have developed one.”

To make the comparison, Patankar borrowed from a well-known concept in physics called the Reynolds number, which explains the relationship between two forces that act on any body that is moving through a fluid. The first is viscous force, which is, crudely put, the push you feel when you put your hand out of a moving vehicle. The second is inertial forces, which is the tendency of a moving object to keep moving (or that of a stationary object to remain stationary).

Depending on the size of a body and the speed at which it travels, the body faces either a low Reynolds number, where the forces acting on a body are mostly viscous forces, or a high Reynolds number, where inertial forces dominate. This creates a natural difference in how much energy is spent countering these forces.

Reynolds number was developed to look at the aerodynamics of stiff bodies, such as aeroplanes and ships. But Patankar reckoned he could use it to help compare animals of different sizes. He gathered data from thousands of birds and fish to come up with a metric called the energy-consumption coefficient, which he has described in the Proceedings of the National Academy of Sciences. Using it, he found that all the animals he looked at (except jellyfish) are as energy-efficient as they can be.

Note that Y-axis is for energy-consumption coefficient, not for energy efficiency.

“The idea that animals are tuned for energy-efficient locomotion is not surprising, but the authors have devised a fresh approach to the issue of how to compare the efficiencies of different animals,” Dabiri said.

Patankar finds, as he had hoped, that small animals find themselves in low Reynolds number situations, and large animals find themselves in high Reynolds number situations. This means they expend energies differently, which is what Patankar’s coefficient represents. Using the coefficient, one can compare the energy efficiency of bodies weighing few grams to many tonnes.

The coefficient also indicates that animals that fly are less energy-efficient than those that swim. This, Patankar thinks, must be because those in flight have to expend more energy to counteract gravity than those in water.

While working on the energy-consumption coefficient, he came across recent work done by Dabiri and his colleagues which showed that the unique contract-and-relax action of jellyfish allowed it to recapture some of the energy it spends on motion. This means a jellyfish can travel a lot more distance for the same amount of energy spent by other animals adjusted for its weight and size.

When Patankar used Dabiri’s data and plotted it on his energy-consumption coefficient chart, he found that the only animals that were more energy efficient than he had predicted were jellyfish.

“We found that each swimming or flying animal can spend all the energy it has at its disposal. However, our coefficient is a fair way to conclusively show that indeed jellyfish are more efficient,” Patankar said.

Dabiri is already working on exploiting jellyfish propulsion. However, he thinks that, apart from providing a new metric to compare different types of animals on the energy-efficiency scale, Patankar’s measure could be a used for evaluating the performance of aerial and underwater drones that are being developed, especially those with designs that are inspired by flying and swimming animals.

As the House of Representatives formally sent an article of impeachment against Donald Trump to the Senate on Monday for the former president's upcoming trial for inciting this month's deadly attack on the U.S. Capitol, a leading progressive advocacy group implored Senate Majority Leader Chuck Schumer and Minority Leader Mitch McConnell to preclude lawmakers who supported the January 6 insurrection from the proceedings.On Monday evening, House impeachment managers delivered a single article of impeachment against Trump—who is the only president to have been impeached twice—to the upper chamber of Congress. In that legislative body are 11 Republicans who supported efforts by Sens. Josh Hawley (R-Mo.) and Ted Cruz (R-Texas) to thwart the peaceful transition of power to President Joe Biden by challenging certification of the Electoral College vote for the 2020 presidential election.

The offending senators' at least tacit embrace of Trump's myriad lies and conspiracy theories regarding the election has been blamed for helping to incite the mob that attacked the Capitol in a failed bid to overturn the election results. In the wake of the attack, House Democrats including Rep. Alexandria Ocasio-Cortez (D-N.Y.) have called on Hawley and Cruz to resign or be expelled from the Senate, while a group of Democratic senators has filed an ethics complaint against them.