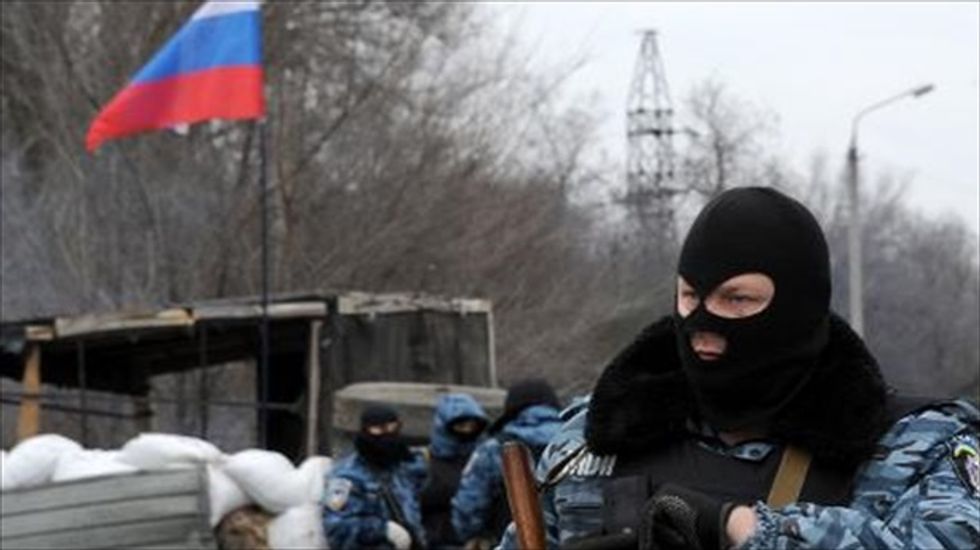 Separatist rebels killed at least nine Ukrainian soldiers in the restive east on Thursday, dealing a heavy blow to the beleaguered government just three days before a crunch presidential poll.

The attacks were the deadliest for the military since it launched an offensive six weeks ago against a pro-Moscow insurgency that is threatening to tear the country apart.

Western pressure is mounting on Russia not to interfere in Sunday's vote, and NATO suggested Thursday that it had seen the first firm evidence of Moscow following through on a promise to pull back its forces from the Ukraine border.

But rebels in Ukraine's heavily-Russified eastern industrial regions of Donetsk and Lugansk are showing no signs of scaling back resistance to what they regard as an illegitimate government in Kiev.

The Ukrainian defence ministry said the worst of the two overnight attacks saw the insurgents blow up a military vehicle after volleying mortar shells and grenades at a roadblock set up by government troops near the Donetsk region town of Volnovakha.

It said eight men were killed and another 17 wounded in Volnovakha, while another soldier was killed and two injured in a strike near Rubizhne in Lugansk.

Kiev's interim government launched its so-called "anti-terrorist" operation in mid-April aimed at crushing the rebels who have seized more than a dozen eastern cities and towns.

An AFP toll compiled through UN and Ukrainian government sources puts the number of deaths suffered in fighting across the east since mid-April at around 140.

President Vladimir Putin -- his government wary of devastating sanctions threatened by Washington and its European allies -- has so far refrained from recognising the legitimacy of the separatists' self-declared republics in Lugansk and Donetsk.

He has also ordered the withdrawal of some 40,000 forces that Russia began massing along its ex-Soviet neighbour's eastern border after seizing Ukraine's Black Sea peninsula of Crimea in March.

NATO chief Anders Fogh Rasmussen said Thursday he has seen some evidence of "limited Russian troop activity in the vicinity of the border with Ukraine that may suggest that some of these forces are preparing to withdraw."

Putin rejects the legitimacy of the pro-Western team that toppled a Moscow-backed president in February on the back of a massive wave of street protests.

But he has given only the most grudging backing for an election that is all but certain to bring a pro-Western president to power who will seek to fold the nation of 46 million more fully into Europe and break for good its historic dependence on Russia.

"What is important is not the election itself," Putin said Thursday during a visit to China.

"What is important is that (Kiev) repairs relations with the regions so that people start feeling like full-fledged citizens again," he said.

US Vice President Joe Biden warned Putin that Russia's economy -- already approaching recession -- would suffer immediate consequences should Russia be judged to have interfered in the vote.

"If Russia undermines these elections on Sunday, we must remain resolute in imposing greater costs," Biden told reporters in Bucharest on Wednesday.

The Donetsk and Lugansk regions have a population of nearly seven million and represent the heartland of Ukraine's Soviet-era industrial rust belt that churns out more than 15 percent of the country's economic output.

On Thursday, the self-proclaimed leader of Lugansk proclaimed martial law and called for the full mobilisation of men between the ages of 18 and 45.

Rebel commanders -- all of them unheralded figures who speak fluent Russian but denied any Kremlin intelligence links -- have been ratcheting up the rhetoric as the crucial vote they have vowed to disrupt nears.

"The Ukrainian forces are demoralised and are pleading for negotiations," Russia's RIA Novosti state news agency quoted Bolotov as saying.

Sunday's poll pits the overwhelming favourite Petro Poroshenko -- a 48-year-old confectioner whose chocolate factories have been shuttered in Russia on dubious health and safety grounds -- against nearly 20 challengers including the divisive nationalist ex-premier Yulia Tymoshenko.

But many who still fondly recall the heady early days of the protest movement that congregated around Kiev's Independence Square -- known locally as Maidan -- say all the candidates represent a part of the old guard that has proven its inability to pursue change.

"I view most of most the presidential candidates with disgust," said 29-year-old Kiev museum worker Andriy. "They all represent the old regime."