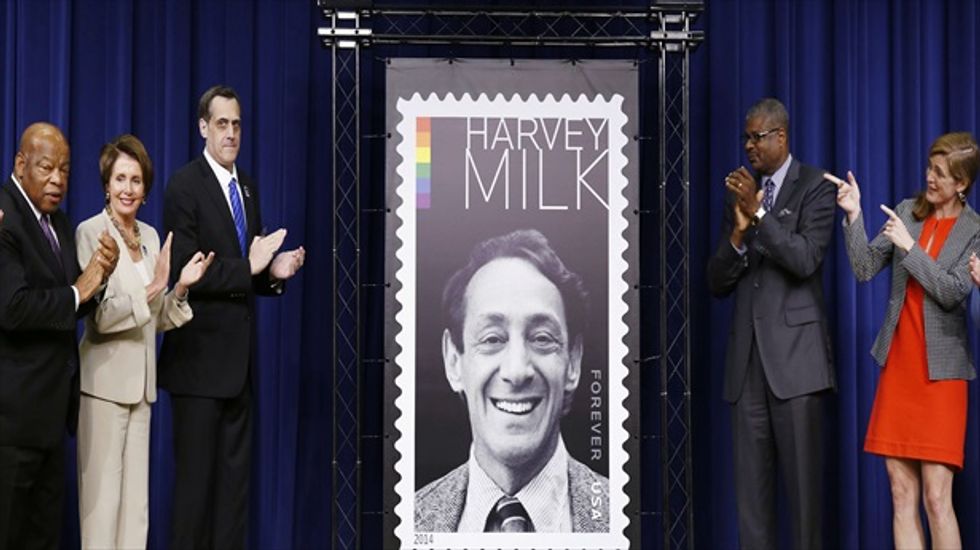 WASHINGTON (Reuters) - U.S. officials honored slain gay rights activist Harvey Milk on Thursday with the unveiling of a new postage stamp, and called for more work to advance the cause for which he gave his life.

Milk, one of the first openly gay politicians in the United States, was assassinated in 1978, a year after winning election to the San Francisco Board of Supervisors.

U.S. Ambassador to the United Nations Samantha Power noted at the White House event that there still were seven countries where it was legal to execute people for being homosexual.

She added her voice to a White House push for legislation that would ban U.S. workplaces from discrimination based on sexual orientation. She mentioned Michael Sam, who recently became the first openly gay player to be selected in the National Football League Draft.

"Postage stamps will not change that, legislation will."

The stamp has a black-and-white picture of a smiling Milk and his name in large, capital letters.

Nancy Pelosi, the Democratic leader in the U.S. House of Representatives, reflected on attending Milk's funeral after he and San Francisco Mayor George Moscone were gunned down.

"I thought, is this how it ends?" she said. "But it really was just the beginning of the impact that he ... would have. So it's pretty thrilling for us who knew and loved him and saw his courage first hand."

She said being on a postage stamp was a privilege reserved for very few and said it was appropriate that Milk was one of them.

Members of Milk's extended family attended the unveiling of the stamp, which took place in a building next to the White House.

"The United States has come a long way," Erik Milk, 28, a grand nephew of the slain leader, told Reuters.

"Probably he never would have thought that anything like this, of this magnitude would have ever happened, but you know, all of his efforts paid off in the long run."

Stuart Milk, president of the Harvey Milk Foundation, said the stamp would help advance the cause of gay rights abroad.

"We have to teach history so that we don't repeat history, and so this is a great way of doing that," he said in an interview.

Mike Lindell, the Trump-loving CEO of MyPillow, made several bizarre claims this week in an interview with conservative talk show host Eric Metaxas in which he detailed how China supposedly stole the 2020 election from President Donald Trump.

While appearing on Metaxas's show, Lindell said that his own "research" has shown him that China turned a mysterious "wheel" that gave Biden additional votes.

University of Kentucky student from West Virginia who was caught in video inside the Capitol on Jan. 6 is now facing multiple charges, WCHS reports.