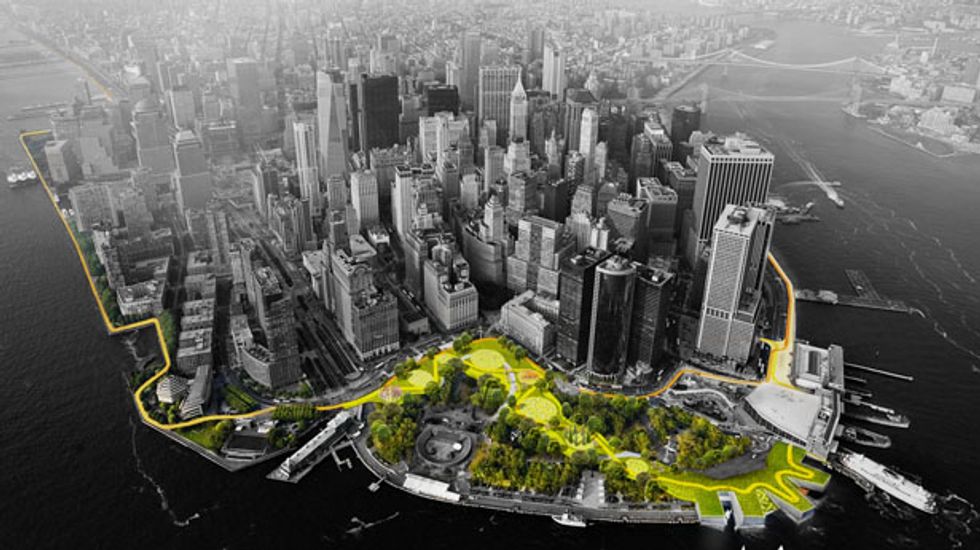 By Colin Thorne, University of Nottingham

When Hurricane Sandy struck New York in 2012, it was a brutal wake up call for the Big Apple. That call should have also been heard by the citizens of every other coastal city and those responsible for ensuring their safety – though there is little evidence that it has.

Sandy was the largest ever recorded Atlantic hurricane and, after Katrina, the second most costly, causing damage of around US$70 billion in the US alone. Hundreds of people were killed and hundreds of thousands made homeless along the storm’s path through the Caribbean, US, and Canada. But while 24 US states were affected, it was the inundation of Lower Manhattan that generated the largest shock waves.

The death, destruction and general havoc wreaked by Sandy laid bare the inadequacies of current approaches to coastal flood risk management, generating a storm of public outrage. Hurricane Katrina’s devastation of New Orleans in 2005 had been bad enough, but images of one of the world’s most iconic coastal cities being inundated by a storm surge despite several days advance warning were truly shocking. If it could happen to New York City, isn’t every other coastal community also at risk of catastrophic flooding? The scientific answer to that question is, of course, an emphatic yes.

The Rebuild by Design competition held to promote radical new approaches to protecting the city has now identified six winning projects, and it’s apparent that all are substantially based on using green and blue infrastructure to provide more natural and flexible defence than concrete walls. These defences work by mimicking the natural functions of coastal wetlands, woodlands, barrier beaches and offshore reefs in sapping the energy of waves and storm surges to reduce their height and rob them of destructive strength. Between storms, they provide a wide range of habitats necessary to support diverse ecosystems, providing leisure and commercial opportunities, including lost natural resources such as fisheries and oyster beds.

The lesson from Sandy is that while there are good reasons why huge population centres have developed adjacent to and just a few feet above the ocean, living there involves flood risk – a risk that cannot be eliminated, but can, and must, be reduced to a level that is acceptable, or at least tolerable. This applies not only to coastal cities in the US, but to every coastal conurbation and, especially, to Asian mega-cities. Easily said, but how can this be done?

It won’t be through business as usual, or even incremental changes to conventional flood risk management approaches. Following the European floods of the late 1990s and early 2000s, the UK government’s Flood Foresight paper reinforced the message that hard choices have to be made. It’s such a pity that, with subsequent severe flooding in Britain and elsewhere, from Australia to Zimbabwe, it seems the lesson has to be learned repeatedly and the hard way.

Unlike New York, New Orleans does not benefit from being home to the world’s financial capital.

The need for radical new thinking did not go unrecognised in New Orleans. But the understandable, though scientifically and socially flawed, decision to simply rebuild breached defences and devastated neighbourhoods prevailed. Proposals to re-locate communities away from highest risk areas and return the most vulnerable land to its previous role of providing natural flood protection were ignored. Even the Green NOLA design competition in 2006, which set out to deliver “visionary yet practical responses” to the city’s problems, lacked the backing it needed from the authorities.

But the Rebuild by Design competition is different to that in New Orleans. It has the backing of the Federal Department of Housing and Urban Development, which gives the winning designs a real chance of being built. The designers seem to have engaged directly with communities and business owners at risk to find solutions that are not only radical, but which reflect the preferences of the people who will live and work around them every day.

It is an uncomfortable truth that the level of flood defence that can be provided to a community is limited by the value of the assets at risk. The solution has to make sense economically, which is why London is protected against a one-in-a-thousand-year flood, while Hemsby on the Norfolk coast is economically undefendable.

In Lower Manhattan, not just densely packed public housing, iconic buildings, and infrastructure such as the subway and electricity sub-stations are at risk, but Wall Street itself. This explains why there’s substantial funding available to provide protection against another Sandy-sized surge. The winning concept for Lower Manhattan, a green design that includes parkland and a banked earth flood wall around the tip of the island named the “Big U”, is costed at US$335m – a considerable sum but easily justified when compared to what’s at risk.

The aim of using blue-green infrastructure in place of the old fashioned grey kind is to recreate a naturally-oriented water cycle that contributes to the amenity of the city by bringing together water and environmental management. This is achieved by combining and protecting the hydrological and ecological values of the urban landscape while providing resilient and adaptive measures to deal with flood and drought events. In this spirit, the Big U creates publicly accessible green spaces that will deliver social, economic and environmental benefits even when the defences are not keeping out storm surges, which is of course most of the time.

The project’s other great advantage is that it’s adaptable. Not only will it provide protection now, it also allows for a planned retreat from the coastline should that be necessary in future. This could be the case if, for example, melting of the West Antarctic Ice Sheet drives a larger than expected rise in sea level: unlikely, but not impossible.

But what about neighbourhoods not home to a global financial hub? Neighbouring communities on Staten Island and in Hoboken, New Jersey, are typical of dozens of ordinary towns and cities along the east coast affected by Sandy. While in sight of Manhattan, they are in different leagues, economically. They too were considered in Rebuild by Design, leading to five winning projects for other areas around the coasts of New York City and New Jersey, and running the total cost up to around US$1 billion.

On the other hand Hoboken is envisaged as a Resiliency District where, by reducing the vulnerability of homes, businesses and infrastructure to flooding that cannot be prevented economically, it is hoped public-private finance will step in to support badly needed urban renewal. The initial cost of US$230m is affordable, but is just the start, and building a resilient community will require concerted, long-term investment by government and local businesses, which makes the future for Hoboken rather less secure than that of Lower Manhattan, or even Staten Island.

In it for the long term

The Rebuild by Design competition has produced worthy winners that address current flood risks effectively and affordably, while leaving space for adaptation to an uncertain future, recreating lost habitats and providing public green spaces of considerable socio-economic value. The winning solutions are sustainable in that they use science responsibly to conceive radical solutions that offer economic security while greening the urban landscape and restoring shoreline environments.

But the jury is still out on whether even these radical new approaches can deliver these benefits in ways that are socially equitable. In practice, this will depend more on good governance than creative engineering, something outside the scope of any design team. Achieving social justice in flood risk management relies on the willingness of people not just to get involved but to stay involved long after the damage of the trigger event has been repaired and the trauma, though dreadful, has passed. If Rebuilding by Design can lay the foundations for long-term community engagement in managing flood risk in New York and New Jersey it will fully deserve all the plaudits it looks likely to receive.