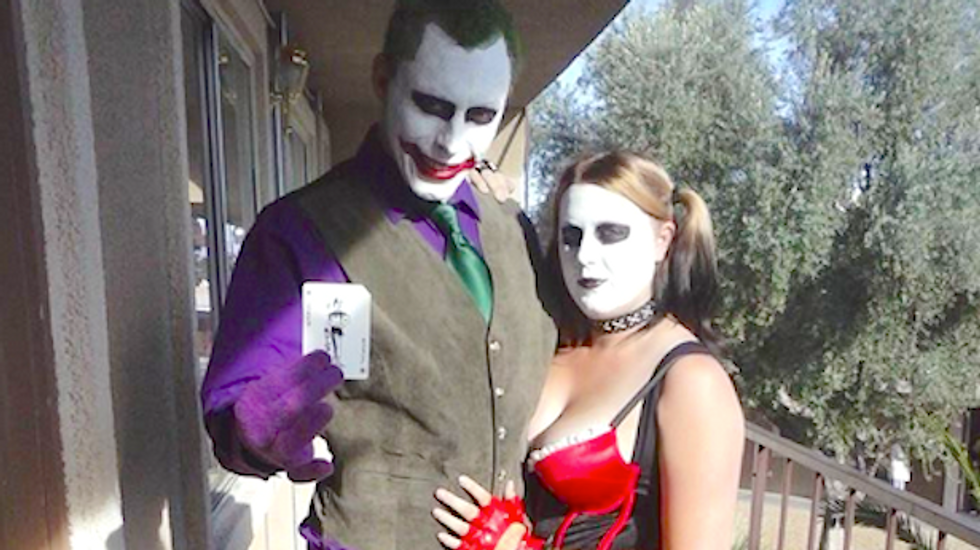 Jerad and Amanda Miller had lived in Nevada for only five months, but the couple quickly established political ties in their new state before gunning down two police officers and a bystander in Las Vegas.

The couple each claimed in social media that they moved from Indiana to support the gubernatorial campaign of David Lory VanDerBeek, who said he had spoken to them five times at campaign events and communicated with them through social media and text messages, although not for at least two months.

VanDerBeek told The Raw Story that the Millers seemed to “a nice, loving couple” who were always friendly and polite to others, but he admits he found it strange they would move to another state without jobs or other plans.

He suspects his criticism of some police tactics -- such as no-knock raids -- resonated with the Millers.

"There are lots of great cops, and there are those who are overly aggressive and act outside the bounds of what Americans would normally consider," said VanDerBeek, adding that police officers who burst into private homes without warning put themselves in danger of getting shot by homeowners.

VanDerBeek, a licensed clinical marriage and family therapist, said he suspected Jerad Miller might have suffered from mental illness, which he said would have been made worse if he was using illegal drugs.

“I wish I could have had more access to them,” said VanDerBeek, who is trained to steer people with mental health issues toward the resources they need.

Police said the couple shot and killed two police officers at close range and a man who planned to use his legally carried concealed weapon to stop them. Officers killed Jerad Miller during a shootout and Amanda Miller apparently shot herself.

“It doesn’t make sense to me,” VanDerBeek said. “They couldn’t even get a gun at the Bundy ranch, so how did they get all these weapons?”

Police have not said how Jerad Miller, a convicted felon, and his wife purchased the weapons used in Sunday’s shooting spree, but they told another Nevada candidate they sold all their belongings for equipment needed to join the ranch standoff.

Howard Scheff, another American Independent candidate, said he met the couple in March, at a rally against Common Core, and saw them again the following month at another rally and then at the Bundy ranch.

Amanda Miller had legally purchased a shotgun and semiautomatic pistol carried by her husband, Scheff said, and she carried a revolver.

Scheff, who’s running for the District 42 seat in the Nevada statehouse, said he liked the couple, who were about the same age as his own children, but he quickly realized Jerad Miller could not remain at the ranch.

He learned that Jerad Miller was a convicted felon, although he continued to carry guns – including an AR-15 someone had loaned him during a patrol shift – and he received a disturbing text during a visit home to Las Vegas.

“’You need to get back here, it’s going down,’” Scheff said Jerad Miller told him in the message. “’They’ve got drones in the sky, they’ve got guys coming in to attack us.’”

Scheff said he called the Bundy family, who said nothing had changed since he left the ranch, and he found Jerad Miller even more “amped up” when he returned.

“’I’m going over to the (Bureau of Land Management) base camp to get this started,’” he said Jerad Miller told him.

Scheff brought his concerns to militia members who had been handling security during the standoff, and they agreed to tell Jerad Miller he had failed a background check.

“They just told them to leave, and he cried – hysterically cried, so emotional my heart broke,” Scheff said. “He wanted to do the right thing, but he didn’t know how to do that.”

Scheff and the militia members offered to put the couple up in a hotel in Mesquite to act as their “eyes and ears” there, but the Millers instead went back to Las Vegas.

He reached out to the Millers a couple of weeks later, in early May, and offered a ride to see Cliven Bundy speak at an Independent American Party event, but Scheff said the couple never replied.

Scheff said he was more concerned that Jerad Miller’s status as a felon would reflect poorly on other Bundy supporters, and he never seriously considered the younger man might be violent.

“Before the day before yesterday, did you know he was a killer?” he said.

VanDerBeek, who admitted he’s been described in media accounts as a conspiracy theorist, said he isn’t interested in “revolution,” but rather in “constitutional restoration.”

“I’m open to discuss conspiratorial issues with anyone, but a lot of that crowd can be crackpots,” VanDerBeek said before comparing the Obama administration to Nazis.

“More than likely there will be a revolution or civil war, but this is not how it needs to happen,” posted the American Independent Party. “We should pick up arms only as a last resort and only in self-defense. This was neither -- it was murder. If there is to be shooting, let the enemy fire the first shot, not us.”

The group complained that media accounts compared conspiracy theorists to murderers, and then followed that post with another linking to a New York Times article on the increasing militarization of local police departments.

“Remember that standing army our Founders warned us about? This is it,” the party warned on its Facebook page.

Jerad and Amanda Miller also sought ties to Gordon Martines, a former Las Vegas police detective running for sheriff of Clark County – where Bundy lives – who has vowed not to send law-abiding citizens to FEMA-operated camps.

“The shooters came to Nevada and reached out to our campaign to work and we had to deny their involvement after getting to know them and finding out their background and drug use was counter productive to our goals and beliefs,” the Martines campaign posted on Facebook. “It is sad and inconceivable that anyone would take lives in this manner and we send out our prayers and condolences to all family and friends of the fallen.”

Martines, who has also promised not to enforce Clark County’s handgun registration laws, took part in a Feb. 8 debate hosted by former Arizona sheriff Richard Mack – who posed for a photo with Jerad Miller.

Mack, who is a hero in the posse comitatus movement, said he was “shocked” to learn of Jerad Miller’s political ties.

“Oh, no. I was afraid that he might have been at the Bundy ranch,” Mack said. “As soon as I heard about it, I was afraid of that.”

Other groups for which the Millers expressed support denounced their actions.

“TTPC has always supported members of law enforcement and the military who honor their oath,” posted The Three Percenters Club. “The recent shooting was nothing more than premeditated murder by two cowards. TTPC does not condone these types of actions, nor will we ever. It is unfortunate that true patriot groups do have ‘bad apples’ amongst them, as all groups do. Do not allow yourselves to be drawn in by these hate mongering extremists.”

Patriot Nation blasted liberals for linking "right-wing pages" such as their own in connection with the shooting, claiming that the "Don't Tread On Me" flag and swastika symbols left with the officers' bodies show the Millers were "unstable psychopaths."

"The Gadsden flag and the Nazi flag are at two different ends of the political spectrum, with the Gadsden symbolizing liberty and the Nazi symbolizing genocide and oppression," Patriot Nation posted. "The fact that both were found to be in possession is a clear indication of the misguided state of mind these two individuals had."

Jerad and Amanda Miller expressed admiration for conspiracy theorist Alex Jones and apparently posted on his InfoWars website, and the talk radio host complained about media coverage linking him to the shootings – which he claimed were a false flag operation carried about by the government.

“We are in the middle of a globalist revolution against this country right now, and my gut tells me that the cold-blood degenerate evil killing of two police officers and a citizen in Las Vegas yesterday is absolutely staged,” Jones said.