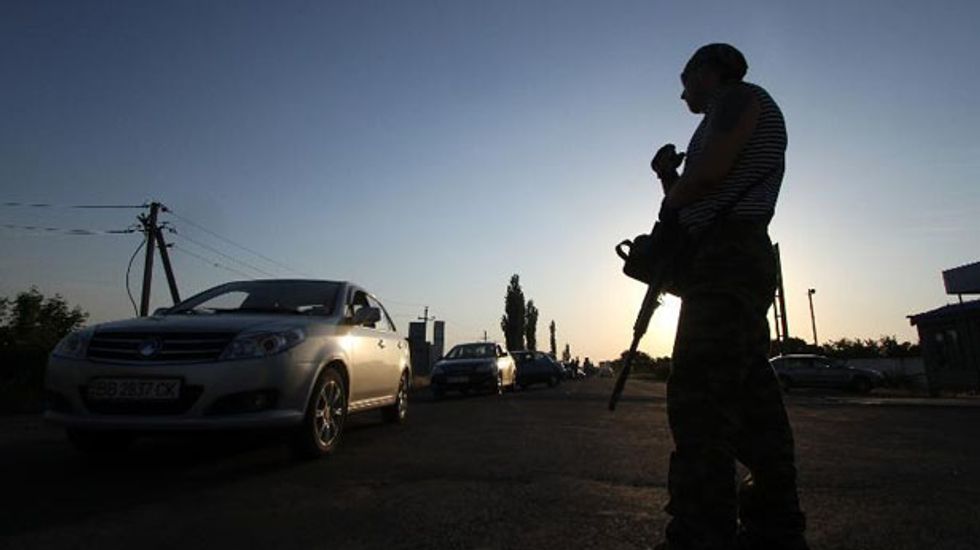 NATO on Thursday reported another build-up of Russian forces near Ukraine as its new president put in place key pieces of his pro-Western government and embraced an EU trade pact that has been bitterly fought by the Kremlin.

Ukraine's parliament unanimously confirmed as foreign minister Pavlo Klimkin -- a charismatic 46-year-old ambassador to Germany who had spearheaded the EU negotiations and now represents Poroshenko at closed-door talks with Moscow.

Those high-stakes meetings and Poroshenko's late-night phone exchange on Tuesday with Russian President Vladimir Putin bolstered hopes for a solution to Ukraine's worst crisis since independence in 1991.

Poroshenko promised to soon unilaterally halt the army's 10-week push against pro-Russian insurgents who have proclaimed independence in Ukraine's eastern rustbelt -- a plan some fighters rejected but Moscow cautiously endorsed.

"We wish the new minister success and are ready for contact with him," the Russian diplomat said.

But the Kremlin's good will was immediately put in question by new charges from NATO that Putin had seen "at least a few thousand more" troops to the border in a reversal of a withdrawal he had begun at the start of the month.

"It seems that Russia keeps the option open to intervene further into Ukraine."

NATO's findings -- met with stony silence in Moscow -- came on the heels of US charges that rocket launchers and even tanks were starting to cross the Russian border into the conflict zone.

Daily clashes that have now claimed at least 360 lives saw the Ukrainian border guard services on Thursday report "stepped up activities by rebel groups" near the Russian frontier.

US President Joe Biden called on Russia "to stop the flow of weapons and militants across the border and to exercise its influence among the separatists... both of which Russia has thus far failed to do."

Poroshenko was certain to irritate Putin on Thursday by vowing to sign the trade and economic relations portion of an historic EU pact in Brussels on June 27.

The old Kremlin-backed leadership's rejection of the EU Association Agreement in November sparked months of deadly protests that led to the February ouster of president Viktor Yanukovych.

The interim government headed by Prime Minister Arseniy Yatsenyuk signed the political relations portion of the deal in Brussels on March 21.

But Kiev delayed signing the economic section because it demanded that Ukraine lift import barriers aimed at protecting its farmers and steel mills in the east from direct EU competition.

The complete pact's signing will effectively cut Ukraine off from a Moscow-led economic alliance of a few former Soviet nations championed by Putin.

Russia on Thursday once again threatened to impose trade restrictions against Ukraine should it sign the full EU deal.

Poroshenko intends to keep Yatsenyuk -- a 40-year-old economist embraced by the West -- and most members of his cabinet.

The ministers represent the European aspirations of the energetic crowds that engineered Ukraine's second pro-Western revolution in a decade and are still viewed by many as the voice of the people.

But Poroshenko -- a 48-year-old chocolate baron with substantial knowledge of Western finance -- realised that he must act quickly to save Ukraine from spiralling inflation and a banking sector collapse.

"I think that my appointment is a positive signal to bankers," Gontareva told reporters on her way out of the confirmation hearing.

"I hope it also will be a positive signal for foreign investors."

Gontareva has worked in international financial institutions for nearly two decades and held top positions in the Kiev branches of the Amsterdam-based ING Bank and France's Societe Generale.

She will play a vital role in turning around the economy by implementing painful economic reforms prescribed under the terms of a $17-billion (12.5-billion-euro) IMF rescue loan.

"She has a good understanding of financial culture," said Vasyl Yurchyshyn, an analyst with the Razumkov Economic and Political Studies Centre.

"We should expect more transparency, openness and clarity in the central bank's work."