Obama on military aid to Iraq: 'I don't rule out anything' 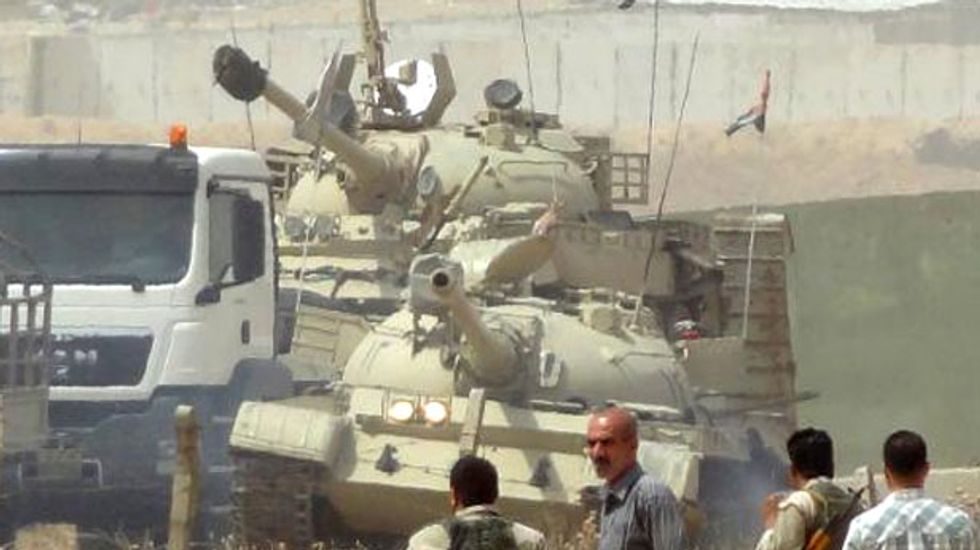 Jihadists moved nearer to Baghdad Thursday after capturing a town just hours to the north, as President Barack Obama said Washington was exploring all options to save Iraq's security forces from collapse.

With the militants closing in on the capital, forces from Iraq's autonomous Kurdish region took control of Kirkuk, an ethnically divided northern city they have sought to rule for decades against the objections of successive governments in Baghdad.

Iraqi Foreign Minister Hosyhar Zebari acknowledged the security forces which Washington invested billions in training and equipping before withdrawing its own troops in 2011, had simply melted away.

Obama said Iraq was going to need "more help from the United States and from the international community."

"Our national security team is looking at all the options... I don't rule out anything," he said.

Russia said the lightning gains by the Islamic State of Iraq and the Levant (ISIL), a movement so radical it has been disavowed even by the Al-Qaeda leadership, showed the pointlessness of the 2003 US-led invasion, carried out in the aftermath of the 9/11 attacks in the United States.

Washington found rare common cause with its longtime foe Tehran, with both voicing dismay at the Sunni extremists' advance and pledging to boost aid to Iraq's beleaguered Shiite prime minister.

The militants, who have swept up a huge swathe of predominantly Sunni Arab territory in northern and north-central Iraq since launching their offensive in second city Mosul late on Monday, advanced into ethnically divided Diyala province.

The insurgents captured the town of Dhuluiyah just 90 kilometres (60 miles) from Baghdad, army officers said, as they pushed into a province whose mixed Arab and Kurdish and Sunni and Shiite population has made it a byword for violence ever since the 2003 overthrow of Sunni Arab dictator Saddam Hussein.

ISIL spokesman Abu Mohammed al-Adnani vowed the jihadists would not stop there, but would press on to the capital and the Shiite shrine city of Karbala, visited by millions of pilgrims from around the world each year.

The Shiite-led government in Baghdad has been left floundering by the speed of the jihadist assault.

Prime Minister Nuri al-Maliki said he would seek parliament's authorisation to declare a state of emergency but MPs failed to muster a quorum for the vote on Thursday.

Only 128 out of 325 MPs showed up for the session, a senior official said.

The swift collapse of Baghdad's control comes on top of the loss of Fallujah, west of Baghdad, earlier this year. It has been a blow for Western governments that invested lives and money in the invasion that toppled Saddam.

The Iraqi foreign minister acknowledged the collapse of the security forces in Mosul and other cities had been precipitate, with many personnel melting away after discarding their uniforms.

"It is a setback definitely for the Iraqi security forces, who collapsed in the largest city and abandoned their weapons and equipment," he said.

Zebari said the security forces were mounting a fightback in Tikrit -- the hometown of the now executed Saddam -- and witnesses and officials reported air strikes on the dictator's former palace in the town as well as a former army base taken over by militants in Mosul.

Washington is considering several options for offering military assistance to Baghdad, including drone strikes, a US official told AFP on condition of anonymity.

Resorting to such aircraft -- used in Afghanistan, Pakistan and Yemen in a highly controversial programme -- would mark a dramatic shift in the US engagement in Iraq, after the last American troops pulled out in late 2011.

But there is no current plan to send US troops back into Iraq, where around 4,500 American soldiers died during the conflict.

And NATO chief Anders Fogh Rasmussen said he saw no role in Iraq for the Western alliance in the battle against the jihadists, whose hard core numbers no more than 15,000 fighters, according to Riad Kahwaji, director of the Institute for Near East and Gulf Military Analysis.

Russian Foreign Minister Sergei Lavrov said the spectacular collapse of the Western-trained Iraqi army exposed the failings of the 2003 invasion.

"The events in Iraq illustrate the total failure of the adventure involving the United States and Britain," he said.

And Obama's Republican opponents in Congress were swift to accuse the president of abandoning Iraq in his haste to pull out US troops in 2011.

Senator Lindsey Graham warned a jihadist takeover in both Iraq and neighbouring Syria would create a "hell on earth" and called for the urgent deployment of US air power to "change the battlefield equation."

Turkey said it was holding talks to secure the release of dozens of its citizens kidnapped by Islamist militants in northern Iraq amid international calls for their release.

"We are in touch with all the groups in Iraq including Kurds and Turkmens," a government official told AFP.

The city of Kirkuk, which Kurdish forces took over on Thursday, has Turkmen and Christian minorities as well as a substantial Arab population, some of it deliberately settled by Saddam to undercut historic Kurdish claims to the province's oil wealth.

The Kurds have never given up their claim to the city, returning to war with Baghdad in the 1970s to press their demand for the city to be incorporated in their autonomous region in the north.

The Kurdish minister responsible for the autonomous region's former rebel security forces was targeted by a bomb attack as he made an inspection tour of the city's outskirts on Thursday but escaped unharmed.