St. Louis Archdiocese blames media for leader's confusion over the legality of sex with children 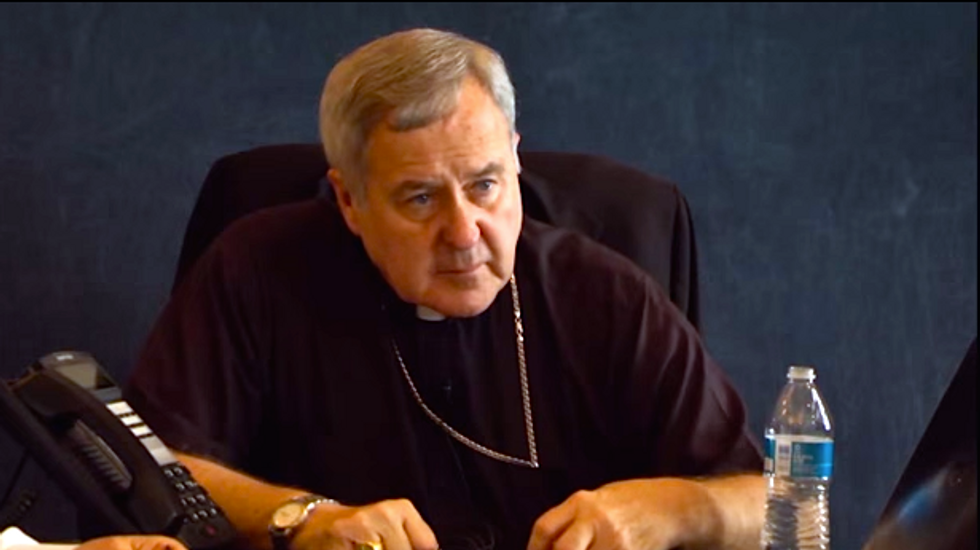 The Archdiocese of St. Louis offered an explanation Wednesday for its leader’s claim to be unaware that priests could not legally have sex with children.

Archbishop Robert Carlson testified during a deposition last month that he was not sure in 1984, when he heard accusations of clergy sex abuse as an auxiliary bishop in the Archdiocese of St. Paul and Minneapolis, that such relations were against the law.

“I’m not sure whether I knew it was a crime or not,” Carlson testified as part of a lawsuit filed in Minnesota. “I understand today it’s a crime.”

The St. Louis archdiocese, which Carlson has headed since 2009, said in a statement that the archbishop’s comments had been taken out of context.

“What Plaintiff’s counsel has failed to point out to the media is that (the archbishop’s attorney) himself noted at this point in the deposition ‘you’re talking about mandatory reporting?’” the archdiocese claimed in its statement. “When the Archbishop said ‘I’m not sure whether I knew it was a crime or not,’ he was simply referring to the fact that he did not know the year that clergy became mandatory reporters of suspected child abuse.”

The statement refers readers to page 108 of the deposition transcript – which clearly contradicts the archdiocese’s claim.

The accuser’s attorney did point out during the deposition that a 1973 law required mandatory reporting of sex abuse claims, but the archbishop’s attorney objected because the statement was not phrased as a question.

The plaintiff’s attorney then asked Carlson, who was ordained in 1970, whether he was aware throughout his career as a priest that it was a crime for adults to have sex with children.

The archbishop’s attorney objected to the form of that question, as well, because it did not address mandatory reporting laws, so the accuser’s attorney offered to ask another question.

“Archbishop, you knew it was a crime for an adult to engage in sex with a kid?” said attorney Jeff Anderson, who is representing the victim.

The archbishop said he was not sure at the time, but he was now aware that it was against the law.

The attorney then asks Carlson a series of questions to determine when the archbishop first became aware that priests could not legally have sex with children, but the church leader repeatedly claims he cannot remember.

On page 113 of the transcript, Carlson tells the plaintiff’s attorney that he recalled first reporting clergy sex abuse claims while serving as bishop in South Dakota.

The archbishop claims he can’t recall reporting any sex abuse allegations while serving in Minnesota, but he told the attorney he urged parents to report abuse themselves.

Carlson testified that he cannot recall advising priests or any other church officials to report sex abuse claims.

“I think I would have advised people that had firsthand information to call the police if they wanted to or to get the facts,” Carlson testified.

Anderson asked the archbishop, “yes or no” whether he remembers having done so, but the attorney did not ask about a legal obligation to report such claims.

“As I said, I don't remember whether I did or didn't,” Carlson said.