Stephen Colbert greets the return of the GOP 'Iraq Pack,' who were only ever wrong once 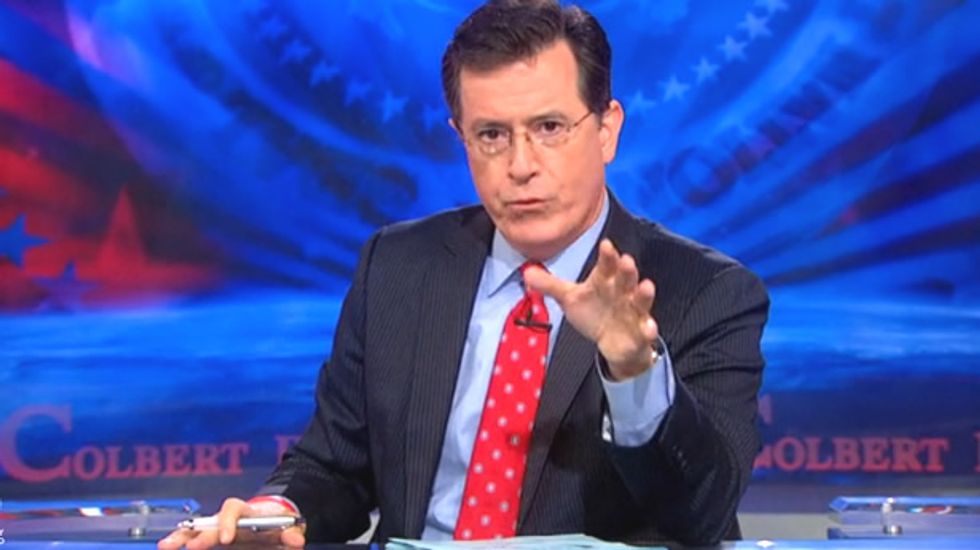 On Thursday's episode of The Colbert Report, Stephen Colbert discussed the return of the "Iraq Pack" in the wake of the uptick of sectarian violence in Iraq.

"I've told you about the recent surge of violence in Iraq," Colbert began, "and how it caught Obama with his Mom-jeans down. But as they say -- every brutal terrorist onslaught has a silver lining."

"In this case, it's brought back my old pals, 'The Iraq Pack,'" he said as an image of John Bolton, Dick Cheney, George W. Bush, John McCain, and Paul Wolfowitz dressed as members of "The Rat Pack" appeared beside him.

"And they are singing the ol' tunes," Colbert said before cutting to clips of Wolfowitz, Bolton, and McCain repeating, among other things, the initial justifications for invading Iraq in 2002.

Moreover, "John McCain is right -- we had that conflict won in 2009, when we left Iraq a peaceful, smoldering democracy. I believe we have some footage of Baghdad at the height of the surge," he said, then cut to this:

"For the most part," Colbert continued, "when we left the Sunni and Shite were 'bronies.'"

"But it's especially nice to see the return of the leader of the 'Iraq Pack,' 'Ol' Dead Eyes,'" he said, an image of Cheney beside him. "He crawled out from under his undisclosed rock to point an icy finger of truth at Barack Obama. In an op-ed in what many are calling The Wall Street Journal, Cheney writes, 'Rarely has a U.S. President been so wrong about so much at the expense of so many.'"

"Yes, rarely," Colbert said, "maybe only one other time."

"Of course, the liberal media went after him, especially left-wing loon Megyn Kelly," he said, before playing a clip of Kelly grilling Cheney on Fox News.

Watch the entire June 19, 2014 episode of The Colbert Report via Hulu below.