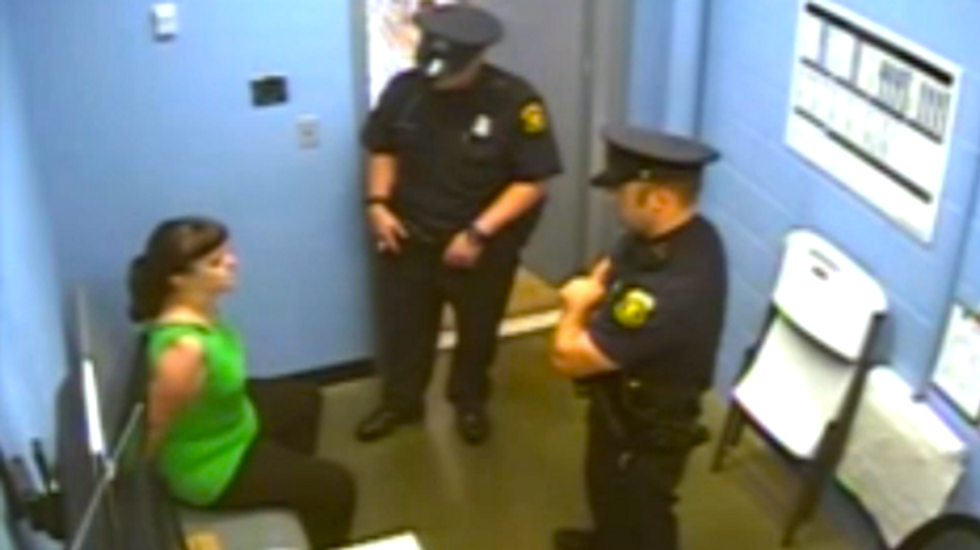 A Michigan couple has sued Walmart and police officers who detained their mentally disabled adult daughter over shoplifting allegations that turned out to be false.

Kozma said her daughter, who was born with a condition that deprived her brain of oxygen and has the mental capacity of an 8-year-old, went shopping Aug. 3, 2012, with her grandmother at the Livonia store.

A surveillance camera operator told the security guards she saw Jodi pick up hair ties and hide them in her purse and waistband.

She became upset and afraid when security guards stopped her, and the grandmother told them she was mentally challenged and would not intentionally steal.

The grandmother tried to show guards the receipt for hair ties Jodi had purchased, but they didn’t listen and refused to give her time to calm her granddaughter.

Jodi called her mother, who arrived at Walmart after police.

Officers said Jodi was “causing a scene” by screaming loudly and refused to place her hands behind her back so police could examine a bulge in her waistband.

So police placed her in handcuffs and stood her against a wall, where she began screaming again and reached for her grandmother.

Two officers “muscled Jody to the ground and handcuffed her behind her back,” police said in an incident report.

She was then taken to a private office for questioning and repeatedly denied stealing anything, and police threatened to conduct a body search.

Her mother arrived at that point and found Jodi handcuffed and catatonic, and Wendy Kozma persuaded them to allow her to search her daughter.

She lifted Jodi’s shirt and pant legs and opened her waistband, then emptied her purse.

No stolen goods were found, and police let Jodi go.

Both Walmart and Livonia police have denied wrongdoing in response to complaints filed by the Kozma’s shortly after the incident.

“In order to make the situation safe for all parties involved, the decision was made to handcuff your daughter, who was initially compliant, but then began to struggle,” said Lt. Francis Donnelly, of Livonia police, in a Sept. 18, 2012 letter to the family. “Officers used the minimal amount of force necessary to gain control and handcuff her. There was no indication that your daughter was injured when she was detained.”

“I have reviewed both video and audio recordings of the incident and find no evidence of unprofessional behavior or excessive force on the part of our officers,” Donnelly continued. “Based on my investigation, I have determined that your complaint against our officers is unfounded.”

The couple seeks an apology and unspecified damages, claiming four police officers used “a SWAT-like approach” during the shoplifting investigation.

Jodi wants an apology and a bouquet of flowers, because that’s how people show they're sorry in the movies.

Watch video from the incident posted online by the Detroit Free Press:

A top elections law expert has issued a strong warning that the 2024 presidential election may not be conducted fairly, and wants "millions" of Americans to take to the streets "for peaceful protests."

Rick Hasen, a Professor of Law and Political Science at the University of California, Irvine School of Law, in a 32-page draft paper, writes that because of many election workers and office holders, the 2020 election – despite Donald Trump's efforts – was carried out fairly, but America is facing a serious challenge and democracy could be the loser in 2024.