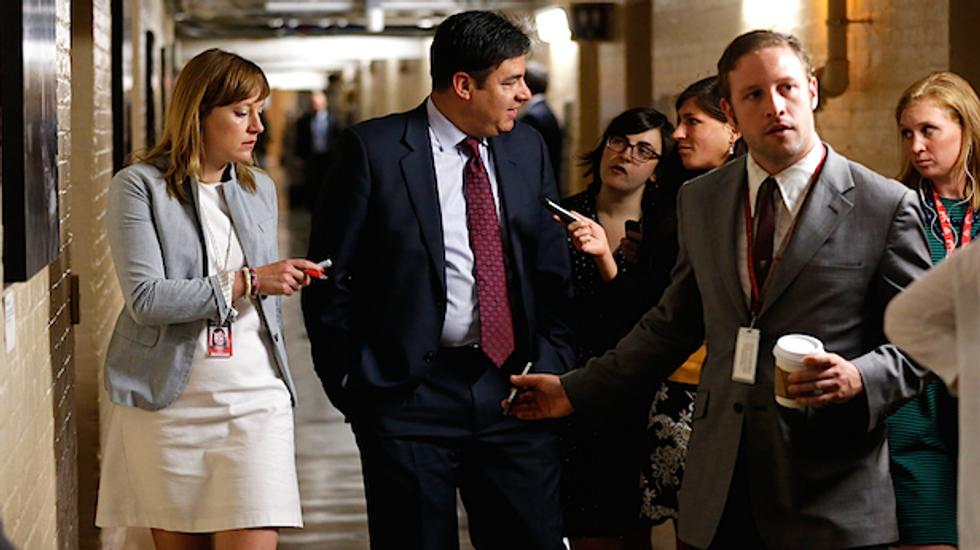 Conservative groups that often try to push U.S. Republican lawmakers toward more hardline policies are stepping cautiously ahead of the leadership election in the House of Representatives.

Organizations such as Heritage Action for America and Club for Growth have repeatedly urged House leadership to pursue their policy goals of smaller government and lower taxes, but have not taken a public stance on whom they would like to see in Republican House leadership.

Influencing a leadership election, typically done in private conversations between members in the halls of the Capitol, presents a rare challenge for outside groups whose strategies for influence in the past have been brazen and public.

The groups, which are influential with House conservatives, urged Republicans to resist compromise in last year's budget standoff that led to a government shutdown.

The actions of Heritage Action, Club for Growth and FreedomWorks prompted House Speaker John Boehner to publicly excoriate the groups for "pushing our members in places where they don't want to be" and prolonging the shutdown.

In contrast to their activism then, Heritage Action and Club for Growth are keeping a low profile.

The one group that has entered the fray, FreedomWorks, has endorsed Raul Labrador (pictured above, center) for majority leader and is urging Tea Party activists to follow by putting pressure on members ahead of the vote on Thursday.

No group has endorsed a candidate for whip, a position that is likely to open as McCarthy is predicted to win. Conservatives Steve Scalise and Marlin Stutzman have entered the whip race as has more moderate Peter Roskam.

The majority leader job is the second-ranking position in the House, after the speaker's role. The whip is the No. 3 job.

Policy analyst Steve Bell of the Bipartisan Policy Center said conservative groups will want to seize on that momentum by pressing for the election of more hardline candidates.

But Bell says these organizations can use private meetings and phone calls to press their views more quietly.

"So many people are ex-staffers or even ex-members that populate these groups," Bell said. "The question is whether it will be counterproductive or not."

Fearing backlash from House members for interfering, Heritage Action and Club for Growth have restricted their opinions to private forums.

Both Mike Needham of Heritage Action and Andy Roth of Club for Growth attended a dinner of conservative and Tea Party group leaders coincidentally held on the night of Cantor's loss.

"We were talking about the future of Republican leadership and what is needed," said Tony Perkins, president of the Family Research Council. "Republican-leaning voters do not see the Republican House pushing back and aggressively fighting this administration."