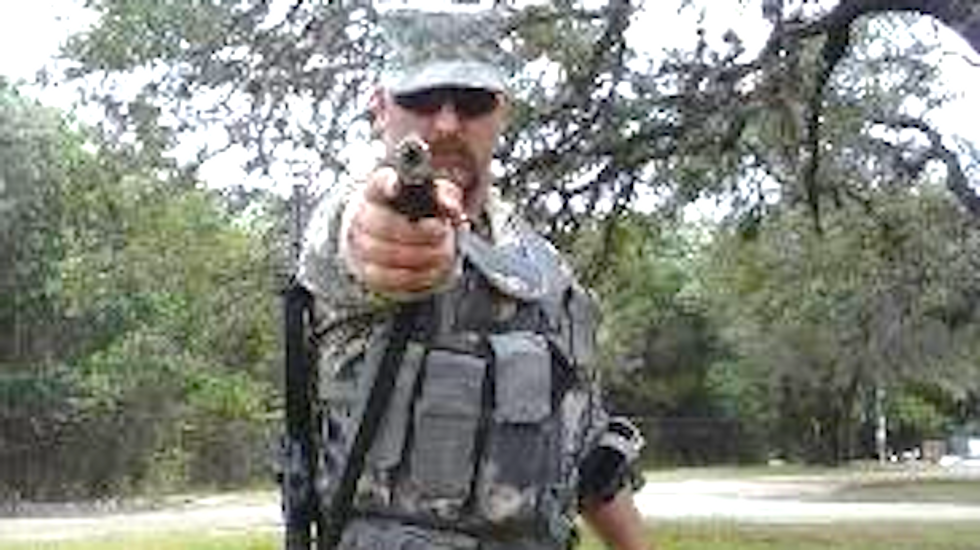 Efforts to secure the U.S.-Mexico border with armed militia groups appear to have fizzled as questions arise about their self-proclaimed “commander.”

Operation Secure Our Border, which was organized by “Commander” Chris “Threepercenter” Davis, claimed Tuesday on its website that there were three “troops on the ground” along the Arizona border and "four credible operations on the ground" on the Texas border, reported the San Antonio Express-News.

But the 37-year-old Davis has largely dropped out of view since his efforts were publicized, deactivating his YouTube account and Facebook page and canceling interviews with Fox News and Truth Broadcasting Network.

"The commander has gone black because of security threats," said Barbie Rogers, founder of the Patriots Information Hotline helping the group organize.

Harry Link, host of the conspiratorial Truth Broadcasting Network’s “Death to the New World Order” program, was furious at Davis’ last-minute cancellation, accusing the militia leader of engaging in a “psyops” campaign to trick true patriots – such as himself.

“Have you seen a single photograph of the militias on the borders? Because I have not,” Link said.

One of the originators of the pro-gun, anti-government “Three Percenter” movement also dismissed Davis as a fraud.

“Based on what I know now, stay as far away from this incipient exercise in cluster coitus as you can,” said anti-government activist Mike Vanderboegh on his blog.

Vanderboegh objected to widely reported comments Davis made in a since-deleted YouTube video urging militia members to point guns at suspected illegal immigrants and tell them to “get back across the border or you will be shot,” saying such statements were unhelpful to the “Patriot” cause.

“What is accomplished by a picket line of armed volunteers threatening to shoot unarmed, half-starved and thirsty children?” Vanderboegh said. “I agree that the invasion is devilish in its conception, carried out by collectivists who could give a shit less about how many kids die along the way, but will the proposed COA do ANYTHING about it other than to help make the other side's propaganda points?”

Davis describes himself as a truck driver and former Army specialist – and he was, until he was stripped of his E-4 rank and demoted to private after he was discharged from the Army in 2001.

The militia leader had posted his private military record in response to naysayers who questioned his credentials, but he neglected to remove portions that showed he had been discharged "under other than honorable conditions in lieu of trial by court martial."

Davis has since removed the document, which was preserved as a screen capture and viewed by The Raw Story.

Soldiers may be discharged in lieu of trial by court martial when they use force or violence to produce serious bodily injury or death, abuse a position of trust, are insubordinate, deliberately endanger the health of others or display behavior that departs significantly from conducted expected by the Army.

It wasn’t specified what actions led to Davis’ discharge.

The News-Express reported that Davis did not appear to have an arrest record, but he was cited last year with two other men as part of an Open Carry Texas demonstration outside a San Antonio Starbucks.

The incident triggered an open carry rally at the Alamo that drew hundreds of armed protesters.

The U.S. Customs and Border Protection issued a statement opposing militia action along the border, saying the groups "could have disastrous personal and public safety consequences."

But one of Davis’ allies insisted the militia groups would work to assist law enforcement, although Davis himself urged them to “start the next 1776 right there on the border” if they were confronted by law enforcement authorities.

“This isn’t a 'go in guns blazing' operation,” said Rick Light, who leads a militia group in Rocksprings, Texas. “It’s pretty simple — it’s just eyes and ears, more people along the border who can give a report and if we see a problem, we’re going to call it in.”

He claimed to have more than 100 volunteers mobilized to secure the border, but the response so far has been far fewer.

Watch the entire episode of "Death to the New World Order" posted online by Hatewatch: