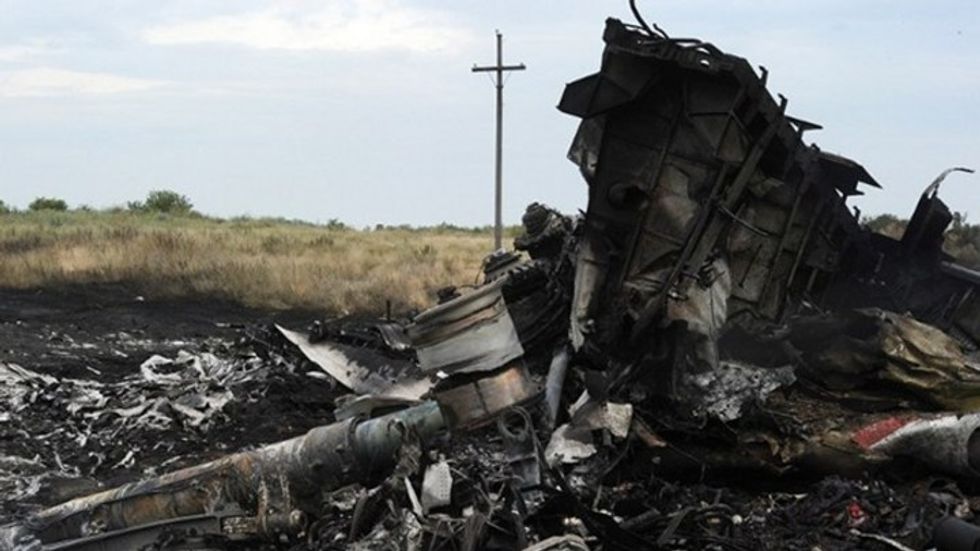 Ukraine's government on Saturday accused pro-Russian rebels in eastern Ukraine of removing bodies and trying to destroy evidence at the site where Malaysia Airlines flight MH17 crashed after being brought down by a suspected surface-to-air missile.

Kiev said in a statement that it had evidence 38 bodies had been taken to the morgue in Donetsk and that specialists with "strong Russian accents" said they would carry out autopsies. "The government of Ukraine officially states that the terrorists, with the help of Russia, are trying to destroy evidence of international crimes," the statement said.

The security of the crash site, outside the village of Grabovo in eastern Ukraine, is crucial to preserving evidence that will determine who and what brought the airliner down, but talks between Kiev and rebels who are in control of it have so far failed to establish a buffer zone where international investigators can work, or to give them access.

The head of Ukraine's security service, Valentyn Nalyvaychenko, said in televised remarks on Saturday that talks had agreed a 20km security zone around the site "so that Ukraine could fulfil the most important thing – identify the bodies hand them over to relatives". A senior official of the self-styled Donetsk People's Republic, however, said no agreement had been reached.

A spokesman for the Organisation for Security and Cooperation in Europe (OSCE), Michael Bociurkiw, also said he was not aware of any agreement, and reports from the scene said there was no security zone.

A team of nearly 30 OSCE observers attempted for second time to gain access to the crash site on Saturday after meeting resistance from armed rebels on Friday. The monitors were allowed to view one part of the site under escort.

Aleksander Borodai, prime minister of the self-styled Donetsk People's Republic, denied rebels had touched the crash site but said it would move the bodies for "humanitarian" reasons and called on Russia to help. "Bodies of innocent people are lying out in the heat. We reserve the right, if the delay continues ... to begin the process of taking away the bodies. We ask the Russian Federation to help us with this problem and send their experts," he said.

Workers at the scene have recovered more than 180 bodies, which have begun to decompose under the summer sun. All 298 on board the plane were killed in the crash.

Malaysia's transport minister, Liow Tiong Lai, called on the UN on Saturday to assist with a ceasefire in eastern Ukraine and ensure that investigators have safe access to the crash site so they can remove bodies as quickly as possible. Anything less would be inhumane, he said.

Investigators from the Netherlands, home to 192 of the victims, arrived in Kiev overnight. A team from Malaysia, home to 44, is also in Ukraine. The Malaysian transport minster is to join the team and attempt to gain access to the site.

Six investigators from the UK Air Accidents Investigation Branch are also to join the growing international investigation. The UK Foreign Office has sent extra consular staff to Ukraine and the Metropolitan police are liaising with international partners to send specialist officers to assist with the recovery, identification and repatriation of those killed. The dead include 10 British nationals.

There is growing international condemnation of pro-Russian separatists over the incident, with Washington pointing the finger of blame at the militias. The Pentagon confirmed a surface-to-air missile fired from territory controlled by separatists brought down the plane, but stopped short of accusing Russia of supplying the weapon.

In the UK, Downing Street said it appeared increasingly likely that the catastrophe was the result of a surface-to-air missile fired from near rebel-held Torez.

The Australian prime minster, Tony Abbott, repeated his assertion on Saturday that all evidence suggests that the missile came from an area controlled by Russian-backed separatists, using equipment likely supplied by Russia.

At a charged UN security council meeting on Friday the US ambassador, Samantha Power, said the US "cannot rule out technical assistance from Russia" while the Russian ambassador, Vitaly Churkin, said Moscow "places all blame on Kiev".

Barack Obama on Friday said the circumstances of the crash, which came at the end of a week in which pro-Russian separatists claimed to have shot down Ukrainian military aircraft, suggested some Russian assistance to the rebel forces.

"We don't yet know exactly what happened with respect to Malaysia Airlines, although obviously we are beginning to draw some conclusions given the nature of the shot that was fired. There are only certain types of anti-aircraft missiles that can reach up 30,000ft and shoot down a passenger jet.

"Set aside what's happened with respect to the Malaysian airliner, a group of separatists cannot shoot down military transport planes or, they claim, shoot down fighter jets without sophisticated equipment and sophisticated training and that's coming from Russia."

The Chinese president, Xi Jinping, who has avoided discussing the issue of responsibility, said on Saturday that he hoped "a fair and objective probe will be carried out to establish the truth as early as possible".