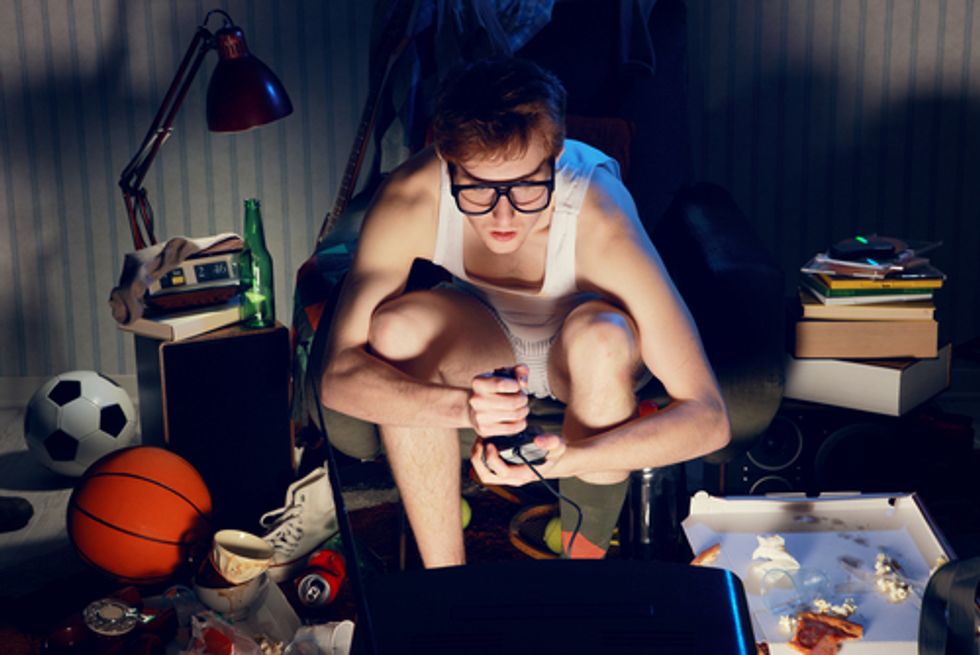 Despite my annoyance at the way that #GamerGate has successfully bamboozled some journalists to claim, without a shred of evidence, that some or even most(hahahahahaha) people involved in #GamerGate mean well, by and large, most media attention on #GamerGate has correctly focused on the movement's main purpose---drilling women who criticize sexism out of gaming---and has only included the "well-meaning people" thing as an ass-covering gambit, just in case such a thing does ever pop up, even though there is no real evidence of such an animal existing within #GamerGate. (One of the examples being heralded by #GamerGaters of a "good" guy who is supposedly "against" bullying turns out to be a major bully who writes tweets that cross the line from mere rape apology to promoting sexual abuse.) The reason for this, as Jesse Singal notes, is that they are so quick to lie and dissemble that the only coherent theme that you can even get out of it all is the very steady and obvious hatred of women. Heaven help us if they ever figure out how to lie coherently, which could very well lead to bullying journalists into trying to report "both sides" of the story, the true side and the lie side. But until then, the coverage has been more or less accurate in covering the movement as a misogynist one.

Because no one is really fooled and we all understand that #GamerGate is a misogynist harassment campaign, it's reasonable to believe that the gaming companies might want to put some sunshine between themselves and #GamerGate. And yet, as the New York Times discovered, that isn't really happening:

“Threats of violence and harassment are wrong,” the Entertainment Software Association, the main lobbying group for big game companies, said in a statement. “They have to stop. There is no place in the video game community — or our society — for personal attacks and threats.”

So a refusal to comment and what comment we do get is generic enough that it's worthless. After all, #GamerGaters all claim now to be anti-harassment, in the same way that racist hate groups claim to oppose racism and MRAs claim not to be misogynists. It costs you nothing to lie like this and it forces your opponents to have to spend time proving that you're lying instead of arguing with you openly about the beliefs you disavow having while you act on them.

Well, I hate to say it, but that's all you're going to get from industry. And it's not just because they're cowards. It's because the big gaming companies have interests that align with #GamerGate and so yeah, they aren't going to do anything to stop it.

The first and most obvious way that the industry benefits from #GamerGate is because they are the primary beneficiaries of #GamerGate's war on ethical journalism. (A good rule of thumb is whatever #GamerGaters defensively claim to be for, they are against. This is typical to reactionary movements.) As I wrote last week, the overwhelming evidence shows that #GamerGate is ready and willing to stomp out original research, in-depth journalism, independent reviews, reporting on games that don't have huge marketing budgets or any of the behaviors we associate with responsible, ethical industry journalism. As the editor of Polygon wrote:

But under that same hashtag, we're met with accusations of corruption because ... our review of Bayonetta 2 had the audacity to treat it like a cultural artifact and not simply a toy. The solution: Convince Nintendo to blacklist us for our impudence. Under that same hashtag, we're met with coordinated campaigns to strip us of our advertising, pointing to criticism of advertisers like Intel. The same SPJ Code of Ethics states, "Deny favored treatment to advertisers, donors or any other special interests, and resist internal and external pressure to influence coverage." To rectify these so-called ethical breaches would be in direct violation of widely accepted journalistic standards, like criticism free from corporate oversight and the freedom to critique one's own advertisers.

It's weird but it's true: #GamerGate is a grassroots movement that is trying to abolish  ethical journalism and to encourage corporations to expand their already troubling attempts to control what gaming journalists are writing about. #GamerGate clearly would prefer that websites like Kotaku and Polygon simply run marketing press releases from corporate gamers and leave it at that.

A grassroots movement discouraging---even terrorizing---journalists for daring to write independent stuff instead of merely kiss gaming company asses? That's a marketer's dream! But there's even more reason, beyond simple cowardice, for the big gaming companies to respond with "no comment" to all this. Let's face it: The marketing departments of gaming companies don't want games to be inclusive to women.

At Ophelia Benson's blog, she ran a post by Lee Brimmicombe-Wood about the way that marketing departments fight developers who want to make games more inclusive:

I recall an incident on a famous AAA franchise I worked on. The four-player co-op mode was to have four characters, and we pitched an equal gender balance and diverse racial makeup. We even addressed age, making one of the women an older, Helen Mirren type. Marketing nixed this. They hated the scheme with a passion and, so far as I could see, plotted to squash it.

How they did so was very interesting. They set up focus groups in the American midwest primarily made up of young males. And they structured the presentation to give them the answers they desired. The dudebros delivered, and some of our women designers, watching from behind one-way glass, were horrified to listen in to some sexist chat by the participants, commenting on the fuckability of the characters.

So, Marketing got what they wanted: of the four characters there were three white guys, their one concession to diversity being the black woman. There was no arguing with Marketing. They had the metrics from Left 4 Dead to prove whatever the hell they wanted with regards to player selection of women characters to play.

Brimmicombe-Wood said he hopes marketing realizes more women are playing games and "tapping that audience will lead to $$$$$." On its surface, this seems like common sense: Make gaming more welcoming to women and double your audience, right? But that oversimplifies the issue. I suspect marketers in gaming react this way because they believe, perhaps with good reason, that you cannot let women in without running their hardcore gaming audience---the one that spends the most money---off.

The concept of exclusivity is an important one in the world of marketing. The idea is that people buy your product specifically because they believe that it signifies that they are superior people, and the way to keep that image is to purposefully exclude people that are seen as devaluing the product. That's why so many clothing store companies refuse to stock plus-size clothes, because they're afraid that thin status seekers---the kind of women who spend a lot of money on clothes---with stop shopping at their stores if they get the reputation as a "fat" brand. (You can see this logic taken to the next level with a clothing store that only sells sizes 0-2.)

The belief that men will bolt the second a brand is seen as "feminine" is a long-standing concept in marketing. That's why we get "man" versions of products that shouldn't have any gender. Womanness is seen by many men, particularly young and single men, as a polluting agent and something to be avoided at all costs.

With gaming, that sense that it's only worth doing if the women stay out of it---or if they must be in it, they should be silent and invisible---is amplified. If one thing #GamerGate has made clear, it's that a lot of angry young men see games as a male-only space where they can claim a sense of masculine dominance they feel the rest of the world has unfairly taken from them. These guys may not to be the majority of gamers, but they are probably the ones who spend the most money, because games are more than a way to waste time for them, but are the way they define themselves as men. And to include women into their world is seen as emasculating. That's why they get so angry when the see a Zoe Quinn or Anita Sarkeesian get attention. Games are supposed to be their world, dammit! How dare some woman ruin everything by getting the attention and praise that they aren't getting? Women are ruining everything!

Game marketing has been aggressively aimed at this aggressively sexist young men for a long time now, which is something Sarkeesian's videos make abundantly clear. Sexism is a selling point for them. Marketers fear that if they reach out to women and tone down the sexism, then the hardcore gamers that make them a lot of money right now will revolt and stop spending so much money. And there's no guarantee that women will replace the money lost. While just as many women play games as men, it's objectively true that women have a lot less free time and spending money than men do. Say what you will about the sexist dudebro: Keep flattering his bullshit sense of male superiority and you have a customer for life. Even when he's grown, he'll be playing shoot-'em-ups while his wife runs around cleaning up after him and the kids. If there was a way to get women as customers without losing the dudebros, they'd take it, of course. But they feel they do have to choose. And they're going to choose sexist men, who have more money and free time, than women who frequently have other priorities (including picking up work men slack off on).

So yeah, as much as I'd like to see big gaming companies denounce #GamerGate, I'm not holding my breath. #GamerGate promotes the status quo, and the status quo is making them a lot of money. Maybe they're wrong and being more inclusive would not run off as many men as they think and would create whole new, profitable fan bases. But why take that chance when you're already making a killing by flattering the sensibilities of misogynist dudebros?