#GamerGate is an attack on ethical journalism 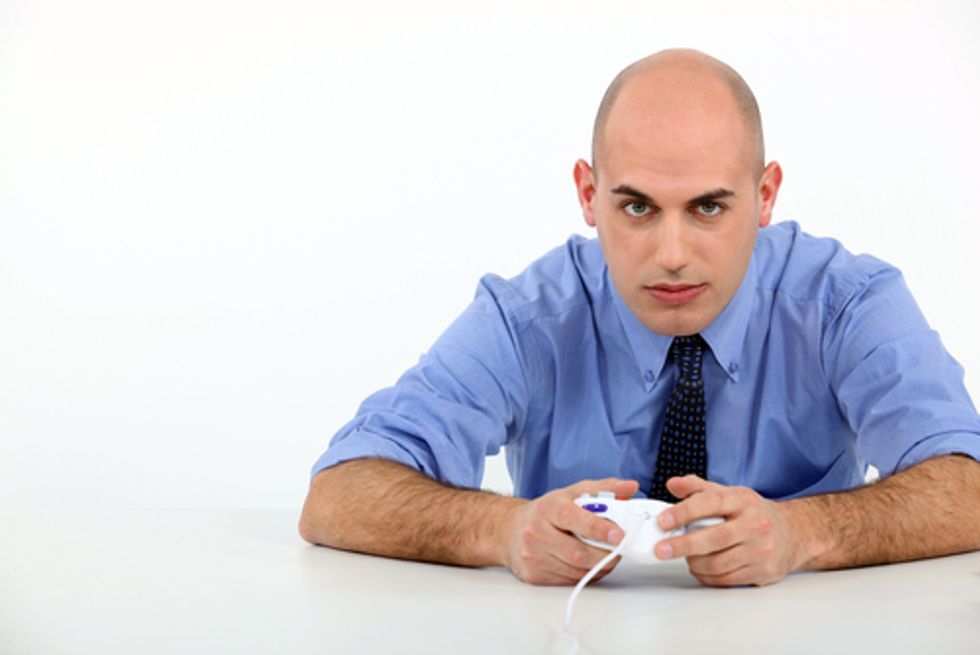 In the ongoing, head-scratching pseudo-scandal that is #GamerGate, there is a narrative that is starting to take hold that is really beginning to bug me. That narrative, which is a classic example of someone assuming that the "middle ground" is always the most reasonable, goes something like this: "Yes, #GamerGate is a deplorable and misogynist harassment campaign, but there's some poor, well-meaning fools that really did get involved because they have concerns about ethics in journalism."

"Let’s be clear: pro-GamerGate people, those who are trying to serve as media watchdogs, are not all horrendous misogynists. Some of them are even female." (Note from Amanda: Being a woman does not mean you can't be a misogynist.)

"The #GamerGaters have some actually interesting concerns, largely driven by the changing face of video game culture. But those concerns have often been warped and drowned out by an army of trolls spewing bile, often at women."

"I absolutely believe that there are many who have been part of the million tweets made using this tag who are horrified by the horrendous abuse and criminal attacks that have come from within GG. I know that there are those who identify with GG who have benign aims, and are personally hurt or upset when they see people identifying GG as a misogynist cause, or a cruel, bullying agenda."

I realize this post is a nit-pick, absolutely. I know that all three of those pieces I linked above are condemnations of #GamerGate and attempted exposes of how misogynist and rotten it really is. The "I know you mean well" thing is probably not sincere, really, but a rhetorical gambit to try to get some #GamerGaters, who are young and maybe can be talked off the ledge, into listening to reason. But I do think it's all wrong, and that it's generally ill-advised and dangerous to give bigots the benefit of the doubt when they have not earned it.

Here is the list of reasons #GamerGate should be understood primarily as a misogyny-fueled attack on ethics in journalism. I've made versions of this list before, but it keeps growing and is good to keep in mind.

1) The main target of #GamerGate is not a journalist. She's a video game developer. Holding her accountable for "ethics in journalism" is like telling your accountant that it's his job to negotiate peace treaties in the Middle East. While the attacks on Zoe Quinn aren't, like the rest of this list, attacks on ethical journalism itself, the fact that this all started off with a non sequitur shows that, on the long list of shit #GamerGate cares about, integrity in journalism doesn't even rate.

2) The second biggest target of #GamerGate is an exemplar of clean journalism. If what you don't like about gaming journalism is that it's too cozy with the industry and therefore the writers are afraid to be critical, then your fucking hero should be Anita Sarkeesian. She funded herself with Kickstarter and not industry money. She is harshly critical of video games, even as she is a fan. She is the ideal of what a critical gaming journalist should be: Knowledgeable, critical, fair, thorough and utterly non-corrupt.

3) The biggest victory to date of #GamerGate has been an attack on ethical journalism. One of the most important ideas when it comes to ethical journalism is that there's a wall between advertising and editorial. Publications are not supposed to let the demands of advertisers dictate content. #GamerGaters hate this rule of ethics, because, as opponents of ethical journalism, they wish to control what journalists say and censor any ideas or opinions that they don't want to hear, no matter how well-evidenced or well-argued they are. And so they have been targeting advertisers, trying to get them to pull ads from gaming websites that publish ideas they wish to censor.

So far, they've had one major success, convincing Intel to pull advertising from Gamasutra because Gamasutra published a piece by a young woman (are you beginning to detect a theme in who gets targeted by #GamerGate?) that argued that games can and should have a broader appeal than angry young woman-hating dudes. Gamasutra is standing by their writer and by the principle of ethical journalism, but it's clear that what #GamerGate is trying to do is end ethical journalism by scaring websites and making them afraid they will lose all funding if they participate in clean, unbiased reporting and writing.

4) In yet another attack on free discourse and ethical journalism, #GamerGate tried to shut down a legitimate research project. Social researcher Jennifer Allaway does research on the intersection of gender, race and video gaming. She has a new study she's working on about diverse representation in game content and she put feelers out for help on data collection on how gamers felt about it. #GamerGaters found out and tried to shut down her research by overwhelming the data collection with unusable garbage.

And by garbage, I mean garbage. They filled out her survey with answers like "suck my dick" that have to be thrown out of the pile. It wasn't that they were giving her answers she disagreed with at all. Like Allaway said, "Had #Gamergate participated in my survey honestly, as a researcher, I would gladly have taken their data. After all, I recognize that they play games, and to exclude their data purely on the grounds of our moral disagreement would be unethical. They would have added a layer of diverse opinions to the data set. I would have valued those opinions. The relationship to data, and ultimately my participants, for me, is sacred."

But instead of sharing their opinions with her, they tried to shut her down instead. This is because, once again, #GamerGate is opposed to ethical journalism.  The #GamerGaters realize that studies produce data, and data is something ethical journalists love. Being able to report on research studies means getting past just reporting on industry press releases or reviewing games and would allow gaming journalists to talk about real issues, in depth. And #GamerGate, being a movement in opposition to ethical journalism, wants to cut that opportunity off at the pass.

5) The most recent target of #GamerGate was selected because she engages in ethical journalism. If Brianna Wu had kept her mouth shut and just quietly developed video games, she probably would have been left alone. Instead, she dipped her toe into the art of writing ethical journalistic pieces, such as this piece where she carefully chronicled the seriousness of harassment against women in the video game industry. She also made fun of #GamerGaters on Twitter.

Looking it over, I guess one could say there are some people who are sincerely concerned about ethics in gaming journalism who have gotten into #GamerGate. That's because they are seriously concerned that there are any ethics at all in journalism and they are on a warpath to bring an end to ethics in journalism. Or, at least, as long as women practice ethical journalism that is. If they run all the women out, they might let some ethical journalists who are men stay, to be fair. But overall, the pattern is clear: #GamerGate opposes ethical journalism. They just claim the opposite, for the same reason conservatives say liberals are the "real" racists and anti-choicers claim they want to "protect" women and homophobes say they are trying to "protect traditional marriage". Bigots always try to claim they are not bigots and are actually the ones fighting bigotry. Don't get snookered by the lies.

Updated: Thanks Daniel Martin in comments for flagging this Deadspin piece making similar points. This was particularly noteworthy:

The demands for journalistic integrity coming from Gamergate have nothing at all to do with the systemic corruption of the gaming media. They've centered instead on journalists purportedly pursuing social-justice agendas and on ridiculous claims that the press sees gamers as vectors of social contagion. Some of the complaints, like the idea that outlets ought to reconsider their editorial positions if enough readers disagree with them, even stand in direct opposition to traditional journalistic ethics.

All of this makes sense, though, if you think about Gamergate as a mutant variant of the traditional American grievance movement, a rearguard action marching under the banner of high-minded media critique. The claims from what we like to call the "bias journalisms" school of media criticism aren't meant to express anything in particular, or even, perhaps, to be taken seriously; they're meant to work the referees, to get them looking over their shoulders, to soften them up in the hopes that a particular grievance, whatever its merits, might get a better hearing next time around. The problem, in other words, isn't that journalists have agendas; it's that some of them have the wrong agendas.

In other words, #GamerGate is about "ethics in journalism" in the same way Fox News is "fair and balanced", which is to say "not in the slightest and, in fact, they are the opposite". Fox News called itself "fair and balanced" to cover for a not-exactly-discreet intention to be unfair, unbalanced and frequently just straight up misleading. And so #GamerGate claims to be about ethics in journalism, when in fact it is about the opposite: Bullying gaming journalists until they get in line with a corporate-friendly agenda of uncritically marketing "games pitched at the intellectual and emotional level of a 16-year-old suburban masturbator". Anyone who actually tries to talk about anything interesting or intellectually engaging, particularly if female, will be drilled out with harassment.