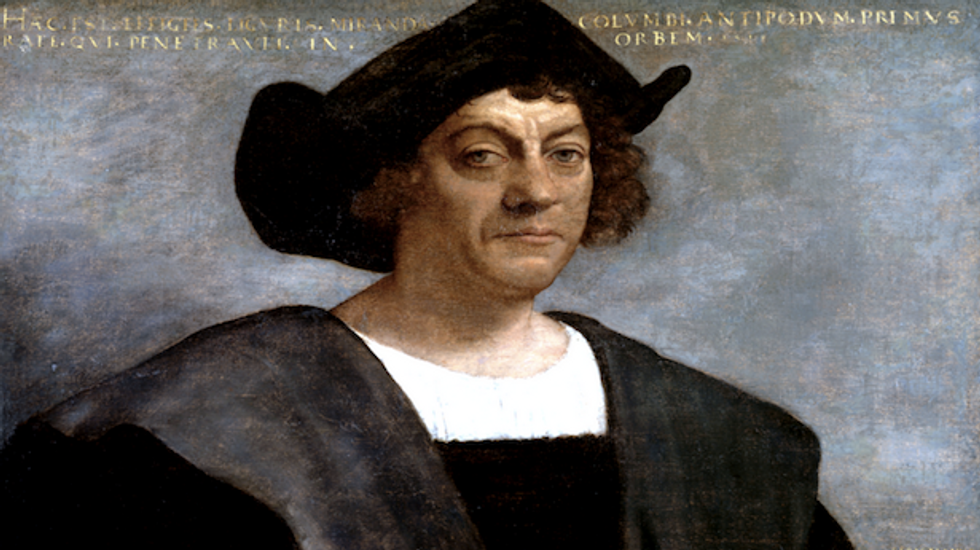 See also: This is what Columbus Day would look like if you included an actual Native American

Happy Columbus Day! I hope you're celebrating the holiday appropriately, by breaking into someone's home and claiming that you discovered and now own it! Or you could just, you know, mourn the genocide of indigenous people by shopping. Because we all grieve in different ways.

You've probably heard lots of great things about Christopher Columbus and tons of inspiring quotes from him about hard work, god, the sea etc. But those don't really capture what Columbus and the colonial expansion of which he was part were all about. So, without further ado, allow me to present these quotes that you may not have heard, from or about Christopher Columbus.

1. Conquest: the perfect chaser for expelling Muslims and Jews. You don't have to be an academic to link Spain's colonial expansion abroad with its inquisition at home. Columbus made the connection himself. Of course he saw this as a good thing, not a bad one-- a killer combo, if you will. He wrote to King Ferdinand and Queen Isabella of Spain

YOUR HIGHNESSES, as Catholic Christians and Princes who love the holy Christian faith, and the propagation of it, and who are enemies to the sect of Mahoma [Islam] and to all idolatries and heresies, resolved to send me, Cristóbal Colon, to the said parts of India to see the said princes ... with a view that they might be converted to our holy faith .... Thus, after having turned out all the Jews from all your kingdoms and lordships ... your Highnesses gave orders to me that with a sufficient fleet I should go to the said parts of India .... I shall forget sleep, and shall work at the business of navigation, so that the service is performed.

2. These Natives are so nice, we'd be crazy not to enslave them! This excerpt from Columbus' diary describes the Arawak people who greeted him and his men:

They ... brought us parrots and balls of cotton and spears and many other things, which they exchanged for the glass beads and hawks' bells. They willingly traded everything they owned... . They were well-built, with good bodies and handsome features.... They do not bear arms, and do not know them, for I showed them a sword, they took it by the edge and cut themselves out of ignorance. They have no iron. Their spears are made of cane... . They would make fine servants.... With fifty men we could subjugate them all and make them do whatever we want.

3. I was right about how easy that whole subjugation thing would be! In another letter to King Ferdinand, Columbus wrote

As soon as I arrived in the Indies, in the first island which I found, I took some of the natives by force, in order that they might learn and might give me information of whatever there is in these parts. And so it was that they soon understood us, and we them, either by speech or by signs, and they have been very serviceable.

4. Rape! Columbus was such a mensch, he would let his men do whatever they wanted with the natives they captured. One of his men and a childhood friend of Columbus, Michele da Cuneo, describes in a letter how he raped a native woman:

While I was in the boat, I captured a very beautiful Carib woman, whom the said Lord Admiral gave to me. When I had taken her to my cabin she was naked—as was their custom. I was filled with a desire to take my pleasure with her and attempted to satisfy my desire. She was unwilling, and so treated me with her nails that I wished I had never begun. But—to cut a long story short—I then took a piece of rope and whipped her soundly, and she let forth such incredible screams that you would not have believed your ears. Eventually we came to such terms, I assure you, that you would have thought that she had been brought up in a school for whores.

5. Not so Christian. But the anecdote captured above was not some isolated incident of cruelty. Ironically, but in no way surprisingly, the Spanish who came to save the "heathens" from their idolatry, weren't very Christ-like in their behavior. In his book The Devastation of the Indies. Bartolome de las Casas, the priest who accompanied Columbus on his conquest of Cuba, detailed the abuse and murder of the native population:

Endless testimonies . .. prove the mild and pacific temperament of the natives.... But our work was to exasperate, ravage, kill, mangle and destroy...

And the Christians, with their horses and swords and pikes began to carry out massacres and strange cruelties against them. They attacked the towns and spared neither the children nor the aged nor pregnant women nor women in childbed, not only stabbing them and dismembering them but cutting them to pieces as if dealing with sheep in the slaughter house. They laid bets as to who, with one stroke of the sword, could split a man in two or could cut off his head or spill out his entrails with a single stroke of the pike. They took infants from their mothers' breasts, snatching them by the legs and pitching them head first against the crags or snatched them by the arms and threw them into the rivers, roaring with laughter and saying as the babies fell into the water, "Boil there, you offspring of the devil!" Other infants they put to the sword along with their mothers and anyone else who happened to be nearby. They made some low wide gallows on which the hanged victim's feet almost touched the ground, stringing up their victims in lots of thirteen, in memory of Our Redeemer and His twelve Apostles, then set burning wood at their feet and thus burned them alive. To others they attached straw or wrapped their whole bodies in straw and set them afire. With still others, all those they wanted to capture alive, they cut off their hands and hung them round the victim's neck, saying, "Go now, carry the message," meaning, Take the news to the Indians who have fled to the mountains. They usually dealt with the chieftains and nobles in the following way: they made a grid of rods which they placed on forked sticks, then lashed the victims to the grid and lighted a smoldering fire underneath, so that little by little, as those captives screamed in despair and torment, their souls would leave them....

So, happy Columbus Day! Or, actually, let's follow the cities and states who have stopped celebrating Columbus Day and celebrate, instead, "Indigenous People's Day."

An Ohio Republican is being called out for hypocrisy for his legislation to outlaw distracted driving after attending a committee hearing while driving.

Gizmodo cited local newspaper, the Columbus Dispatch, for reporting state Sen. Andrew Brenner's (R) hilarious failure, still available on video from the Ohio Channel. He began sitting in his car with a background photo of his living room. Once Brenner put on his seatbelt and began driving, however, the cover was blown.

The pro-Trump news outlet Newsmax surged in visibility during Donald Trump's presidency, and its CEO, Chris Ruddy, cultivated his brand as a "Trump insider" throughout it all and wanted to frame the outlet as a bulwark against the mainstream media narrative on the former president. But now, his efforts have have landed him in legal jeopardy, The Washington Post reports.

"Far more so than Fox, Newsmax promoted Trump's lie of a stolen election, and carried on with that message through and beyond Jan. 6, when a violent mob stormed the Capitol," the Post's Sarah Ellison, Jonathan O'Connell and Josh Dawsey write, alluding to the storm of defamation lawsuits voting tech companies have unleashed against pro-Trump outlets and figures who perpetuated conspiracy theories about mass voter fraud.