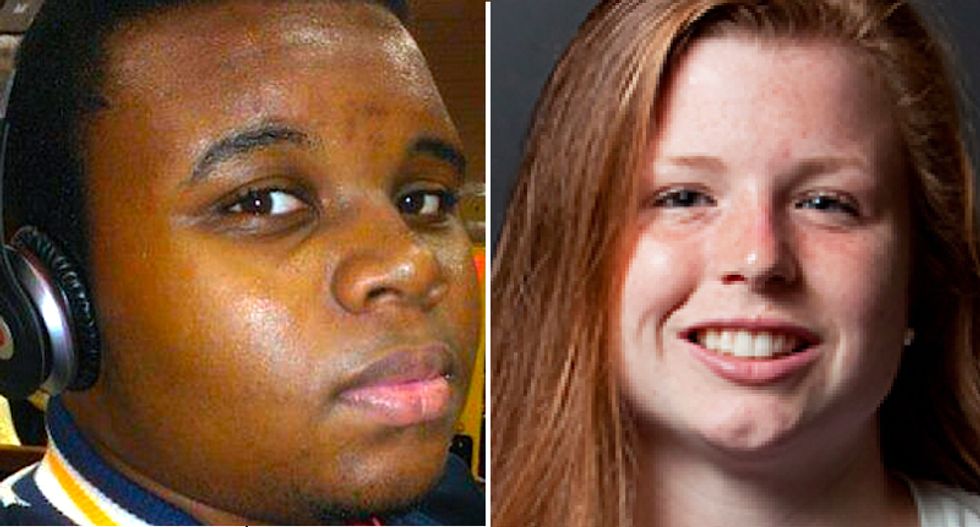 On August 9, 2014, in Ferguson, Missouri, 18-year-old unarmed African-American Michael Brown was shot and killed by officer Darren Wilson after an altercation with Wilson as he sat in his police cruiser. Witness accounts vary, but what is known is that  before encountering Wilson, Brown reportedly stole some cigarillos from a local store, As Brown and a friend walked down the middle of the street towards home, they were told to get on the sidewalk by Wilson which eventually led to a scuffle in which Brown was shot once by Wilson, Brown then began quickly walking away. Wilson left his cruiser and fired his weapon eleven more times, hitting Brown who had turned towards the officer, five more times and killing him.

Some witnesses report that the unarmed Brown has his hands up in surrender as officer Wilson shot him.

Less than one month later, 19-year-old Sarah Culhane of  Princeton, New Jersey crashed her blue BMW into another car in Bensalem, Pa.  When police attempted to pull her over she took off and police eventually abandoned following her in a high speed chase on the city streets.  Culhane later hit another car with her BMW -- injuring a woman -- before fleeing once again only to hit a third car. Culhane then abandoned her car and fled on foot, before being arrested by police. As police took her into custody, the Amherst College student and field hockey athlete resisted arrest, kicking one police officer in the head before being subdued.

Culhane was charged with aggravated assault, accidents involving injury, resisting arrest, red light violation, driving at unsafe speed, and reckless driving. A judge felt her charges were serious enough that he set her bail at $750,000.

On Nov. 24, a grand jury in St. Louis County declined to charge officer Darren Wilson with any crimes after shooting the unarmed Michael Brown whom he claimed attacked him.  St Louis prosecutor Bob McCulloch later admitted that he allowed perjured testimony during the grand jury proceedings by people who claimed to be witnesses but were not at the scene of the shooting.

Darren Wilson resigned from the Ferguson police department and today it was announced that the Justice Department is about to clear the white police officer who killed the black unarmed teen.

According to the Bucks County Courier-Times, the prosecutor overseeing  the case of 19-year-old Sara Culhane -- who crashed her BMW into three cars, injured a woman in the process, and assaulted a police officer while resisting arrest -- is  dropping most charges against the young woman. Culhane will see two felony charges of aggravated assault and attempting to elude police, along with misdemeanor resisting arrest and traffic violations dropped to to a single misdemeanor charge of a crime involving personal injury.

According to NJ. com, as a first time offender Culhane will be eligible for a first-time offender program in Pennsylvania, allowing her to avoid jail time, with the promise of a clean record after completing a rehabilitation program and public service.