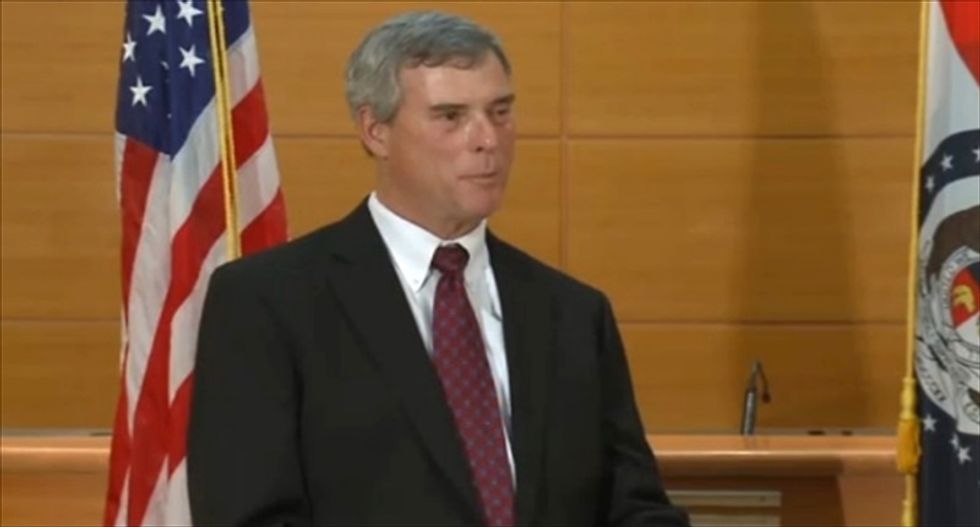 St. Louis County Prosecutor Bob McCulloch said on Friday that he let witnesses who were lying testify before the grand jury that chose not to indict a Ferguson, Missouri police officer for shooting and killing 18-year-old Michael Brown, Buzzfeed reported.

"There were people who came in and, yes, absolutely lied under oath," McCulloch told KTRS-AM host McGraw Milhaven. "Some lied to the FBI. Even though they're not under oath, that's another potential offense — a federal offense. I thought it was much more important to present the entire picture."

McCulloch explained that he decided to let "anyone who claimed to have witnessed anything" testify before the jurors, out of the belief that he would be criticized no matter how he approached the possible prosecution of Officer Darren Wilson, who Brown following a confrontation this past August.

He also admitted that the testimony of "Witness 40," identified in a grand jury transcript as 45-year-old Sandra McElroy, lacked credibility.

"This lady clearly wasn't present when this occurred," McCulloch said. "She recounted a statement that was right out of the newspaper about Wilson's actions, and right down the line with Wilson's actions. Even though I'm sure she was nowhere near the place."

Buzzfeed reported that there was no indication that McCulloch's office instructed the grand jury to consider the credibility of any specific witness. His office has already been criticized for not immediately telling the jurors that a state statute giving officers more leeway on use of deadly force had been found unconstitutional. McCulloch himself has also been accused of being biased toward police.

According to the Associated Press, the interview aired amid a demand by state Rep. Karla May (D) that McCulloch be investigated by a bipartisan committee of state lawmakers.

The committee is already looking into why Gov. Jay Nixon (D) did not send the National Guard into Ferguson on Nov. 24 to help stop unrest and property damage in the city immediately following McCulloch's announcement that Wilson would not be brought to trial.

"Many St. Louis-area residents believe -- and there is at least some evidence to suggest -- that Mr. McCulloch manipulated the grand jury process from the beginning to ensure that Officer Wilson would not be indicted," May said in a letter to the committee's chairperson, state Sen. Kurt Schaefer (R).

Watch Millhaven's interview with McCulloch, as posted online on Friday, below.