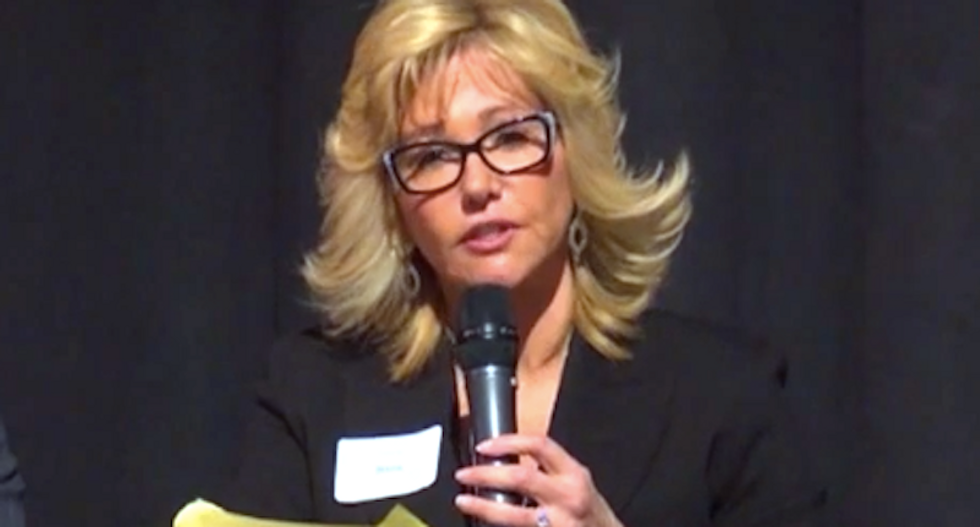 Sandy Rios, director of governmental affairs for the American Family Association and host of a daily radio program, did not specify what she meant by that – but her context was clear.

“Homosexual marriage is going to bring about the tip of the spear of the battle we’re going to face,” Rios said Thursday to a gathering of religious right activists and pastors.

Right Wing Watch reported that Rios warned participants that "your wives, your sisters, your children who now are going to be forced to go into public restrooms and share them with men dressed like women."

"In Massachusetts, where homosexual marriage has been legal for 10 years, the stories would make the hair stand up on the back of your neck,” she said, although she did not share any of those hair-raising examples.

She warned that Christians would be faced with a choice as soon as next month if the Supreme Court struck down laws banning same-sex marriage.

“If they do, every single person in this room is going to be forced to make a choice, and I’m just telling you: Even if you don’t want to engage in this battle, you will and your people will, and you’d better stand,” Rios warned.

She told the Christian activists to “stop playing it safe,” telling them the Bible encouraged bold action.

“You must prepare for martyrdom,” Rios said. “I don’t know what it’s going to look like, but it’s coming.”

Religious conservatives have been encouraging activists and lawmakers to pledge to commit unspecified acts of civil disobedience if the court strikes down bans against same-sex marriage.

Other anti-LGBT activists have warned the ruling could somehow lead to the mass arrest of Christians in the U.S.