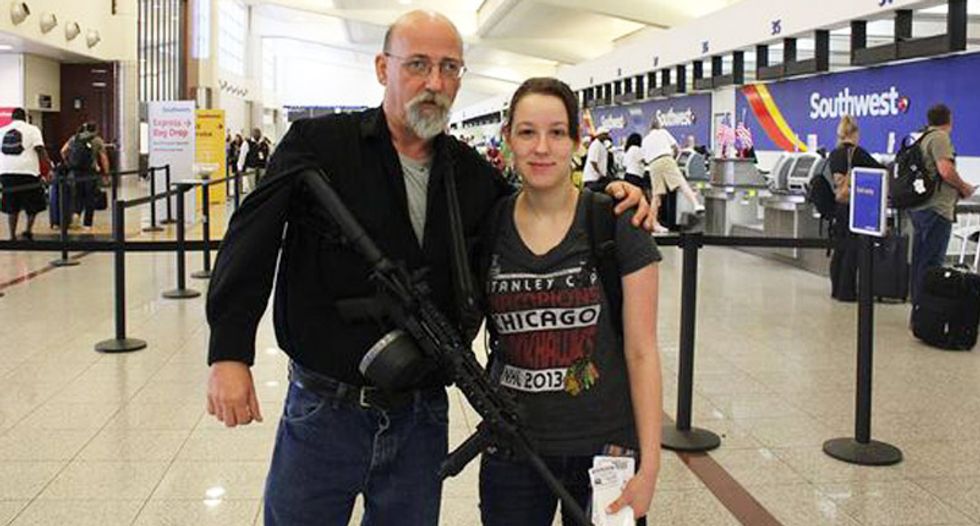 Taking advantage of his state's open carry laws, a Georgia man paraded around the Atlanta airport toting a loaded AR-15 simply because he could -- alarming police and airport security.

Jim Cooley carried his assault weapon with a 100-round drum attached to it while accompanied by his wife as they dropped their daughter off, alerting the press later after he was stopped multiple times by authorities.

In an interview with WSB-TV, Cooley explained that he knew it was legal to carry the weapon into the airport as long as he didn't approach any TSA checkpoints, explaining “You can carry in unsecured areas of the airport. Past TSA, never.”

While in the airport, Cooley was approached by a fire marshal asking him why he was carrying the gun, an Atlanta police officer who asked him if he had a carry permit, and then multiple officers who followed him to his car while taking pictures.

Asked why he carried the weapon, pausing to pose with it for a picture he later posted to his Facebook page, Cooley explained, “It shouldn’t matter what I carry, just that I choose to carry. You never know where something might happen.”

According to FBI agent Britt Johnson, Cooley did not break any laws, but refused to comment on the open carry law that went into effect in July of last year.

Asked by a reporter if it was reasonable to alarm people by lugging the loaded gun around even if it was legal, Cooley replied, "If you don’t exercise your rights, the government doesn’t have any hesitation taking them away.”

Watch video below from WSB-TV: