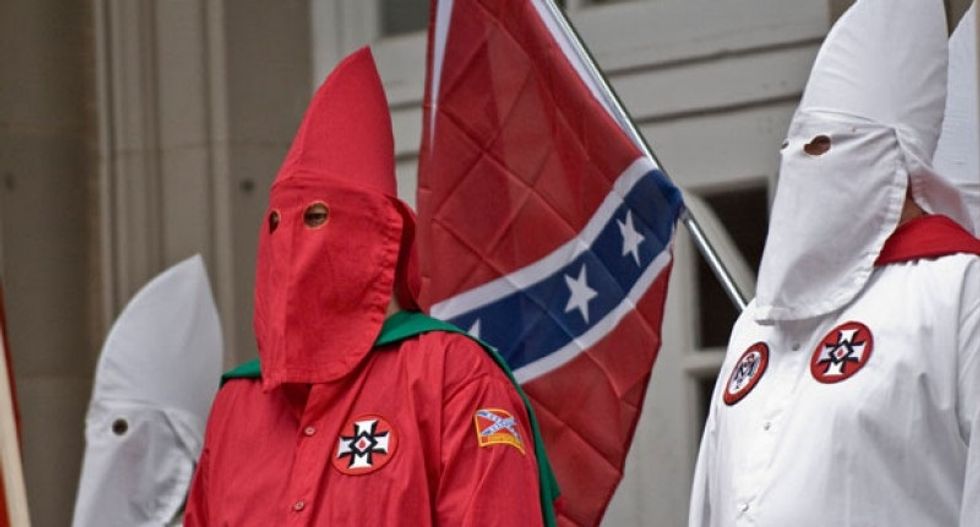 The KKK still plans to hold a pro-Confederate flag rally at South Carolina's statehouse, even though the flag was ceremoniously removed on Friday.

The rally is scheduled for Saturday, July 18 with permits granted to the Loyal White Knights of the Ku Klux Klan, with 100 to 200 people expected to be in attendance. According to local WYFF4, authorities have safety concerns because members of a black separatist group also plan to be there.

A temporary weapons ban has been put in placed around the statehouse in the days leading up to the rally, WYFF reports.

The Klan branch "Imperial Kommander" Amanda Lee told the station she's fine with racially-motivated violence so long as it's perpetrated against people selling "crack and drugs" on a street corner, but doesn't agree with the fact that accused Charleston shooter and avowed racist Dylann Roof gunned down nine unarmed churchgoers, including elderly women and a state senator.

Some members of the Klan have openly praised the actions of Roof, who has been charged with the shooting.

A group that launched a recruiting drive after the Charleston shooting called Roof a "warrior."

"The KKK would like to say hail victory to the young warrior in South Carolina, Dylann S. Roof who decided to do what the Bible told him," a recorded message says on the KKK's phone line, procured by RadarOnline. "If we had 10,000 more men like this young man, America would not be in the shape that it is in now. Blacks raped 35,000 white women last year. Zero black women were raped by whites."

Roof will stand trial for killing nine African-Americans at a Bible study on June 17 at the landmark black church, Emanuel AME in Charleston. Among his victims were State Senator and civil rights leader Clementa Pinckney. Roof sat with the group in worship for an hour before gunning them down. He has said he almost didn't go through with it because he was treated so kindly by them.

Lawmakers voted to take the Confederate flag off the statehouse with an emotionally-wrought process, citing that Roof had multiple images of himself adorned by Confederate flag imagery. South Carolina Rep. Jenny Horne, a descendant of Jefferson Davis, demanded the symbol of hate come down in honor of the Charleston victims.

"I can not believe that we do not have the heart in this body to do something meaningful such as take a symbol of hate off these grounds on Friday," she said Wednesday, through tears.

It turned out they did have the heart. The South Carolina legislature voted and the flag was removed Friday.