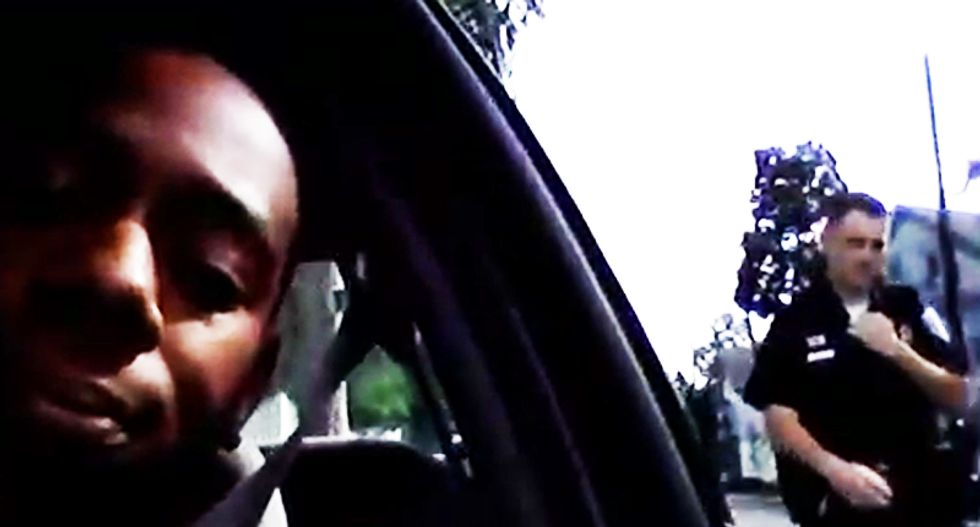 A black Rhode Island man already had his cellphone out and was recording when he was pulled over by a Providence police officer for the crime of having an air freshener dangling from his rear view mirror, the Providence Journal reports.

On the video, uploaded to YouTube by Harris, the officer asks Harris for his license and registration, ignoring questions from Harris about why he was pulled over.

"You seen me come out of my driveway. What did I do wrong?" Harris asks, adding, "I have a cousin who's a Providence police officer for 23 years. What's the problem? ... I'm tired of this. I'm not a gangster. I'm not a thug."

Ignoring his questions, the officer -- identified as  Brian Murphy -- then asks for his insurance information while speaking into the radio mounted on his shoulder.

After handing back the paperwork, Murphy points toward the car's windshield and says, "You can't have this obstructing your view."

"Come on, are you serious?" Harris replies.

"Yeah, I'm serious, you can't have that there."

"Air fresheners? ... That's the reason you pulled me over?" Harris asks.

"Yup," the officer says, not giving a ticket and the returning to his cruiser.

"You're bored, I can tell you're bored," Harris said as Murphy walked away. "Have a good day, man."

After the video went viral, Harris and two community activists met with police authorities who explained that Murphy was watching the Harris household, on the look-out for his stepbrother, 18-year-old Justice McLaren who has an outstanding warrant for breaking into a home. A detective explained that Murphy pulled Harris over looking for McLaren, and didn't know if he could tell him about the warrant.

A police spokesperson called the stop "justified" based upon "the totality of the circumstances."

For his part, Harris justified filming the encounter, saying, "You never know what can happen with what's happening across the world today. What if I didn't record him, and it got out of hand? Then the police and court would be siding with the cop. I need to make sure they do the right steps and do the right procedures."