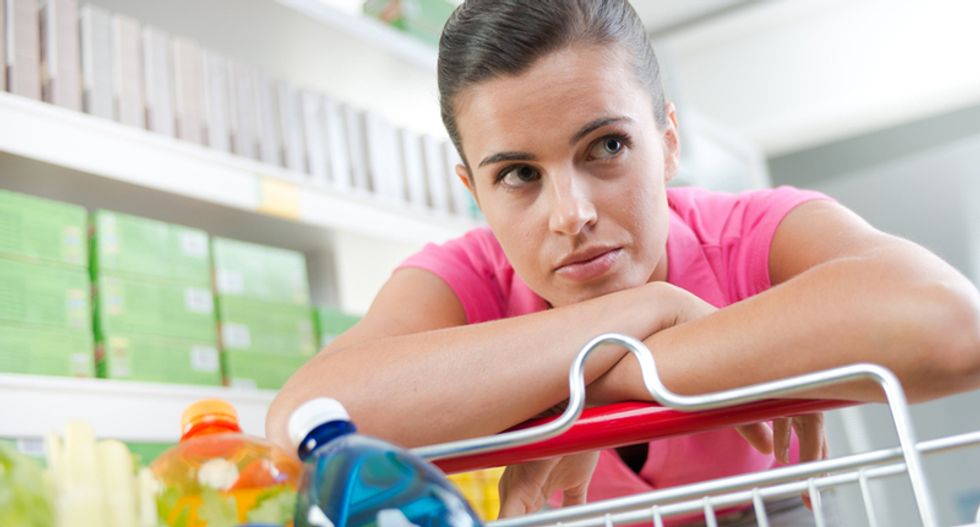 Exhausted woman at the supermarket (Shutterstock)

The World Bank and other global institutions use a very specific measure to record global poverty rates. They gather data designed to record the number of people in a country who live on less than $2 a day, and then use the information to make a “poverty headcount ratio”— the percentage of people in a country who live under this standard. In most recent data, Sierra Leone, for example, had a staggering 82.5% of its citizens living in poverty by this count.

What is less known is that millions of Americans are living in situations of similar poverty. A new book, $2.00 a Day: Living on Almost Nothing in America, explores the status of Americans who face this extreme level of poverty

“Most of us would say we would have trouble understanding how families in a country as rich as ours could live on so little," Kathryn J. Edin, who co-wrote the book with H. Luke Shaefer, said in a conference call recorded by CBS News. "These families, contrary to what many would expect, are workers, and their slide into poverty is a failure of the labor market and our safety net, as well as their own personal circumstances."

According to her research, the number of Americans living on $2 a day or less has “more than doubled since 1996, placing 1.5 million households and 3 million children in this desperate economic situation.”

1996 is an important marker, because that's the year the Clinton administration, working alongside Republicans in Congress, eliminated the Aid for Families with Dependent Children program, which provided a guaranteed safety net for the poor. In its place they created Temporary Aid for Needy Families (TANF), a much more meager and temporary safety net. CBS News notes that the two authors of the book cite this change as harming the poor:

TANF isn't working, Shaefer and Edin said. Since the program was created in 1996 to replace a 60-year-old welfare system, the number of families living on less than $2 a day has more than doubled. In 2012, only one-quarter of poor families received TANF benefits, down from more than two-thirds in 1996, according to the Center on Budget and Policy Priorities. According to $2.00 a Day, the welfare program reached more than 14.2 million Americans in 1994, but by 2014 only 3.8 million Americans were aided by TANF.

The authors' research, which includes data analysis and interviews with ultrapoor families in four regions, found that many families aren't even aware of TANF. "One person said, 'They aren't just giving it out anymore,'" Shaefer said. "In fact, in Appalachia it has, in some ways, disappeared. We asked, 'Have you thought about applying for TANF?' and they said, 'What's that?'