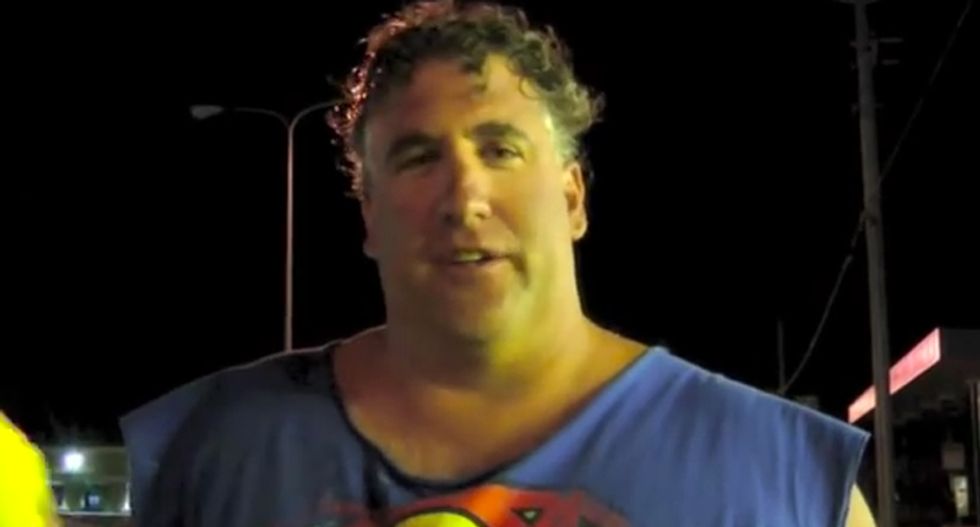 A man who has spent 20 years standing on St. Cloud, Minnestota streets dressed as Superman and harassing passersby got into a shouting match with a student that almost led to blows after he was accused of calling the man a "n***r."

In video uncovered by the City Paper, John Fillah -- a mainstay on St. Cloud's streets for his bizarre antics dressed as Superman -- gets into a shouting match with student who was passing by and threats to fight begin to fly as police quickly pull up and step between the men.

The unidentified student can be seen claiming Fillah called him a "n***r," saying, “Step off the curb. I don’t care how much you weigh. Call me another nigger again.”

Fillah replies that he was only replying in kind after the student used the word on him.

As the one student is conducted away by a police officer, another man steps into the fray as Fillah accuses the men of being "racist" against him because he's Lebanese.

Fillah has an interesting history in the area, with St. Cloud State maintaining a trespass order barring him from campus property and the local Dairy Queen also having a restraining order on file preventing him from getting too close to their establishment.

Because of previous student altercations with Fillah -- whose belligerent curbside hate speech is protected by his First Amendment rights -- St. Cloud State has issued continuous  advisories to students to avoid him without naming him, according to Fox9.

"If a presenter on public property is commenting on or promoting a point of view that you do not agree with, it is your right to avoid the area and walk away," the advisory reads.

Watch the altercation video and an interview with Fillah below, via YouTube: