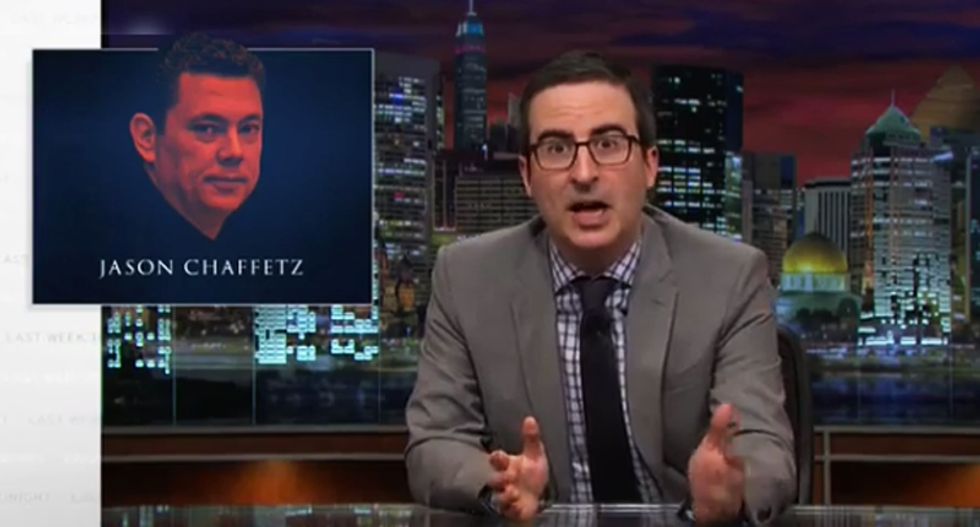 On Last Week Tonight, host John Oliver took time to poke fun at the bumbling Secret Service for trying to embarrass equally bumbling Rep. Jason Chaffetz (R) despite the fact that the Utah congressman manages to do that for himself on an almost daily basis.

This week it was revealed that the Secret Service released "unflattering private information" about Chaffetz in retaliation for his investigation into their recent missteps.

"That's right. The Secret Service attempted to embarrass one of their biggest critics, Congressman Jason Chaffetz, by leaking his rejected application to join them, essentially behaving like the high school table of mean girls," Oliver said before affecting a snotty teen girl's voice. "You only hate us because we won't let you sit with us, Jason. Don't look at our food. You're making it uncool."

Oliver marveled that the higher -ups in the Secret Service were wasting their time attempting to mess with Chaffetz who is considered a bit of goof regardless of his rise within the GOP leadership.

The host then shared a clip of Chaffetz being humiliated by Planned Parenthood head Cecile Richards last week when he showed her a chart he claimed came from her own organization -- only to have her explain to him that it was the work of an anti-choice group.

Oliver also shared clips of Chaffetz in his office sampling and judging hamburgers and getting choked up over the 1865 death of Abraham Lincoln.

"What are you crying about?" a mocking Oliver asked. "It was 144 years ago! It's time to move on. He was going to be dead by now anyway!"

Watch the video below captured by Crooks & Liars: