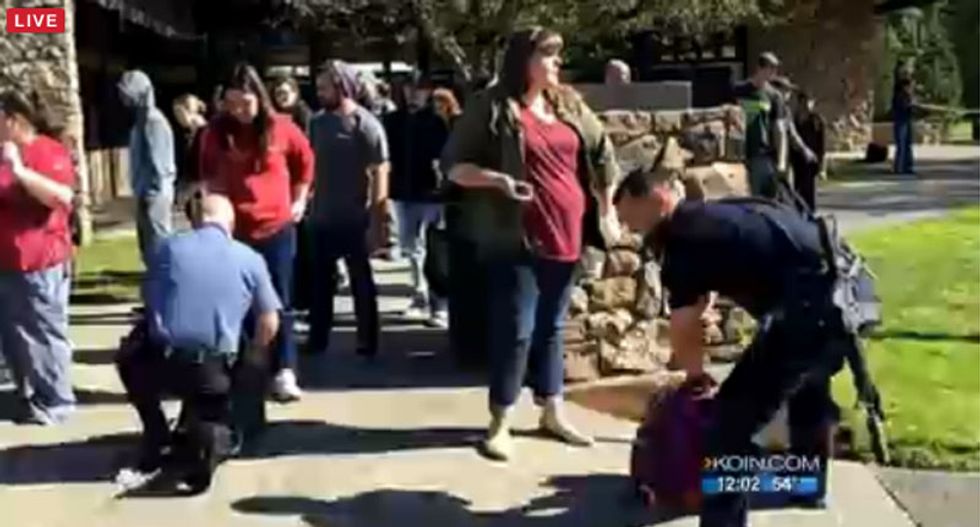 UPDATE: The gunman was a 20-year-old man who was killed after a shootout with police, the Oregon governor said.

UPDATE, 7:55 pm EST: Douglas County, Oregon Sheriff John Hanlin said at a press conference that 10 people were killed in the shooting and seven others were wounded.

UPDATE, 9:30 p.m EST: The gunman has been identified as 26-year-old Chris Harper Mercer.

A gunman opened fire on Thursday at a community college in Oregon, killing 13 people and wounding some 20 others, in the latest mass killing to rock a U.S. school, officials and local media said.

There were conflicting reports on the number of casualties and wounded at Umpqua Community College. The state's attorney general told the local NBC affiliate that 13 people had been slain, 20 wounded and the shooter was killed.

The suspect was not identified but CNN reported it was a man in his late 20s.

Douglas County Commissioner Chris Boice said the shooting left about 30 casualties, but he could not immediately say how many of those people died and how many were injured.

The shooting is the latest incident of gun violence in the United States, raising demands for more gun control and more effective treatment of the mentally ill. Recent episodes of gun violence include the massacre of nine people at a South Carolina church last spring and the killing of five U.S. servicemen in Chattanooga, Tennessee.

CNN reported that one of the wounded was a female who had been shot in the chest. The Oregonian said that at least six patients were critically injured in the shooting, citing an official with Life Flight.

The Douglas County Sheriff's office said on Facebook that officers had responded to a shooting at the college following 911 calls at 10:38 a.m. local time.

Mercy Medical Center in Roseburg said on Facebook that the hospital had received nine patients from the shooting and had been advised that three more were en route.

Local media reported that authorities were combing through the campus, which serves more than 13,000 students, 3,000 of them full-time. Fall term began at the college on Monday.

The Douglas County Sheriff's Office said students and faculty members were being bused to the nearby fairgrounds where they could be picked up.

President Barack Obama was briefed on the shooting by Lisa Monaco, his homeland security adviser, a White House official said.

The FBI said agents were responding from offices in Medford, Eugene, Salem and Portland.

The Oregonian said agents from the U.S. Bureau of Alcohol, Tobacco, Firearms and Explosives were also en route to Roseburg, a city of about 20,000 people some 260 miles (418 km) south of Portland.

In 2012, seven students at the small Christian college Oikos University in Oakland, California, were shot dead by a former student, marking the deadliest outburst of violence at U.S. college since April 2007, when a student at Virginia Tech University killed 32 people and wounded 25 others before taking his own life.

In dispatch audio published on YouTube, police said the suspect had a long gun:

Watch live coverage via Fox 4 below:

An alternative live stream is available via KOIN:

'Bat Out of Hell' singer Meat Loaf dead at 74

US singer and actor Meat Loaf, famous for his "Bat Out of Hell" rock anthem, has died aged 74, according to a statement on Friday.

"Our hearts are broken to announce that the incomparable Meat Loaf passed away tonight with his wife Deborah by his side," read a statement on his Facebook page.