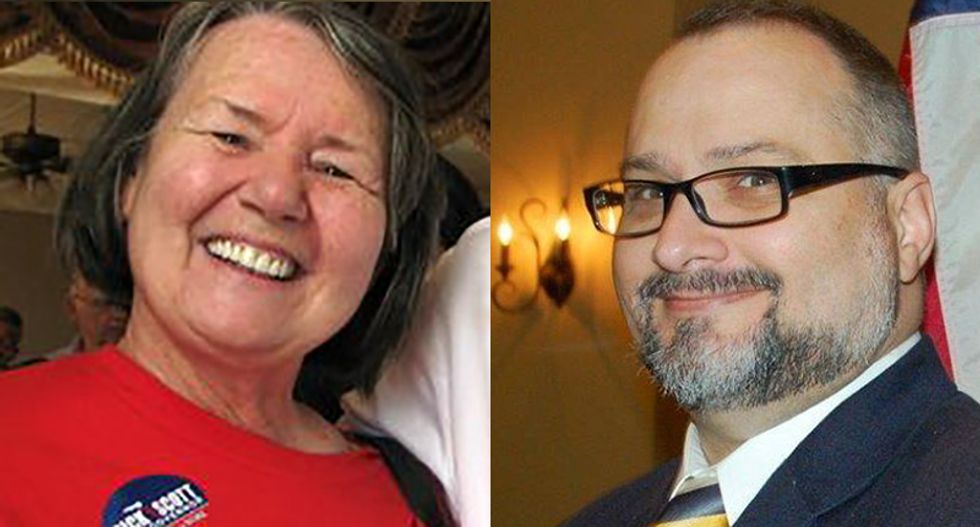 A Florida county is considering changes to its charter review board after two elected members have focused on punishing political enemies through extralegal tactics instead of government business.

The Sarasota County charter review board typically proposes minor changes to the county charter when they meet three times a year, but critics say two of its members -- Pat Wayman and Steven R. Fields -- have been using their positions to usurp authority from other elected officials, reported the Sarasota Herald-Tribune.

The pair have voted to establish a "people's common law grand jury," which sovereign citizens and other anti-government extremists have proposed to investigate and prosecute government officials for treason -- which, as they frequently point out, carries a potential death penalty.

“Take a look at the French Revolution and what took place there," said Mike Bolam, who has attended charter review board meetings to support the common law grand juries.

“Grand jury powers come from God,” Dowdell said, advocating a return to the post-Revolution legal system where there were no police departments and judges rode horseback to hear cases brought by groups of 25 citizens.

Most importantly, he told the Herald-Tribune, those rulings would be kept out of reach of presidential and even U.S. Supreme Court authority.

“A people's common law grand jury can, without any probable cause, go into any nook or cranny of government — local, state or federal — research anything that's going on and root out corruption,” Dowdell said. “We want to government to recognize the contract we call the constitution, and start obeying the law. It's very simple.”

His proposal failed due to the tie vote.

Tea Party activists have been trying to set up common law grand juries, which don't actually carry any legal authority, for years in hopes of convicting -- and hanging -- President Barack Obama for treason.

“I can't talk about it,” he said. “Everything is secret. In order to keep innocents who may be investigated from being damaged, whatever a grand jury does is secret.”

Wayman, the charter board member, posted a petition Oct. 12 on her Facebook page calling for Obama's arrest on murder and treason charges, and she has also posted videos questioning whether mass shootings were staged in Sandy Hook and Oregon.

She also promotes the pro-gun extremist III Percent group and warns against a United Nations takeover of the United States through its non-binding Agenda 21 agreement.

Fields, the other charter board member, expresses conservative political views that are a bit more mainstream -- with posts expressing his love for guns, law enforcement, the military, Glenn Beck, Andrew Breitbart and Ronald Reagan -- but he also voted for Dowdell's measure.

“If someone brings an idea that we can do, that's something we should take a look at,” Fields said. “I've seen the federal government grabbing more rights away from people. They bribe states into federal control. The Charter Review Board should not be acting like the County Commission and protecting the status quo. And I don't think (the people's common law grand jury) has anything to do with sovereign citizens.”

The other members of the board are also unaware of the links between common law grand juries and the sovereign citizen movement -- which federal authorities consider a domestic terrorist threat.

“That's the antithesis of what I'm all about,” said Donna Barcomb, the Republican chairwoman of the charter review board, told the Herald-Tribune. “I don't think board knew anything about that concept. It was a group of individuals who presented a concept to the board. That's what the Charter Review Board does — not leaning one way or another. Frequently, the board will look at something and determine if it's appropriate or in the best interests of the county. For the most part, and I include myself in this, we're completely ignorant about the concepts.”

She said the charter board could recommend a ballot initiative that would put Sarasota County in line with all other Florida counties, which appoint charter board members instead of electing them.

However, just about 200 miles north, sovereign citizens are threatening to arrest or physically harm elected officials in Dixie County, Florida -- where a Tea Party activist was arrested after trying to turn a legitimate jury into a common law grand jury.

“I'm getting harassing emails and threatening faxes saying they're going to arrest me,” said Dana Johnson, the clerk of courts, told the Herald-Tribune. “This one says they want info on bonds and oaths. There are further demands. I'm concerned about my safety. The local sheriff has alerted (the Florida Department of Law Enforcement) and the FBI. Anytime they come up on our public agenda we have security with us at all times.”

Terry Trussell, who helped organize the failed Operation American Spring rally to drive Obama from office, has been charged with 14 counts of impersonating court officials.

“Once Trussell got selected to serve on a legitimate grand jury, it became the perfect storm,” Johnson said. “From that point, he's taken it on his own authority to create a sovereign citizen board of common law grand jurors. I am constantly scared.”

The Dixie County sheriff, who said he's known Trussell all his life and is acquainted with Dowdell, said the anti-government activists had asked him to help with their indictments.

“I said any order has to be signed by a judge — whether it's a warrant or whatever — it's got to be a legal court document,” said Sheriff Dewey Hatcher. “They 'indicted' everyone from the governor and (Attorney General) Pam Bondi on down to the president of our school board, and they said the school board attorney should be fired.”

The sheriff said he has not arrested anyone in connection with those indictments.