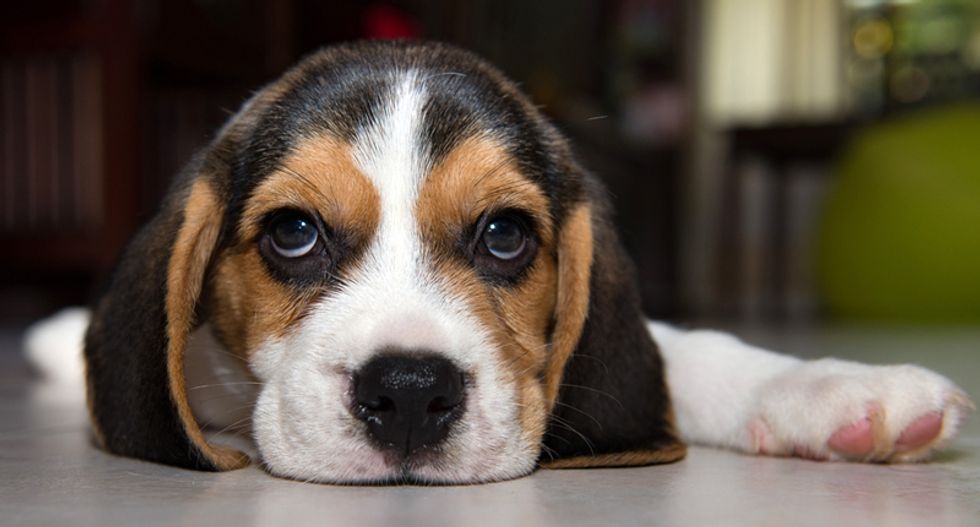 A beagle puppy at home ( Shutterstock)

At first glance, the beagles running round the enclosure of the Royal Veterinary College look typical of the breed. Inquisitive and affectionate, the dogs rush from visitor to visitor, anxious to play and make contact. Endearing behaviour like this has made the beagle one of Britain’s most popular breeds.

But closer scrutiny shows something unusual: some beagles look a little clumsy and weak on their paws. Occasionally one will stagger or stop in its tracks. The cause of this behaviour is straightforward. The dogs have the inherited the wasting condition muscular dystrophy. Crucially, the animals – kept at the college’s site near Potter’s Bar, Hertfordshire – suffer from a version very similar to the disease’s most common human version, Duchenne muscular dystrophy .

The college’s colony has been created to help researchers pinpoint treatments that could halt the disease’s dreadful progress in humans – and in dogs. “A host of promising new methods have been developed for treating muscular dystrophy in recent years, and these are now ready for trials,” said Professor Richard Piercy, an expert on neuromuscular disease at the college. “We could use rats and mice, but beagles are far closer to humans in size and physiology, and their responses to treatments will give us far greater insights into patients’ likely clinical responses to drugs we develop.”

Duchenne is caused by a mutated gene carried by symptomless females. Male children who inherit the mutation cannot produce the muscle protein dystrophin, which is vital for building and repairing muscle. The disease affects around 2,500 boys in the UK at any one time and starts to manifest itself around the age of five. By 12, most use wheelchairs and many die in their late 20s.

The impact on boys and their families is devastating, as Sue Davies (not her real name) makes clear. Her seven-year-old son, Harry, has Duchenne and already notices he is different from his brother, Jack, and his friends. “It is heartbreaking to watch as he gets more and more frustrated that he can’t do the small things like climb, or run fast, or play football as well as his brother,” said Sue. “If there was a treatment for Harry – even one that would just give us some extra time – it would mean more than I can say.”

The Royal Veterinary College’s beagle project began a few years ago when a family of dystrophic dogs, which had been bred from a cavalier king charles spaniel and a bichon frise, was discovered by vets. Dogs from this family were bred with beagles to produce the college colony. As a result these dogs sometimes have fluffier coats than normal. In the past, the use of beagles in experiments – including research concerned with tobacco – has caused considerable controversy and triggered accusations of animal cruelty. However, the college’s scientists emphasise that their dogs are treated with care and compassion.

“We chose to create a colony of beagles with muscular dystrophy, rather than other dogs, because the breed possesses fewer genetic problems than other types of dogs. That makes our results easier to interpret,” said Professor Dominic Wells, of the college’s neuromuscular group.

Having created the colony, college researchers are now studying the progress of the disease in individual dogs, which usually have to be put down at around 18 months old as the disease takes its toll on their muscles. “We are giving them MRI scans, we are studying the action of their hearts, and we are taking muscle biopsies and blood samples,” said Wells. “We need to find out the best time in their lives to treat them in order to reveal most clearly if they are deriving benefit from the drugs we are giving them. That will provide real insights into human responses to new drugs.”

Wells added that potential new treatments for Duchenne were being developed in laboratories around the world. The most promising involve a technique known as anti-sense therapy.

“Essentially we add small strands of DNA to a subject so that the disrupted message from their genes to the protein-making cells in their body is restored and their cells start to make dystrophin again,” said Wells. “We hope to begin testing this kind of treatment on our beagles next year, and if those trials go well, we can think about trials on humans. Ultimately we would give these drugs to young patients not long after birth and so stop the disease from ever damaging their bodies. You could call that a cure.”