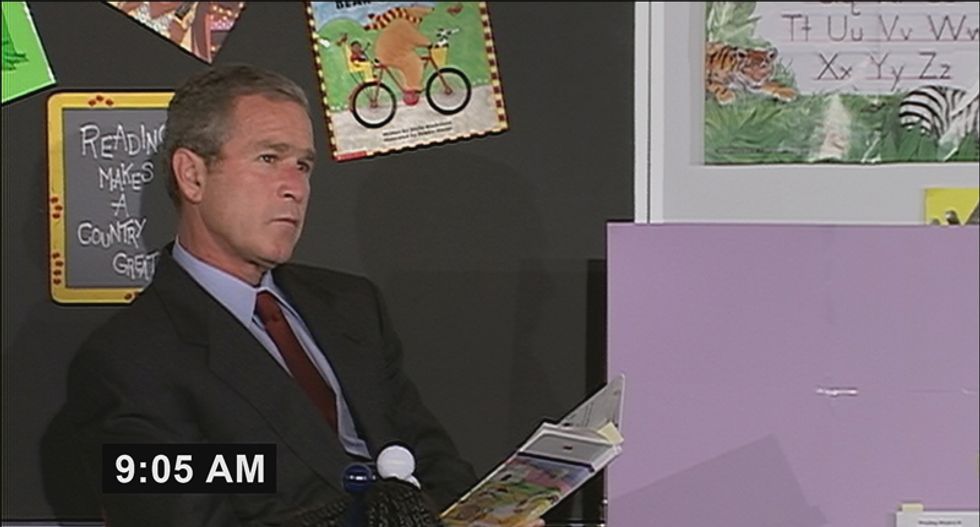 According to ex-CIA head George Tenet and Cofer Black, then chief of the CIA’s counterterrorism center, they called an emergency meeting with National Security Adviser Condoleezza Rice on July 10 of 2001 saying they had evidence that an attack on the U.S. was imminent and that it would be "spectacular."

Beginning in May of 2001, Tenet and Black launched an initiative called “the Blue Sky paper” and pitched it to Bush’s  national security team. The CIA called for a joint CIA  and military campaign to end the Al Qaeda threat by “getting into the Afghan sanctuary, launching a paramilitary operation, creating a bridge with Uzbekistan.”

According to Tenet, the Bush administration said they wanted to back-burner the plan.

“And the word back,” claims Tenet, “‘was ‘we’re not quite ready to consider this. We don’t want the clock to start ticking,’” meaning they didn't want a paper trail.

According to Black, Bush's national security team was living in the past.

"I think they were mentally stuck back eight years [before]. They were used to terrorists being Euro-lefties—they drink champagne by night, blow things up during the day, how bad can this be? And it was a very difficult sell to communicate the urgency to this,” he explained.

In July, after receiving more confirmations of upcoming attacks, Tenet and Cofer demanded an immediate meeting with Rice.

“Rich [Blee] started by saying, ‘There will be significant terrorist attacks against the United States in the coming weeks or months. The attacks will be spectacular. They may be multiple. Al Qaeda's intention is the destruction of the United States.’"  Tenet remembered.

According to  Tenet, "[Condi said:] ‘What do you think we need to do?’ Black responded by slamming his fist on the table, and saying, ‘We need to go on a wartime footing now!’”

When asked "what happened?" after the meeting, Black said nothing much.

“Yeah. What did happen?” Black said. “To me it remains incomprehensible still. I mean, how is it that you could warn senior people so many times and nothing actually happened? It’s kind of like The Twilight Zone.”

In her memoir, Rice mentioned the meeting but found it indistinguishable from other meetings she had with intelligence officials because they were discussing threats "every day."

According to Tenet, the CIA group met at the end of July and once again discussed the looming threat.

“We were just thinking about all of this and trying to figure out how this attack might occur,” Tenet remembered. “And I'll never forget this until the day I die. Rich Blee looked at everybody and said, ‘They're coming here.’ And the silence that followed was deafening. You could feel the oxygen come out of the room. ‘They're coming here.’”

Asked how he now feels about the timeline leading up to the 9/11 attack that left over 3,000 dead, Tenet told Politico he was resigned.

“Well, look, there … I still look at the ceiling at night about a lot of things. And I'll keep them to myself forever. But we're all human beings."