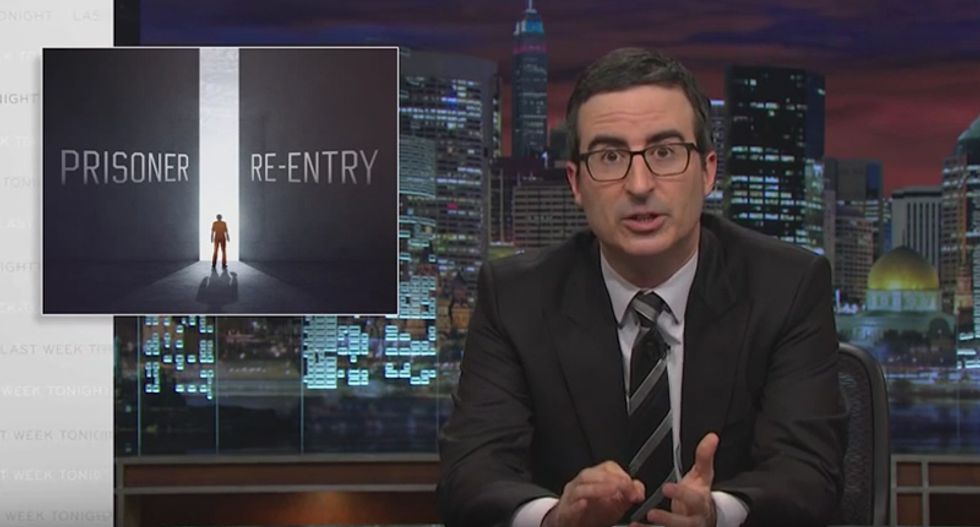 On HBO's Last Week Tonight, host John Oliver continued his focus on the American legal system and how it impacts the poor by taking a look at what former prisoners have to look forward to after they leave jail.

With the federal government releasing over 6,000 non-violent drug offenders, Oliver first wanted to bring them "up to speed" on what they had missed while in prison.

"Uber has replaced cabs. Everyone is pretending to like kale now," he explained. "Matthew McConaughey has an Oscar, and in four states pot is legal which, for some of you, must feel like a cruel, cruel irony."

Oliver pointed out that the number of new releases is relatively low compared to the 600,000 prisoners released each year -- despite panicky news teasers from Fox News warnings of violence and danger.

Yet, with recidivism rates over 50 percent, Oliver explained,“For a surprisingly high number of prisoners, their time on the outside may be brief.”

Despite the government spending $80 billion on the penal system, the high recidivism rate is created by a society and a parole system that won't allow those who have served their time to get on with their lives.

With companies refusing to hire ex-cons who note on job application time served, even if an ex-con manages to find a job and “are trying their hardest, satisfying the conditions of parole can be maddeningly difficult,”

"Two-thirds of parolees who go back to prison do so, not due to a new crime, but because of parole violations,” Oliver explained, due to “missing appointments or failing a drug test. For some of them, it may be because they’re dealing with untreated substance abuse or mental illness.”

According to one parolee who found a 9-to-5 job, but couldn't make his meetings with his parole officer who left work at 4:30 each day, “I felt set up. I feel like most people in that situation are set up to fail.”

“It’s not always easy to care about the welfare of ex-prisoners, and some are going to re-offend no matter what you do,” Oliver said. “But the fact remains, over 95 percent of all prisoners will eventually be released, so it’s in everyone’s interest that we try to give them a better chance of success.”

Watch the video below for Last Week Tonight: