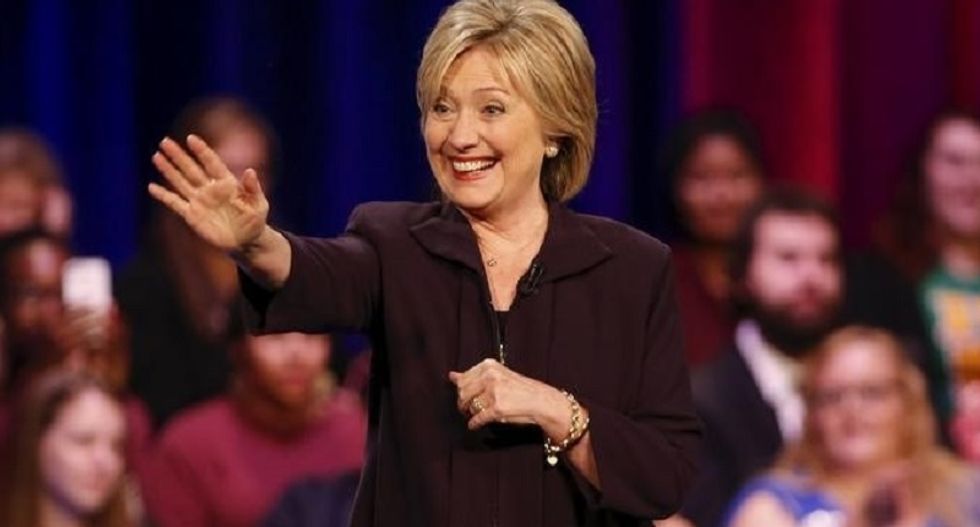 U.S. Democratic presidential front-runner Hillary Clinton vowed on Saturday not to raise taxes on middle-class Americans if elected next November in a populist push to position herself for a general election battle on pocket-book issues.

Clinton, at a debate with rivals Bernie Sanders and Martin O'Malley, repeatedly zeroed in on Republican presidential front-runner Donald Trump, at one point accusing him of helping Islamic State militants recruit new members with his vow to ban Muslims from entering the United States.

The two-hour debate, moderated by ABC News, did not appear to change the trajectory of the 2016 Democratic race for the White House, with Clinton hanging on to a big lead in polls of Democratic voters and Vermont Senator Sanders and former Maryland Governor O'Malley still searching for breakthrough moments.

Clinton questioned the affordability of some of Sanders' proposals such as creation of a single-payer healthcare system and tuition-free college, suggesting these plans would lead to higher taxes on working families.

She pledged not to raise taxes for middle-class families and said such a tax “should not be part of anybody’s plan right now.”

“I don’t think we should be imposing big new programs that are going to raise middle-class families’ taxes,” the former secretary of state said. “We’ve got to get back to where people can save money again, where they can invest in their families.”

Sanders, seeking to bite into Clinton’s big lead in polls of Democratic voters, criticized her for supporting the speedy departure of Syrian President Bashar al-Assad, who has resisted all diplomatic efforts to leave power with a civil war raging in his country and swathes of territory controlled by Islamic State, also known as ISIS.

“Secretary Clinton is too much into regime change and a little bit too aggressive without knowing what the unintended consequences might be,” Sanders said. “Yes, we could get rid of Assad tomorrow, but that would create another political vacuum that would benefit ISIS.”

“Regime change is easy. Getting rid of dictators is easy. But before you do that, you’ve got to think about what happens the day after," said Sanders, a democratic socialist.

Clinton rejected the criticism and pointed out that Sanders as a U.S. senator from Vermont had voted “for regime change with respect to Libya” in 2011.

And she disagreed with Sanders’ assertion that the U.S. military should prioritize the fight against Islamic State over working to get Assad to leave power, saying both should be done at the same time.

“We will not get the support on the ground in Syria to dislodge ISIS if the fighters there - who are not associated with ISIS, but whose principal goal is getting rid of Assad - don’t believe there is a political diplomatic channel that is ongoing. We now have that,” Clinton said.

“It’s very important we operate on both at the same time.”

O'Malley accused his rivals of being too soft on gun control. He is far behind in the polls and needs to shake up a race increasingly tilting against him with six weeks to go until Iowa holds the first nominating contest on Feb. 1. He said Clinton and Sanders had adopted more aggressive positions on gun control in the wake of this year's mass shootings.

O'Malley also said Islamic State militants have advised recruits that the best way to get a weapon in the United States is at a gun show where rules are more lenient on the purchase of a firearm. This is a result, he said, of "flip-flopping" by Sanders and Clinton.

Sanders said he had lost an election in Vermont for a gun-control stance and Clinton said she had backed gun-control measures.

The Democrats' third debate was marked by controversy from the start over a recent data breach of Clinton's campaign voter files by a Sanders staffer, who was subsequently fired.

Sanders apologized to Clinton for the breach.

"Yes, I apologize," he said when asked about the controversy during the debate, but he renewed his criticism of the Democratic National Committee for freezing access to his own voter files until the issue was resolved late on Friday.

Clinton, whose campaign said Sanders made a number of breaches into Clinton computer files, accepted the apology and said it was time to move on.

"I very much appreciate that comment, Bernie," she said. "Now that I think we’ve resolved your data, we’ve agreed on an independent inquiry, we should move on. I don’t think the American people are all that interested in this."