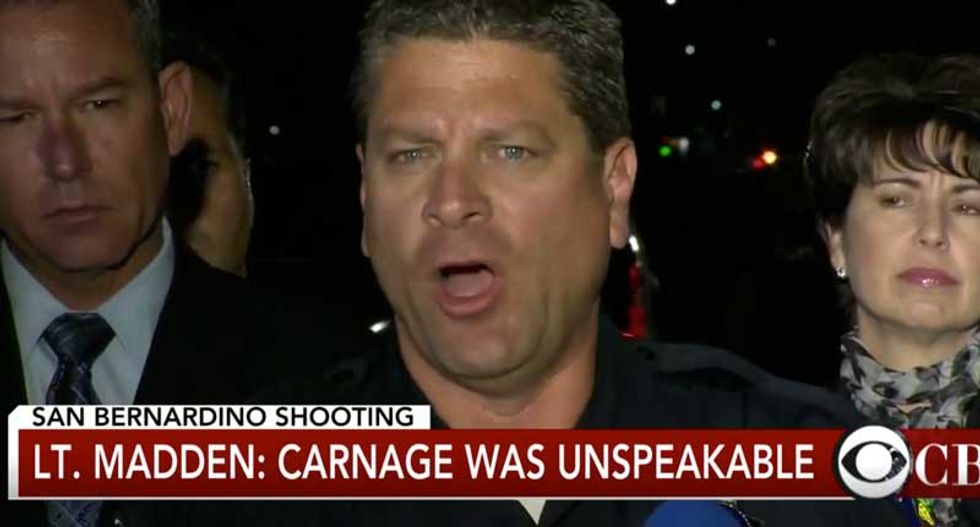 The first police officer to arrive at the scene of the San Bernardino mass shooting has provided a shocking account of the immediate aftermath of the attack and the “pure panic” on the faces of the those who survived.

Lieutenant Mike Madden, an administrative commander at San Bernardino police, was less than a mile away from the Inland Regional Center when 911 dispatchers circulated a message of active shooters at the complex.

Madden told a media conference on Thursday that he could “hear in the voice” of the dispatchers that they were dealing with a major atrocity.

Soon after he arrived, Madden was met by three other officers, who together formed the “entry team” who were first to arrive at the location of the massacre: a conference room hired by the San Bernardino county health department for a training session and staff Christmas luncheon party

Just moments earlier, Syed Farook, 28, an employee at the department, and his wife, Tashfeen Malik, had entered the room with automatic rifles and sprayed the room with bullets. There are estimated to have been as many as 85 people inside the room at the time. The married couple also tried and failed to detonate an improvised bomb strapped to a small, remote-controlled car.

“It was unspeakable, the carnage that we were seeing, the number of people who were injured and unfortunately already dead,” Madden said. “The pure panic on the face of those individuals that were still in need.”

In total, 14 people died in the attack – all but two of whom were county employees. The victims identities were released Thursday; among them were a father of six, a coffee shop owner, a physical education teacher, a health inspector who followed his love to California. A further 21 people were wounded. Farook and Malik died four hours later after a shootout with police.

Police and the FBI have still not ascribed a motive for the killing spree but have declined to rule out terrorism.

“The situation was surreal,” Madden said, describing the scene to reporters. The sound of fire alarms mixed with the “moans and wails” of injured people, adding he could still smell remnants of gunpowder in the air.

Amid the carnage, Madden recalled seeing a Christmas tree “and all of the tables decorated for a Christmas party”.

“It just seemed so senseless,” he said. “These people were going into their holiday festivities and now they were dealing with that.”

Madden, a 24-year veteran of the force, and a native of the small Californian city, appeared emotional as he spoke more than 24 hours after the shooting. He described his job was “to bring calm to chaos”.

It was particularly difficult, he added, to walk past people in desperate need of medical attention, in the knowledge that he and the other three officers had to push on, walking through corridors in search of shooters they assumed were still in the building. He stressed that officers tried to stay calm. “These people have already dealt with enough. The last thing they need to see is police officers panicking.”

He and the other officers also found it difficult, in the first instance, to persuade the survivors holed up in an adjacent room to trust them enough to follow their instructions to leave the building.

Toward the end off his appearance before the media, which was arranged by San Bernardino police, Madden was asked about video footage showing another officer escorting nervous survivors from the building and, in a bid to reassure them, saying “I’ll take a bullet before you do, that’s for damn sure”.

Madden said he did not know the identity of the officer, but said the video excerpt was a typical representation of how San Bernardino’s police responded on Wednesday. “That was happening everywhere,” he added.

Watch video of his press conference below: