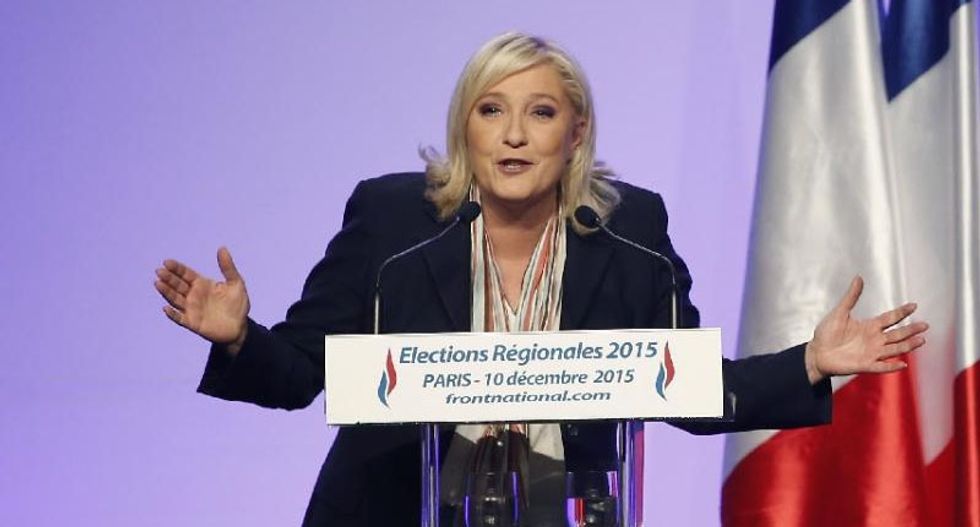 France's far-right National Front (FN) is hoping to transform record gains in regional elections into triumph in the second round on Sunday, giving leader Marine Le Pen a springboard for her presidential bid in 2017.

The ultra-nationalist FN, which wants to suspend immigration and pull France out of the euro, topped the vote in six of 13 regions in the first round of voting last weekend, confirming its status as France's most popular party.

But it faces an uphill battle to convert that win after the ruling Socialist Party withdrew its candidates from two regions and urged their supporters there to back Nicolas Sarkozy's Republicans.

A TNS-Sofres poll showed Le Pen, who heads the party list in the rustbelt northeastern Nord-Pas-de-Calais-Picardie region, being beaten by the Republicans' Xavier Bertrand by 53 percent to 47 percent.

At the other end of the country, in the sun-kissed Provence-Alpes-Cote d'Azur region, her 26-year-old niece Marion Marechal-Le Pen was shown trailing the Republicans' Christian Estroi, with 46 percent to his 54 percent.

Both women had far outrun their conservative rivals in the first round, each winning over 40 percent of the vote in a packed field.

Jean-Yves Camus, an expert on the FN and co-author of "The Far Right in Europe", said the FN's trump card was its lack of experience.

"The FN's biggest advantage is that it is not tainted by the errors of others. They have never had to be accountable, so people are increasingly asking themselves 'Why not the FN?'"

But the party's hopes of winning its first-ever region could be dashed by its opponents' political manoeuvering.

The Socialists have sacrificed their candidates in the regions where Le Pen and her niece are running, calling on voters to back the opposition.

A combative Marine Le Pen has slammed such tactics as "undemocratic" and in a speech late Thursday accused her opponents of "intellectual terrorism" in seeking to block her party's path to power.

She also vowed if elected to "make the government's life a misery, do you hear me? Every day, every week."

Nationwide, the FN took 28 percent of the vote last week, ahead of 27 percent for the Republicans and their allies.

President Francois Hollande's Socialists sustained their fourth electoral drubbing since coming to power in 2012 as voters punished his failure to tackle unemployment, but held up better than expected with 23.5 percent.

The results confirmed the seemingly inexorable ascent of the FN.

Le Pen has reaped the rewards of her efforts to "de-demonise" the party bequeathed by her former paratrooper father Jean-Marie Le Pen, but it retains a stridently anti-immigrant and often Islamophobic message that has fallen on fertile ground in a France shocked by the massacre of 130 people by jihadists in Paris last month.

"We told you so," was the response of the party to the carnage wrought by nine gunmen and suicide bombers, at least two of whom slipped into Europe posing as Syrian refugees.

Her campaign has exploited anger over the situation in Calais, where thousands of migrants are camping in squalid conditions in the hope of reaching Britain, winning her nearly half of first-round votes in the northern port.

Socialists and Republicans are divided on whether banding together to beat the FN is a good idea, aware such a move plays into the far-right narrative that the traditional parties are two sides of the same coin.

"The more we use this approach... the more we will undermine trust in democracy and increase the FN's score," said political analyst Joel Gombin.

Others have questioned the Left's moralising tone. Prime Minister Manuel Valls has called the FN a "fraud" that wants to return France to the "wars of religion".

He feels "no hesitation", he said, in urging voters to back the Republicans to keep the FN from power -- as they did in 2002 when voters flocked to Jacques Chirac in a presidential run-off against Jean-Marie Le Pen.

Sarkozy, who has been accused of mainstreaming FN ideas by flirting with their lines on immigration and Islam, has a taken a different tack.

He said a vote for the FN was "not immoral" but they were "people who have never run anything, have no plan, have no self-control, who would create chaos."

The FN has revelled in the desperation of their opponents.

"I think the French want to try out the National Front," Le Pen declared this week, adding that if elected she would run her region "until I am elected president of the republic."