Hundreds rally against Donald Trump outside his NYC hotel: 'We are asking for basic respect and dignity' 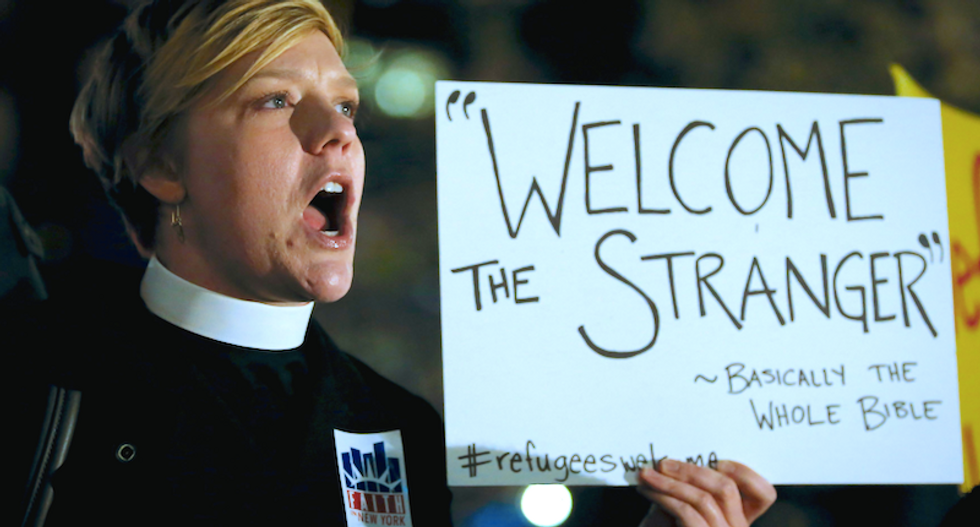 A woman shouts slogans as she takes part in an anti-Donald Trump, pro-immigration protest in the Manhattan borough of New York December 10, 2015. (REUTERS/Carlo Allegri)

Hundreds of activists rallied on Thursday in front of Donald Trump's hotel in midtown New York City to condemn the Republican 2016 presidential candidate’s call to bar Muslims temporarily from entering the United States.

“We are not asking for any favors,” Linda Sarsour of the Arab American Association of New York told the crowd. “We are asking for the basic respect and dignity that we all deserve here in the United States of America.”

Trump's statement, which has drawn widespread criticism both at home and abroad, came in response to the deadly shootings in San Bernardino, California, last week, in which a married Muslim couple described as "radicalized" by authorities killed 14 people. On Thursday, Trump canceled a planned trip to Israel amid the uproar.

Some protesters said Trump’s comments, while more explicit, were not that far removed from statements by other politicians calling for restrictions on Syrian refugees who want to settle in the United States.

Others warned that Trump's divisive remarks were only intensifying a wave of Islamophobia.

Some Muslims at the rally said they feared attacks and discrimination would increase in the wake of the shootings, much as they did following the Sept. 11, 2001, attacks by al Qaeda.

Amira Kariem, 16, said her father forced her mother to stop wearing her head scarf for two weeks following those attacks, while her friend, Iman Sahel, 17, said her aunt was pushed to the ground.

"There are people who are just like him," Sahel said of Trump.

A lone Trump supporter stood off to the side of the protest, holding up signs that said "We Want Trump" and "No More Syrians."

The rally's speakers included Hussam Al Roustom, a Syrian refugee who arrived in New Jersey four months ago after fleeing the war-torn city of Homs.

"Islam is the religion of peace," he said. "Islam is not terrorism."