WATCH: NYC cops beat up black man inside his own home for walking his dog off leash 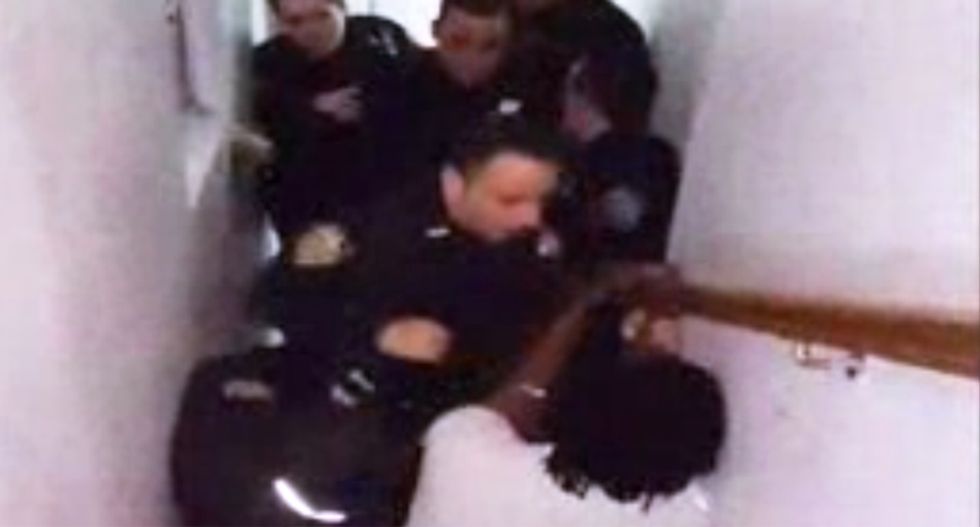 In dramatic footage provided to the New York Daily News, a Queens man had his head repeatedly bashed into a wall and punched during a dog walking incident that escalated out of control.

According to 25-year-old college student Nicholson Gregoire, he had just exited his home to walk his 5-month-old pit bull when police noticed the dog was not on a leash.

After he was asked for his ID, Gregoire reentered his home to retrieve it only to have the police repeatedly ring his door -- causing the young man's grandfather to open the door to them. After refusing to give the cops his ID -- despite his grandfather's pleas -- the two cops rushed Gregoire and tackled him, setting off a wrestling match that was recorded by Gregoire's girlfriend.

According to Gregoire’s attorney, Mark Crawford, “The police are alleging that my client answered the door and dragged them inside, to justify coming into the house. They had no basis to enter the premises."

In the video, Gregoire can be seen fighting off the police while holding his ID in the air, saying, "Here it is."

At that point it was too late, as the officers can be heard yelling, "Stop resisting," a sentiment echoed by Gregoire's girlfriend while she also pleaded with the two cops to stop.

“I’ve been watching the video over and over. I didn’t use any foul language. I don’t think I should have been arrested in my home for walking my dog. I was scared for my life. They have the guns,” Gregoire explained.

At one point, Gregoire put one officer in a chokehold, before he was wrestled down a staircase where the officers are joined by over a dozen other cops who attempt to pile on him.

As Gregoire holds onto a banister, one officer can be seen punching him repeatedly in the head before slamming his head into the wall, causing a fist-sized hole.

Gregoire was eventually subdued and taken into custody, charged with resisting arrest and assaulting a police officer.

Watch the video below from Nicholson Gregoire's Facebook page:

SHOCK VIDEO: New York Police BREAK INTO Man's Home . . . With NO WARRANT . . . And Then BRUTALIZE HIM!!! (How Is Something Like This LEGAL . . . In AMERICA??) #BlackLivesMatter

Posted by Mediatakeout on Wednesday, December 23, 2015