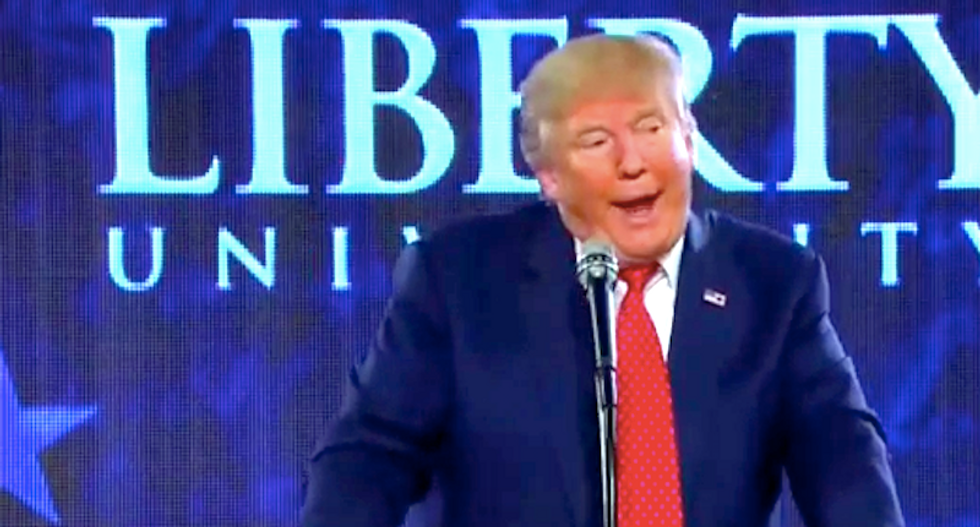 GOP front runner Donald Trump has been accused of racism in the past, but on Friday morning, Trump retweeted a white supremacist website promoting Adolf Hitler.

The tweet was a jab at rival, Florida Gov. Jeb Bush and showed him looking down-and-out, holding a "Vote Trump" sign.

The tweet originated from an account called @WhiteGenocideTM, which is promoting a pro-Hitler movie called, The Greatest Story Never Told. The trailer for the film calls Hitler the "saviour of Europe." The website also includes an interview with Holocaust-denier Ursula Haverbeck.

One of the many troubling tweets from the account is an animated picture of Donald Trump dressed as a Nazi, about to gas potential Democratic rival Sen. Bernie Sanders. Sanders is Jewish.

The Twitter account is littered with anti-Semitic and anti-Muslim rhetoric and lists its location as "Jewmerica." Its "pinned" or featured tweet shows a man saying he is Jewish, with a yellow Star of David with the word "Jude" added on.

Trump tweeted the image of Bush with the racist twitter handle to his nearly 6 million followers Friday morning.  It's not the first time Trump has been associated with the fascist leader of Nazi Germany who was responsible for genocide against millions of Jewish people and other groups.

Last month, a Trump fan page attributed a quote by Hitler to Trump, inscribing the words, "As a Christian I have no duty to allow myself to be cheated, but I have the duty to be a fighter for truth and justice" on the image of Trump. The sentence was part of a 1922 speech by Hitler in Munich.

Long before Trump hit the campaign trail, his ex-wife, Ivana, told Vanity Fair in a 1990 interview that Trump kept a collection of Hitler's speeches on his night stand by his bed.