Michigan Gov. Snyder admits Flint is his ‘Katrina’ — and Twitter pounds the hell out of him 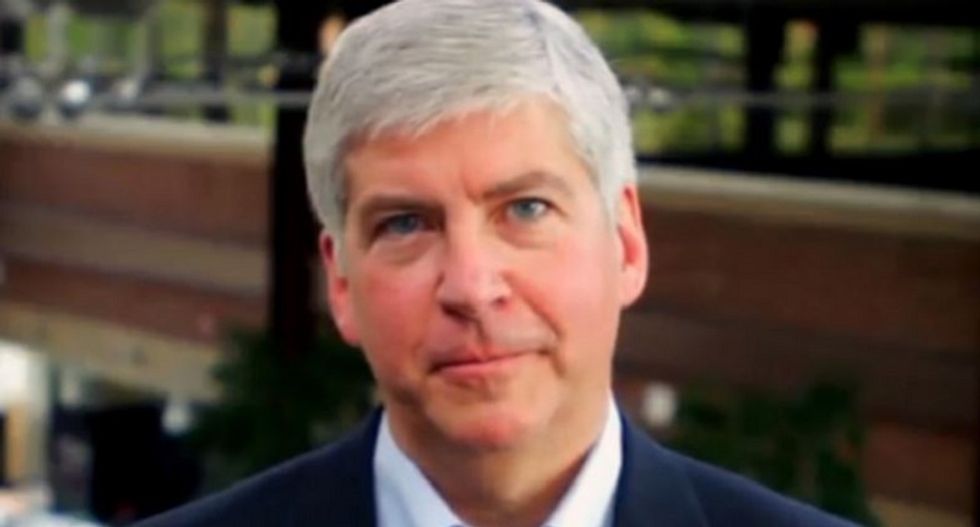 Calling the water crisis in Flint a "disaster," Michigan Gov. Rick Snyder took responsibility for not following up on complaints on the poisoned water and admitted it was his "Katrina" --  shorthand for a complete political failure -- reports the National Journal.

In an interview on Monday, Snyder admitted that his administration was aware that the state De­part­ment of En­vir­on­ment­al Qual­ity was mishandling the Flint water crisis in mid-2015, with his own chief of staff sending off an email complaining about it.

Snyder stated that he failed to press the issue with subordinates that ultimately led to the death of 10 and poisoned thousands of residents of the city.

While laying some of the blame with the EPA, Snyder added, "The checks and bal­ances that the­or­et­ic­ally could have been there didn’t work. This is a mess. I mean, I feel ter­rible about all this hap­pen­ing. And that’s why I’m work­ing hard to do everything I can to re­pair the dam­age and then ac­tu­ally work to strengthen Flint and the cit­izens."

Asked if he agreed with critics who were calling Flint his Katrina moment, the governor agreed, saying, "It’s a dis­aster."

Snyder has been under fire for his leadership during the crisis, with both Hillary Clinton and Bernie Sanders slamming him at the conclusion of Sunday night's Democratic debate. Prior to the debate, Sanders had already called upon Snyder to resign, saying "There are no excuses."

Criticism of the Michigan governor reached a crescendo that evening when Snyder tweeted on his Twitter account -- under the Twitter handle: "@onetoughnerd" -- "Political statements and finger pointing from political candidates only distract from solving the Flint water crisis."

Commenters responded to the tweet, telling the governor he should not only resign but that he should be in prison.

Mocking his @onetoughnerd Twitter name, actor Mark Ruffalo tweeted: "He's going to get a lot tougher if he ends up in prison."

Other were not so nice. A sampling below:

Oh @onetoughnerd they are all that is helping to solve the crisis you created. Thank President Obama and be quiet for God's sake.
— Joan Walsh (@Joan Walsh) 1453090673.0

@onetoughnerd @jaketapper Are you under criminal investigation yet? That's where the focus needs to be.
— Ricardo Harvin (@Ricardo Harvin) 1453090450.0

@onetoughnerd You should be forced to butt-chug a gallon of that water on national television.
— matt christman (@matt christman) 1453091132.0