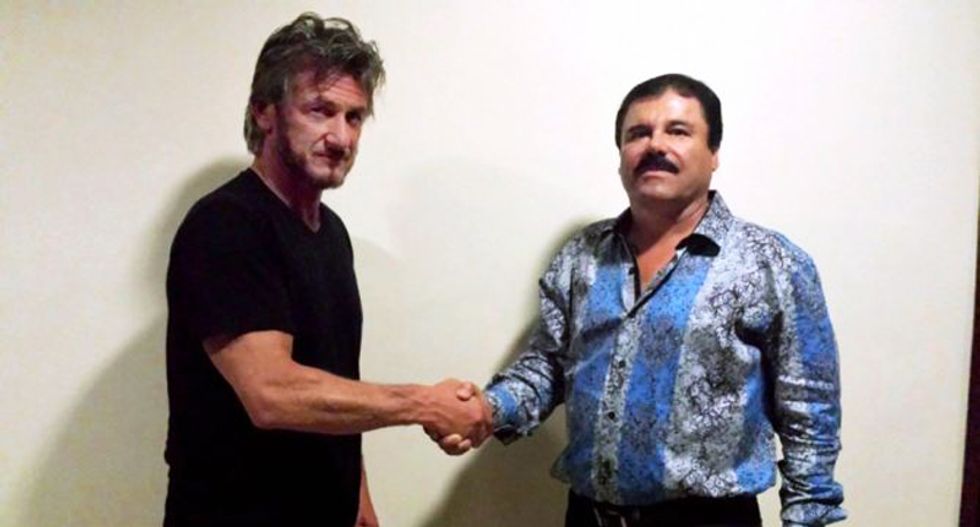 No one expected Sean Penn to interview the world's most wanted drug kingpin after he escaped prison for the second time. But three months before El Chapo was recaptured by Mexican Marines, he was hanging out with the actor in a jungle for a lengthy Rolling Stone interview. In an interesting turn of events, Penn's discussion with El Chapo has been criticized as "unethical" by politicians and journalists who couldn't score or stomach the interview.

At the heart of the issue is how Penn allowed the violent head of the Sinaloa drug cartel to sign off on the final Rolling Stone piece, which certainly does breach journalistic ethics. One rule of journalism is to ensure that the subject being reported on doesn't have any sway or influence on the final product, and letting El Chapo decide what can and can't be published defeats the true purpose of doing the interview in the first place.

“Allowing any source control over a story’s content is inexcusable," Andrew Seaman, chair of the Society of Professional Journalist’s ethics committee wrote in a blog post. "The practice of pre-approval discredits the entire story. The writer, who in this case is an actor and activist, may write the story in a more favorable light and omit unflattering facts in an attempt to not be rejected.”

Seaman does make a good point. But with the daily ethics violations committed by people who were actually trained to be journalists, it does seem strange that all of a sudden members of the media want to hash out what's acceptable in reporting the news or conducting interviews.

Private interests often have a great deal of influence in U.S. news, and often times corrupt the integrity of media in the country. Often times journalists will be overly kind or biased in favor of the advertisers who fund their outlets. Very rarely does that sort of corruption rile up members of the media.

A few years ago, journalist David Sirota broke a news story regarding PBS's negative coverage of pensions in a two-year news series called "Pension Peril." Through Sirota's impressive investigative work, it was discovered that PBS solicited donations from billionaire John Arnold to produce the series. Arnold has spent millions of his own money to push an agenda to slash the retirement benefits of public employees.

Arnold gave the media outlet a massive $3.5 million donation, and PBS knew that he would be willing to spend the cash if their reporting was favorable to his political agenda. After Sirota's exposé, PBS returned the money to Arnold.

That type of ethical breach occurs more often in journalism than the media would care to admit, but no one in the establishment ever speaks out against it. Sirota's investigation didn't get much play in the mainstream media, and the only time journalistic integrity is questioned is when establishment journalists don't get their way...like an interview with El Chapo.