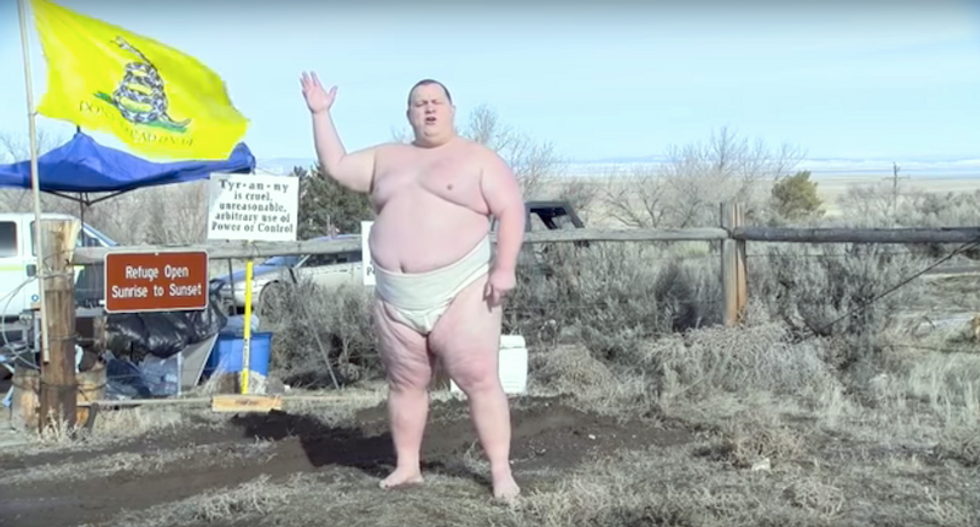 An Idaho man who has joined the armed occupation of a federal nature preserve challenged New Jersey Gov. Chris Christie to a sumo wrestling match after the Republican presidential candidate criticized the militants.

Kelly Gneiting wore a sumo loincloth, or mawashi, and stood before a Gadsden flag set up at the Malheur National Wildlife Preserve to record a short video that was posted Saturday on YouTube.

Gneitling, of Rigby, jokingly referred to himself as Christie's older brother to taunt the governor -- who had angered militants by saying he believed law enforcement should disperse to end their three-week-long occupation of federal property.

"You know what I want to see? I want to see you come over here and disperse me, your older brother, in the dojo," Gneiting said, slapping his bare thighs and reminiscing about rolling his "brother" down the stairs in a sleeping bag. "Woo-hoo, little Christie!"

Gneiting, a Mormon who spent three days with Ammon Bundy and the other militants, gripped his substantial girth and said he and the governor shared a similar body frame, although he suggested Christie might be even larger.

He challenged the presidential candidate to "throw on a diaper" and "go to war over the Constitution."

"Bring that big ol' belly over here, and let's slap bellies," he said. "I'm talking about 10 bouts -- you win one out of those 10, and me and these other good, constitutional folk -- I'm going to make them sumo wrestlers, too -- all these good, constitutional folk, we'll disperse. But if I win all 10, I get to roll you down the stairs in that sleeping bag again. Woo-hoo, little Chrissy!"