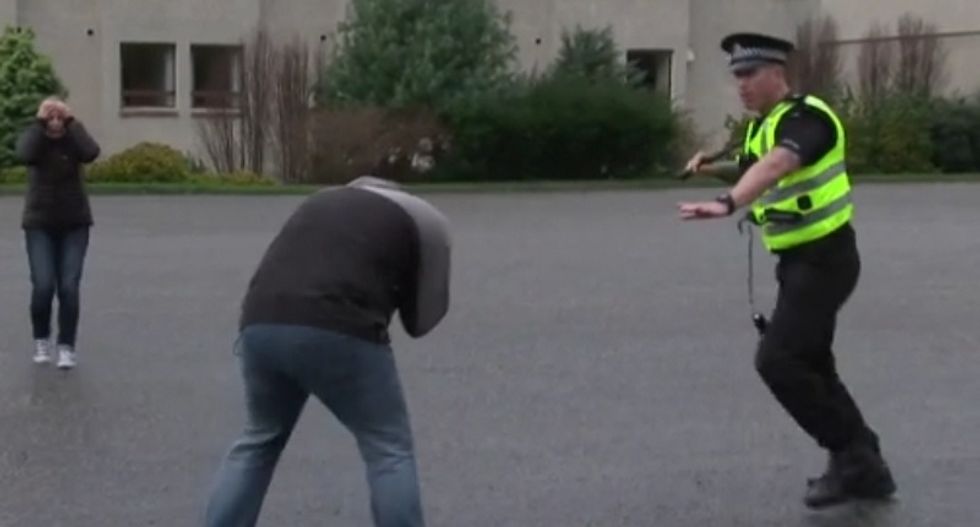 Last year, American police killed between 1,200 and 1,300 people, depending on which database one looks at. Compare that to two people shot in the last decade by Scottish police.

There are some obvious differences between the United States and the Scotland. For instance, the U.S. has a far larger population of more than 300 million people -- and nearly as many guns in circulation, Sky News points out. While police in the United Kingdom are generally unarmed, American police are.

Still, many of the people killed by police last year were unarmed, Sky News reports, while some were armed with objects like knifes or rocks. In an effort to seek a resolution to the issue of lethal force, American police visited Scottish officers to see what they could learn.

Chuck Wexler, a former hostage negotiator for the Boston Police Department, explained how American police would likely respond when dealing with someone holding a rock.

"You're going to kill someone for throwing a rock. That's what you're gonna do," Wexler explained. "How would society over here think about you shooting someone with a rock? They would not accept it."

The American police hailed from departments including the New York and Los Angeles police departments. Sky News followed them on their four-day visit, while they watched Scottish police take alternate tactics to avoid a deadly confrontation.

"The American style of policing, it's very authoritative," Scots police Sgt Jim Young told Sky News. "There's a difference of going in, straight up at this level, whereby you're ordering people, you're shouting at them. You can't go anywhere after that. But if you start down low you can adjust your communications to suit."

Shootings and fatal use of force in the U.S. by police of unarmed people, have resulted in widespread anger and protests. In 2014, anger over police violence, particularly against communities of color, boiled over when Ferguson police officer Darren Wilson shot and killed unarmed teen Mike Brown. Brown's killing resulted in civil unrest and illustrated the division between a militarized police force and American civilians.

"It's about time that we step up and this is our chance," Wexler told Sky News. "It's a crisis but it's also our chance to do the right thing."

Watch a clip from a training session, as posted, here:

‘Everything has been a lie’: Christian Walker drops damning new video blasting his father’s ‘lies’ over abortion

Christian Walker, the son of the Republican Party of Georgia's nominee to be a U.S. Senator is out with a new video Tuesday morning blasting his father, Herschel Walker, and Republicans who he says knew about his philandering father's past and suggesting they even called him telling him it's important for the party that he win, despite the latest bombshell news.

Monday evening The Daily Beast reported Herschel Walker, the former NFL star running for Senate as a "pro-life" candidate who supports zero exceptions for abortion, paid for an abortion for his girlfriend.