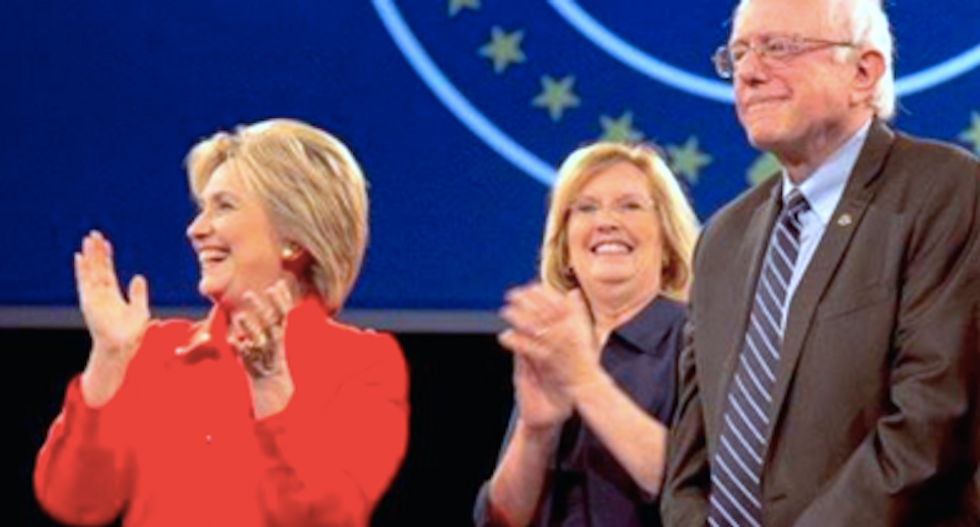 The state Democratic Party chair who refuses to release raw vote totals from Monday's razor-thin Iowa caucuses is a longtime Hillary Clinton supporter who even drives a car that officially displays her support for the presidential candidate.

Some Democrats have raised concerns that McGuire, who has been involved in Iowa politics for more than 20 years, is manipulating the state's Democratic Party to favor Clinton over her challenger, Sen. Bernie Sanders (D-VT).

McGuire, who was tapped to lead the state party in January 2015, ran for lieutenant governor in 2006, she's been mentioned as a possible congressional candidate and many Democrats expect her to run for governor in 2018.

She's known as a strong fundraiser -- and she's put that skill to work for Clinton in the past.

McGuire served on Clinton's National Council of Civic Leaders and the Women’s Leadership Council for Team Hillary back in 2007, and she hosted a fundraiser for the candidate that year in her own home.

The 58-year-old physician, who is president and chief operating officer of Median Health Plan, vowed she would remain neutral during Iowa's first-in-the-nation primary.

But the Des Moines Register, the state's top newspaper, has called for a "complete audit" of the Democratic Party caucuses after some of its editorial board members reported "chaos" and irregularities at polling places.

The Sanders campaign has called on McGuire to release the raw voting data, and staffers have been rechecking the results precinct by precinct -- where they have reported inconsistencies.

They want McGuire to release the math sheets or other paperwork filled out by precinct chairs and then turned over to the state party.

The Register faulted McGuire for refusing to do that, instead citing party tradition.

"McGuire knows what’s at stake," the Register wrote. "Her actions only confirm the suspicions, wild as they might be, of Sanders supporters. Their candidate, after all, is opposed by the party establishment — and wasn’t even a Democrat a few months ago."

The (Cedar Rapids) Gazette also called on the state's Democratic Party to "clean house" and make significant changes to its caucus process.

"The caucus system is dependent on the political parties, beholden to their ability to kibosh speculation of candidate favoritism," wrote Gazette columnist Lynda Waddington. "Iowa Democrats failed the test, placing an undue shadow on what should be the celebration of an ongoing spirited contest."

Edit: This story initially reported that McGuire had painted over the "R" on her license plate because Clinton isn't using her maiden name, Rodham, in this campaign. That reference has been removed because it could not be independently verified. A reference to the Bleeding Heartland blog has also been removed.