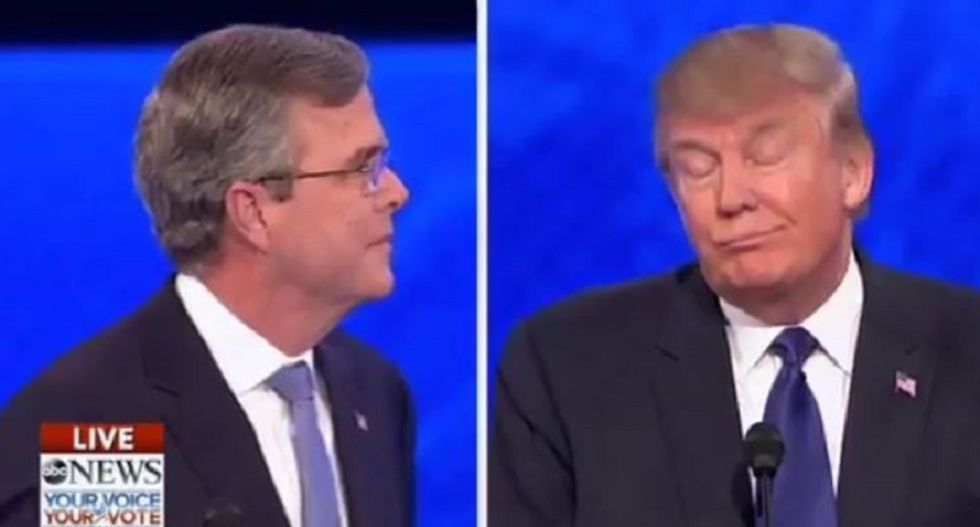 Donald Trump was booed during the GOP debate on Saturday in New Hampshire after he ordered rival, former Florida Gov. Jeb Bush, to be quiet.

Real estate mogul Trump was asked by debate moderators whether he thought eminent domain, which allows private property to be taken to make way for development, was a good thing. He answered he thought it was necessary. Bush then criticized Trump for taking the property of an elderly woman.

"He wants to be a tough guy," Trump said, of Bush.

"How tough is it to take property from an elderly woman," Bush interjected.

The audience then began booing Trump.

Trump then said the audience was made up of Bush's donors and special interest backers, which Bush laughed off.

Transcript of the entire exchange, as provided by ABC, is below the video.

MCELVEEN: Thank you, David. And good evening, candidates. Mr. Trump, you have said, quote, "I love eminent domain" which is the seizure of private property for the sake of the greater good theoretically. You tried to use the measure in business endeavors, you've said you'd support its use for the Keystone Pipeline project.

Here in New Hampshire, a project, though, known as the Northern pass would bring hydro-electric power from Canada into the Northeastern grid. Do you see eminent domain as an appropriate tool to get that done?

And what a lot of people don't know because they were all saying, oh, you're going to take their property. When somebody -- when eminent domain is used on somebody's property, that person gets a fortune. They get at least fair market value, and if they are smart, they'll get two or three times the value of their property. But without eminent domain, you don't have roads, highways, schools, bridges or anything.

MCELVEEN: So would that be yes on the Northern Pass project?

TRUMP: Jeb wants to be -- he wants to be a tough guy tonight. I didn't take the property.

BUSH: And the net result was -- you tried.

TRUMP: I didn't take the property.

BUSH: And you lost in the court.

TRUMP: The woman ultimately didn't want to do that. I walked away.

BUSH: That is not true. And the simple fact is to turn this into a limousine parking lot for his casinos is a not public use.

And in Florida, based on what we did, we made that impossible. It is part of our Constitution. That's the better approach. That is the conservative approach.

BUSH: How tough it is to take away property from an elderly woman?

BUSH: How tough it is to take away a property from an elderly woman?

... that's all of his donors and special interests out there.

So -- it's what it is. That's what -- and by the way, let me just tell you, we needed tickets. You can't get them. You know who has the tickets for the -- I'm talking about, to the television audience? Donors, special interests, the people that are putting up the money.

That's who it is. The RNC told us. We have all donors in the audience. And the reason they're not loving me...

BUSH: I consider it a public use.

Do you consider the Keystone pipeline private?

TRUMP: Is it public or private?

TRUMP: No, it's a private job.

BUSH: It's a public use.

TRUMP: It's a private job.

TRUMP: You wouldn't have the Keystone pipeline that you want so badly without eminent domain.