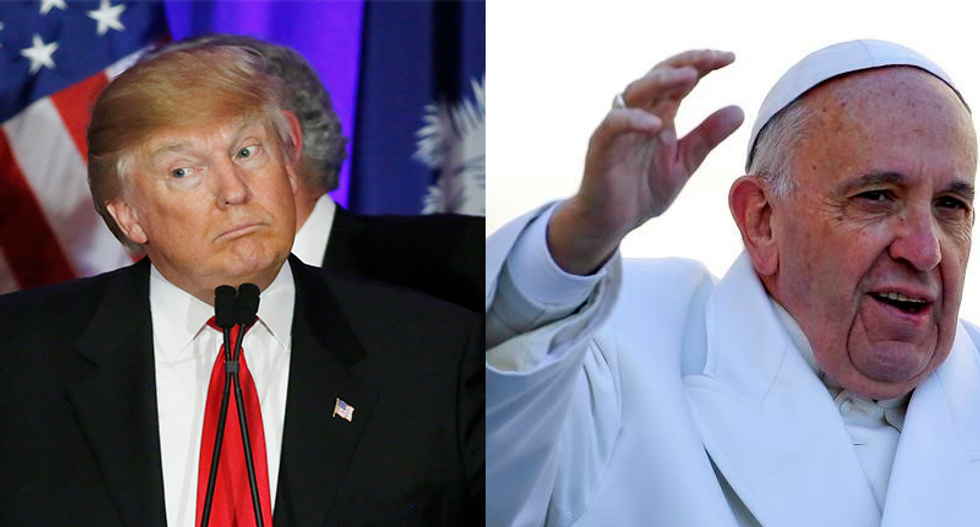 U.S. Catholics voiced support for Pope Francis on Sunday after he criticized Donald Trump's immigration stance as "not Christian," but many interviewed by Reuters said the controversy would not necessarily sour them on the Republican presidential contender.

The pontiff injected himself into the U.S. campaign during a conversation with reporters on his flight home from Mexico on Thursday. In his comments, Francis disparaged Trump's vow to build a wall along the southern U.S. border to keep out illegal immigrants.

A sampling of opinion from people before and after Sunday Mass suggested that many Catholics saw the pope's comments as well-intentioned and grounded in a moral worldview. Many said Francis, who has become a champion of inclusion in his three-year tenure as head of the Roman Catholic Church, was right to insist on the humane treatment of all immigrants.

Even so, most of those interviewed in Boston and New York would not rule out voting for Trump based on what Francis said. About 21 percent of the U.S. population identifies as Catholic.

"I agree with the pope as far as being a true Christian, you accept everybody," said Paul Nappi, 65, outside Our Lady of Mount Carmel in Brooklyn, New York. "I happen to like Trump but I don't know if he's literally about building walls or that's just a figure of speech."

Many churchgoers said the media unfairly whipped up the controversy to goad the pope and Trump into a fight days before Saturday's South Carolina Republican primary. Trump's victory there made the billionaire real estate mogul the clear front-runner for his party's nomination for the Nov. 8 election to succeed Democratic President Barack Obama.

"It's very treacherous for the media to ask those questions to the pope because they were questions inspired by the media itself," said Catalina Carmona, 31, a lawyer visiting New York from Colombia. "He was put in a difficult situation and he said what a leader in his position would be able to say."

Francis never directly criticized Trump or mentioned him by name when he told reporters: "A person who thinks only about building walls, wherever they may be, and not building bridges, is not Christian."

Carol Menkiti, 76, of Somerville, Massachusetts, said of the pope's remarks: "I felt he was using an analogy that's often used. I love the pope."

"I don't think he comments on politics, but he talks about the human condition," she said after attending Mass at St. Paul's Church in Cambridge, Massachusetts.

A spokesman for Francis sought on Friday to tone down the controversy, insisting the pontiff was not making a personal attack on Trump or any statement about the U.S. election.

After initially saying it was "disgraceful" for the pope to judge another's faith in God, the blunt-spoken Trump said Francis was "a nice man" who was probably misinterpreted by the media.

But from the pulpit of St. Paul's, the Rev. James Flavin did not shy away from the issue. In his Sunday sermon, he linked the pope's remarks about "walls" to many of the social justice themes he has sounded since his papacy began in March 2013.

"The pope denounced a world divided by walls," Flavin said. "He's challenging us to change the world through our imitation of Christ."

How much the pope's views will influence U.S. Catholics in the voting booth is an open question, but parishioners suggested a muted impact at best.

While most of those interviewed said they respected the pope's moral authority, Joe Ruggiero, 70, thought Francis sometimes "gets a little carried away" with what he characterized as a "basically socialist" point of view.

"Catholics believe the pope is infallible in issues of faith, not issues of politics," Ruggiero said outside the Cathedral of the Holy Cross in Boston.

Nappi said the pope's influence over Catholics would not necessarily be the sole determining factor in how Catholics vote.

"I think anytime the pope says something, of course it'll have an affect on Catholic voters," he said. "Me personally, I like to weigh all the issues before I make a definitive opinion one way or another."