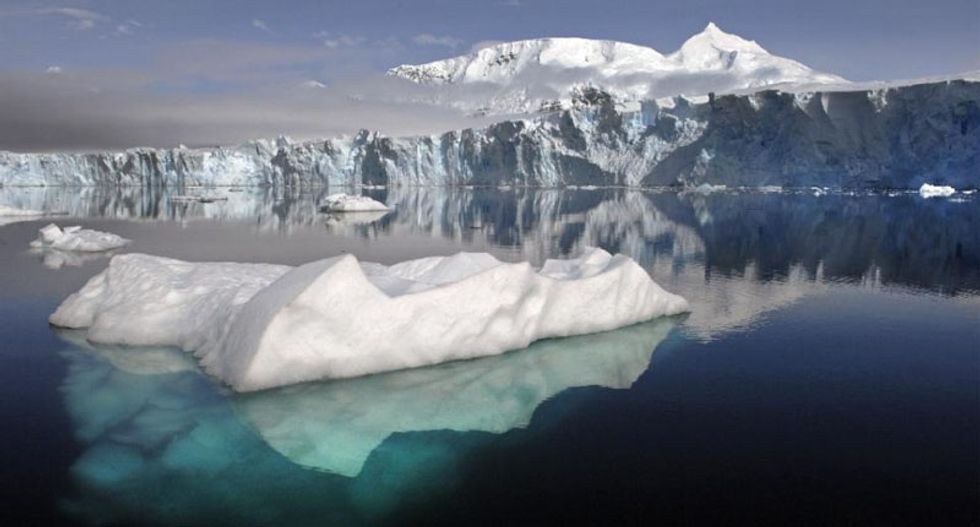 This image obtained from NASA on November 14, 2012 shows a view of Sheldon Glacier with Mount Barre in the background, seen from Ryder Bay near Rothera Research Station, Adelaide Island, Antarctica (AFP Photo/)

A record number of Americans believe global warming will pose a threat to their way of life, new polling data shows, amid strengthening public acceptance that rising temperatures are being driven by human activity.

“I think a shift in public opinion and consciousness has been underway for several years now,” Michael Mann , a prominent climate scientist at Pennsylvania State University, told the Guardian.

A spokesman for 350 Action, the political arm of climate activist group 350.org, said meanwhile that politicians who cast doubt on climate science would soon have to take such polling into account. Republicans, he said, “are going to be screwed if they don’t change their tune”.

Polling firm Gallup, which has been tracking public sentiment on the topic annually since 1997, found that 41% of US adults feel warming will pose a “serious threat” to them during their lifetimes. This is the highest level recorded by Gallup, a 4% increase on 2015.

A total of 64% of those polled said they worried about global warming a “great deal” or a “fair amount”, the highest level of recorded concern since 2008. Just 36% of Americans said they did not fret about it, or only worried a little.

The results show a solidifying belief that changes in the climate are under way, with 59% of people thinking so. A record 65% of Americans said global warming was down to greenhouse gases released by human activity – a 10% leap on last year.

Just 31% said the warming was due to natural causes, the lowest level of such skepticism in 15 years. The March polling involved more than 1,000 adults in all 50 states.

“I suspect it is a confluence of multiple factors,” said Mann. “The overall warmth in recent years here in the US, Europe and worldwide is part of it.

“But so too are the increasing number of destructive extreme weather events – floods, droughts, massive wildfires, extreme heat, unprecedented hurricanes … This puts a human face on the issue of climate change.”

Climate change denial is simply no longer plausible, and the American people are recognizing that

Strikingly, concern over global warming has grown across the political divide, with 9% more Republicans saying they worry about the issue “a great deal” compared to last year.

There remains a partisan divide, however, with just 35% of Republicans blaming human activity for global warming, compared to 85% of Democrats. Among independents, 68% accept humans are the main cause of warming, with 64% saying they worry a lot about the topic.

The surge in public concern over rising temperatures following an abnormally warm winter in the US and the historic Paris climate deal in December , in which nearly 200 nations agreed to curb their emissions in order to avoid dangerous sea level rises, droughts, extreme weather events and food insecurity.

The failed Copenhagen climate talks of 2009 , along with with what has been called a “constant barrage” of climate science denial in the media, had made the American public increasingly skeptical of the issue. Polling by Gallup from 2014 found that more than 40% of Americans felt that the seriousness of global warming was exaggerated by the media.

But climate campaigners claim the sheer weight of evidence of a warming world is now beginning to overwhelm the messages of doubt put forward by fossil fuel-aligned groups such as the Heartland Institute and conservative media outlets.

Mann said climate scientists were doing well to get their findings heard “despite the fierce headwind of a millions of dollars fossil fuel-industry funded disinformation campaign we have been fighting for years”.

“I also think that the profound impacts that climate change is already having and which people are experiencing, has impaired the climate change disinformation machine,” he said. “Climate change denial is simply no longer plausible, and the American people are recognizing that.”

February smashed a century of monthly global temperature records by a “stunning” margin, according to data released by Nasa this week. On Thursday, the National Oceanic and Atmospheric Administration said the US has just experienced its warmest winter on record, with scientists calling the recent heat “staggering” and similar to “something out of a sci-fi movie.”

The warmth, aided by a strong El Niño event, has essentially robbed the Arctic of its winter , reducing ice thickness. In Washington DC, pink cherry blossoms are blooming unusually early ; heat sucked up by the oceans is causing havoc for wildlife off the west coast.

Last year was the warmest year on record globally ; scientists forecast this record to fall again in 2016. Despite this, climate change has barely featured in the Republican presidential debates. Frontrunner Donald Trump has derided the science as “bullshit” and called climate change a “hoax” invented by the Chinese.

“Sadly, I think that the current Republican party including their likely presidential nominee are entrenched in their climate change denialism,” Mann said. “Only a major political shakeup and realignment is likely to change that. But we might very well see that realignment in this election.”

A spokesman for 350 Action said: “Climate change is no longer a distant threat, but a clear and present danger. People can see the changes underway right in their neighborhood, whether it’s a forest fire bearing down on their backyard or rising seas lapping at their doorstep.

“I think we’re reaching a tipping point where that concern manifests into an even stronger demand for immediate action from politicians. Republicans are going to be screwed if they don’t change their tune.”