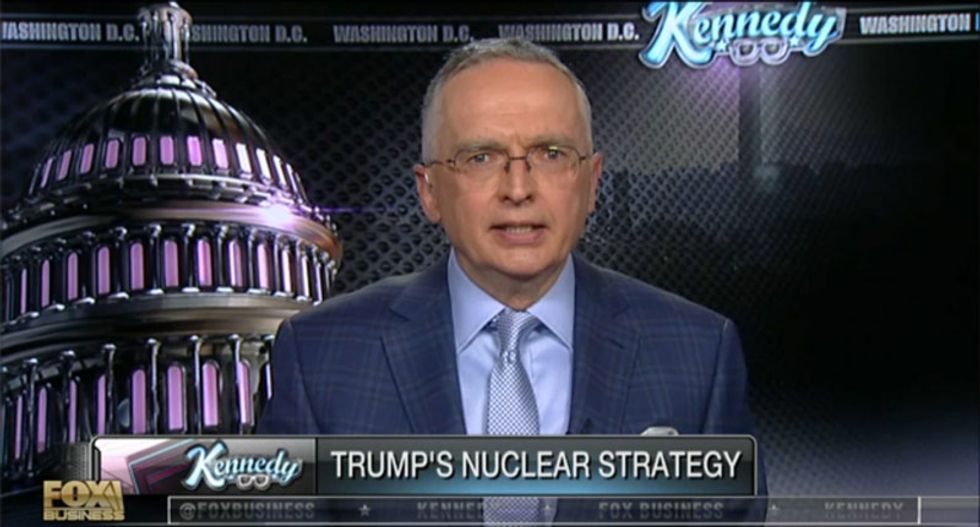 Fox News military analyst Lt. Col. Ralph Peters isn't someone who would ever be mistaken for liberal. But even this right-wing pundit has reached his limit on nonsense coming from the presidential field.

Peters appeared on the Fox Business Network's late night Kennedy show, hosted by the mononymous former MTV veejay and now conservative talker, who kicked off the discussion starting with Donald Trump's casual and noncommittal response when he was asked whether he would use tactical nuclear weapons against ISIS.

"None of the political wannabes, none of the aspirants have done their homework. None served in the military — they're all too important — but at least do your homework, guys," Peters said. "Now if you want to use a nuclear weapon on Islamic State, tell me: What's the target? What's the operational advantage? How would you deal with the ramifications for allies? It's the kind of thing people throw out there, and it's just goofy loose talk."

And then Peters even let another GOP candidate really have it: "I mean, when Ted Cruz talks about 'carpet bombing,' I get the sense he thinks it's dropping carpets out of an airplane. You've got to know what the basic terms mean."

A laughing Kennedy responded: "I've got all these remnants from when I redid my guest house! I'll just drop 'em on ISIS!"

"Exactly, Carpet Warehouse," Peters said. "But seriously, there was one point where I really got angry. I don't take this stuff home with me, and I'm pretty balanced — really.

"But when Trump was challenged about the military and him giving an unlawful order, and the military not obeying it, he said, 'Oh, they'll obey it.' Well no, Mr. Trump — our military takes an oath to support and defend the Constitution of the United States. They obey the lawful orders of the Commander-in-Chief. But if the Commander-in-Chief, the president, ever gives an order that conflicts with the Constitution, the Constitution wins — hands down, every time. So I just wish these guys would — you know, come on, if you won't do the homework, guys, get your staffers to do some for you."