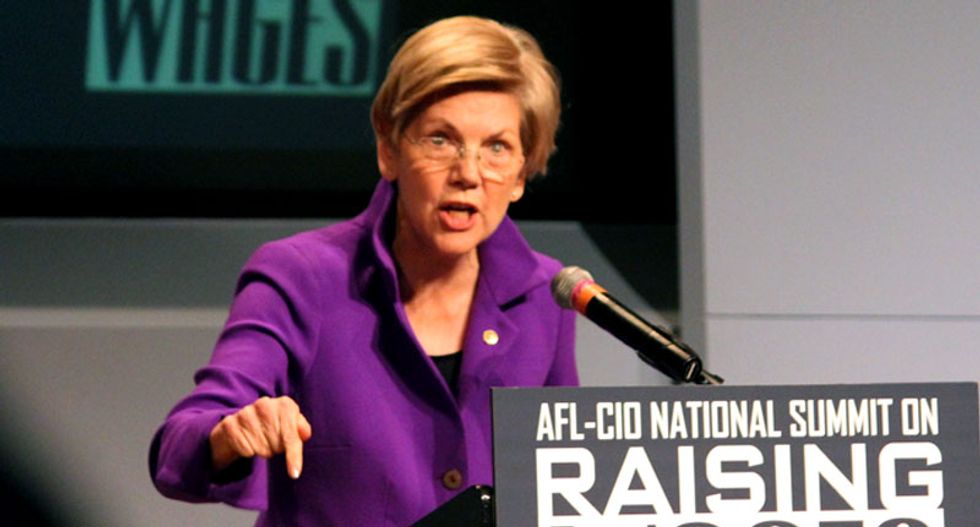 Massachusetts Sen. Elizabeth Warren is defending Bernie Sanders’ decision to keep campaigning for the Democratic presidential nomination and calling out Donald Trump for being the worst kind of predatory capitalist.

Warren spoke to reporters after visiting a community health center in suburban Boston and made the following six points about Sanders and Trump, which were quickly picked up by Associated Press.

1. Sanders is good for Democrats and the country. “He’s out there. He fights from the heart. This is who Bernie is,” Warren said. “He has put the right issues on the table both for the Democratic Party and for the country in general, so I’m still cheering Bernie on.”

2. Trump’s riches come from exploiting others’ pain. Warren said Trump’s fortune was acquired “by cheating people, by defrauding people, and by skipping out on paying his creditors through Chapter 11” bankruptcy protection.

3. Trump’s primary qualification is a big lie. “Donald Trump claims that the reason he’s qualified to be president of the United States is that he is a very, very, very successful businessman,” Warren said. “Donald Trump is not a great business success and it’s time he’s called on it.”

4. Trump quotes fascists and thinks that's just fine.  Last month, Trump recited a quote from Italian fascist dictator Benito Mussolini, “It is better to live one day as a lion than 100 years as a sheep,” and said he didn’t care who said it because he liked it. “He’s the one who quotes Mussolini,” she said. “That is really scary and the American people should pay very close attention.”

5. There is no good Republican candidate. Warren talked about how debating Obamacare is but one example of how bad all of the Republican candidates are. “While the Democrats are saying, ‘Gee, is the right answer to improve the Affordable Care Act in the following six ways or go all the way to single payer?’—which is a good debate to have—the Republicans are saying they are going to repeal the Affordable Care Act and replace it with something they can’t quite describe,” she said.

6. Old GOP attacks on her won’t work. Warren said Trump’s attacks on her, which are recycling her 2012 GOP opponent’s claim that she does not have some Native American blood, were pathetic. “If Donald Trump thinks that by using Scott Brown’s hate-filled attacks on my family he’s going to shut me down then he better think again,” she said. “It didn’t work before and it’s not going to work now.”

Warren has not endorsed either Sanders or Clinton in the 2016 Democratic nominating contests. But her remarks this past week have prompted some commentators to speculate that should Sanders win the nomination, she would be an excellent running mate.

Warren's comments are also signaling that she is taking on a new role in the presidential campaign. On Monday, she slammed Trump in more detail on her Facebook page, but said Democrats need to take Trump’s candidacy seriously, because he could win and cause real harm.

“Let’s be honest—Donald Trump is a loser,” she wrote. “Count all his failed businesses. See how he kept his father’s empire afloat by cheating people with scams like Trump University and by using strategic corporate bankruptcy (excuse me, bankruptcies) to skip out on debt. Listen to the experts who’ve concluded he’s so bad at business that he might have more money today if he’d put his entire inheritance into an index fund and just left it alone.”

Warren continued, saying, “Trump seems to know he’s a loser. His embarrassing insecurities are on parade: petty bullying, attacks on women, cheap racism, and flagrant narcissism. But just because Trump is a loser everywhere else doesn’t mean he’ll lose this election. People have been underestimating his campaign for nearly a year—and it’s time to wake up.”

Warren said this election really matters—and that’s not a cliché. “Consider what hangs in the balance,” she said. “Affordable college. Accountability for Wall Street. Healthcare for millions of Americans. The Supreme Court. Big corporations and billionaires paying their fair share of taxes. Expanded Social Security. Investments in infrastructure and medical research and jobs right here in America. The chance to turn our back on the ugliness of hatred, sexism, racism and xenophobia. The chance to be a better people.”

Warren concluded that a Trump presidency could “tear apart an America that was built on values like decency, community, and concern for our neighbors.” She said, “Many of history’s worst authoritarians started out as losers—and Trump is a serious threat. The way I see it, it’s our job to make sure he ends this campaign every bit the loser that he started it.”