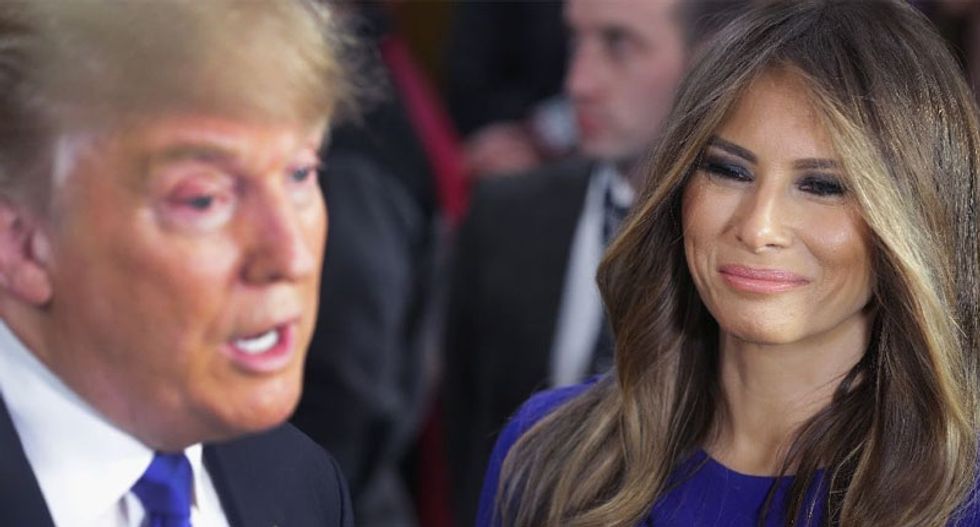 There's no evidence to support Donald Trump's claim that Ted Cruz played a role in a super PAC's attack on his wife.

But federal rules barring coordination between candidates and the super PACs that support them have been so rarely enforced that even if Trump were right, it's uncertain the Cruz campaign would be penalized.

"Meet Melania Trump. Your next first lady," the ad read. "Or, you could support Ted Cruz on Tuesday."

Trump accused Cruz, or his campaign, of buying the photo from the magazine and providing it to the PAC. Trump has offered nothing to back up the claim. The Cruz camp said it had no involvement in the ad. A representative for the PAC accused Trump of concocting a "weird conspiracy theory." And the original photographer denied giving approval for anyone but GQ to use the photo.

Suppose, though, that evidence does emerge to show a link. It would be up to the Federal Election Commission, which is supposed to police the conduct of campaigns and political action committees, to determine if it is illegal for a candidate to buy or produce content that a super PAC then parlays into an ad. If history is any guide, it's not a sure bet the FEC would do anything about it.

Super PACs are committees that can accept donations of any dollar amount and can promote candidates as long as they don't coordinate with their campaigns. Candidates can't solicit large donations for super PACs, and, before an election, they're not allowed to strategize with the groups on what kind of ads to craft or where to run them. If they could coordinate, dollar caps on contributions to candidates would become virtually meaningless.

But the definition of illegal coordination is narrow. A super PAC, for example, can host a fundraiser, and invite its favored candidate to headline the event and solicit money from guests. Candidates can also publicly post information about their ad buys, allowing super PACs to determine where the campaign might need reinforcements. In recent years, both parties were found to be releasing granular data about ads or polls on obscure Twitter feeds in apparent attempts to get around coordination rules.

That line gets blurrier when it comes to super PACs that repurpose content from campaigns. A number of candidates have posted hours of polished video footage of themselves online, where super PACs can grab clips to use in ads.

Daniel Weiner, an attorney at the Brennan Center for Justice at New York University law school, said candidates "laundering this stuff" by putting the content online and into the public sphere is "not a get out of jail free card." But, he said, it does help campaigns dodge liability -- whereas "if it's something the campaign sent directly (to the super PAC), that could be an indication they really wanted you to use it."

While advocates for stronger regulation have argued that sort of repurposing is illegal, the FEC's three Republican appointees (the commission is evenly divided by party) have typically forced an impasse on the issue, deeming relatively short snippets to be fair game.

Paul S. Ryan, an attorney at the Campaign Legal Center, a nonprofit that advocates for stronger campaign finance regulation, could only remember one instance when the FEC did take action on this front. Restore Our Future, a super PAC supporting 2012 Republican presidential candidate Mitt Romney, ran an ad almost identical to one run by the Romney campaign itself. One of the sole differences was the closing credit that disclosed who paid for it.

"The penalty was $50,000 and that came about four years later," Ryan said. "The fine was ridiculously small and it came too late."

While Ryan contends that it would be a clear violation if a candidate purchased a photo and provided it to a PAC as Trump alleges, he doubts that the FEC's Republicans, who advocate against the government encroaching on political speech, would see it that way. "They seem to bend over backwards to find no violations of law," Ryan said.

For one thing, Ryan said, the FEC could decide that even if the super PAC got the photo from the campaign, it operated within the law because it covered some portion of the original photo by adding embedded text and therefore showing less of the original content.

Weiner, a former attorney for a Democratic FEC commissioner, said he's also not confident the agency would take action.

It's been difficult for the commissioners to find common ground on many enforcement measures, Weiner said, because of partisan gridlock. While the three Republican appointees tend to want a narrow interpretation of what constitutes a violation of the rules, the three Democratic appointees have also hardened their positions. "If they make a small exception, allow a small loophole, they're worried a truck will be driven through it," Weiner said.

Eric Wang, a campaign finance attorney who formerly worked for a Republican FEC commissioner, said Congress designed the agency to be evenly split as a check on the over-regulation of political speech.

"I shy away from using the term gridlock," he said. "Gridlock suggests the agency is not functioning in a smooth manner or in the way it's supposed to function."

The FEC, Wang said, is operating just as it should.