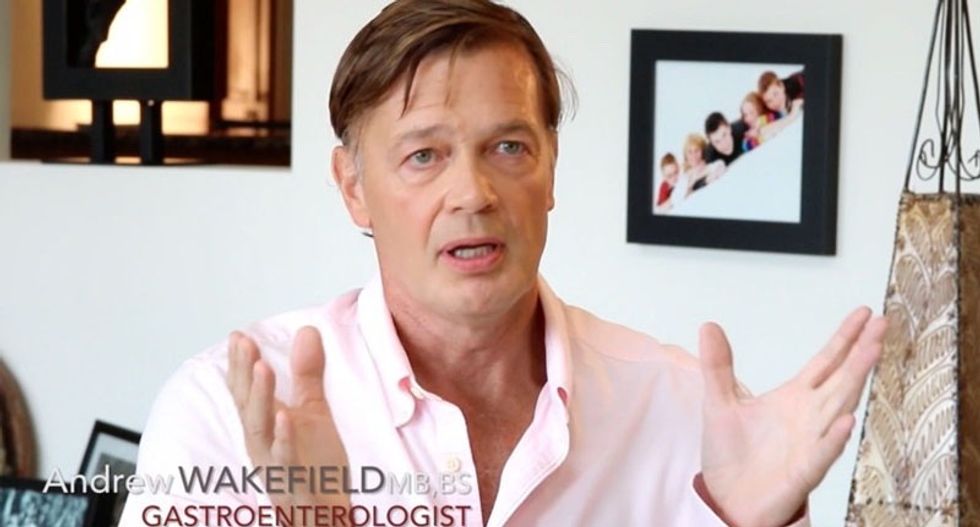 A film that asserts vaccines are linked to autism, despite broad scientific consensus to the contrary, had its first screening at New York City’s Angelika Film Center, just days after organizers of the Tribeca Film Festival dropped the film after outcry from concerned scientists.

Film-makers hope the first showing of Vaxxed: From Cover Up to Catastrophe will stir enough interest to warrant wider release of a film that has dismayed scientists and riled so-called anti-vaxxers. The film was screened despite a lack of scientific evidence to buttress its conclusions: that vaccines are dangerous and responsible for rising autism rates.

“We were in dialogue with the theater before Tribeca, trying to book [the Angelika] for June,” said Beth Portello, a spokesperson for Cinema Libre Studio, a small film distributor whose most recognizable hit was Outfoxed, a documentary about the Fox News empire. “And then the Tribeca situation happened, and on Monday we heard from the Angelika folks, and they said we’d be happy to run your film, would you like to do it Friday?”

Such was the run-up Vaxxed, which had its first screening at 11am on April Fool’s Day to a small audience of a few dozen, including vaccination advocates and anti-vaccination conspiracy theorists.

Portabello said that scientists’ outcry is unwarranted, since they hadn’t seen the film, characterizing it as a movie about, “safer vaccines,” not ,”anti-vaccine.”

But phrases such as “vaccine-damaged children” used throughout the film appear designed to raise parents’ suspicions, despite never identifying a specific biological mechanism through which the vaccines could harm children.

The film is directed by British former doctor Andrew Wakefield, whose retracted and debunked study of a dozen children asserted that there is a link between the measles, mumps and rubella vaccine and autism.

The three-part storyline of Vaxxed begins there, with Wakefield’s own research, followed by interviews with families of autistic children who believe vaccination caused the disorder, then what the film alleges is a cover-up of autism research at the Center for Disease Control and Prevention (CDC).

Wakefield’s research has been widely discredited. In 2009, The Sunday Times revealed that data included in a study published by Wakefield in The Lancet was likely altered, and several co-authors removed their names from the article. His license to practice medicine in the UK was later revoked, though these details were not given in the film.

Despite the small sample size of Wakefield’s study and its eventual retraction, the belief that vaccines could, somehow, be harmful has proved intractable. Thousands of parents across the UK and the US have opted not to vaccinate their children, or to slow down the vaccination schedule recommended by public health agencies. In some cases, unvaccinated individuals have started sporadic measles outbreaks, most recently at Disneyland in California in 2015 .

Around 9% of Americans believe that the measles, mumps and rubella vaccine, is not safe, according to the Pew Research Center . Across the US, rates of parents seeking exemptions from vaccinations has been as high as 6% in some regions, according to the Centers for Disease Control . In the UK, vaccination rates fell from 92% to 80% , following the release of Wakefield’s study.

“In Wakefield’s original [now retracted] study, he proposed a biologic mechanism, and each part of that has been disproven – so where is the link?” said Dr Philip LaRussa, a Columbia University Medical Center pediatrics professor, who studies immunology and recently served on the National Vaccine Advisory Committee, after seeing the film. “They give no biologically plausible explanation for a cause and effect.”

For many, especially those skeptical of vaccines’ safety, ostracizing Vaxxed from the Tribeca Film Festival appears to have validated the film’s conspiratorial conclusions, that “Big Pharma” doesn’t want it seen.

“It’s ok to ask questions, this dialogue, this conversation is OK,” said Dara, a 42-year-old mother of two unvaccinated children ages four and six, who wished not to have her last name used. “Why did I have to ask all the questions about is this safe for my son? … Nobody asked one question, I had to be the one to come to the table with all of this.”

“I have a different approach to health, it doesn’t start in a needle for me,” she said.

Another vaccination skeptic, Steve Thiele, a chiropractor and father of six unvaccinated children, said: “In order for people to make an intelligent decision they have to have all the facts. And I think the facts have been hidden from them.” He then quoted Vaxxed nearly verbatim: “If the autism rate continues to rise the way it is now we’re talking 80% of the boys by 2032 are going to be diagnosed with autism. That’s going to completely destroy our country.”